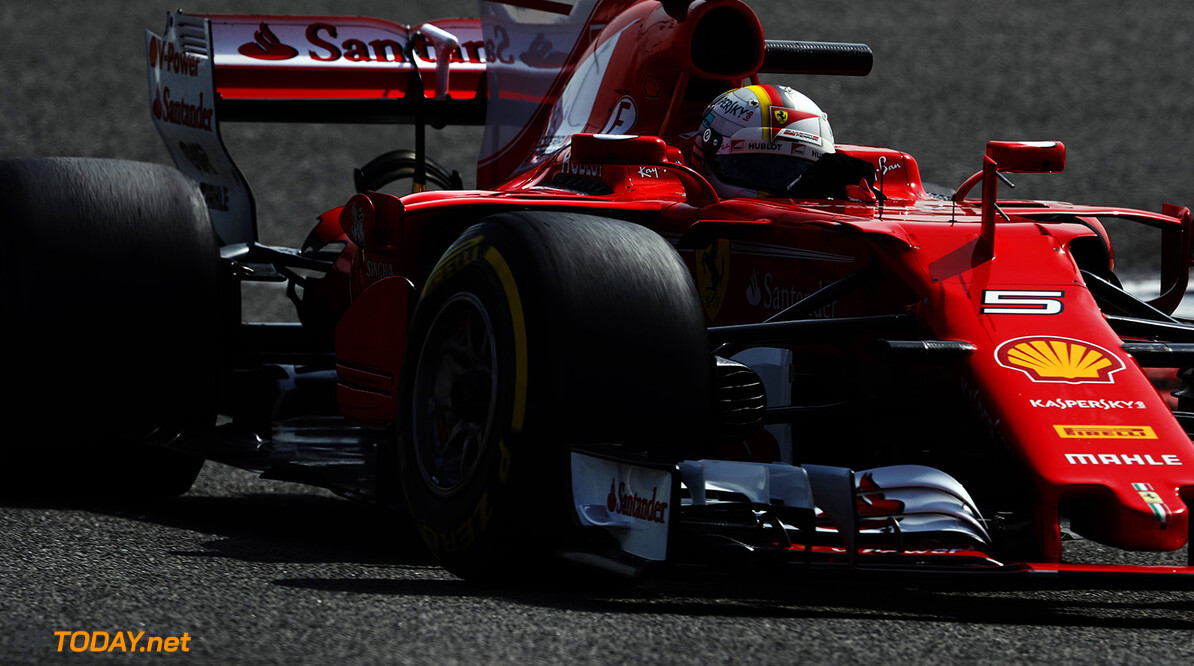 Sebastian Vettel has claimed pole position for the Russian Grand Prix, his first since Singapore 2015. Even more incredibly, Ferrari has claimed their first front-row lockout since the French Grand Prix of 2008.

Vettel set a 1:33.194 which proved to be unbeatable. His Finnish teammate Kimi Raikkonen was half a tenth slower, but it's the optimum result for the Maranello based team.

Valtteri Bottas out-qualified Lewis Hamilton for the second race in a row, as the two Mercedes drivers will line up third and fourth. Daniel Ricciardo was fifth, while his teammate Max Verstappen who could only manage seventh. Felipe Massa in the Williams split the two Red Bulls.

Hulkenberg was eighth while the two Force India's of Sergio Perez and Esteban Ocon finished ninth and tenth respectively.

Home hero Daniil Kvyat emerged from the pitlane first as the green light was waved, followed closely by the two Haas cars.

The track proved to be very busy as all drivers shuffled around looking for track position to set their fastest time. Kvyat set the first timed lap but it was beaten by Kevin Magnussen immediately, who was then toppled from the top by Kvyat's teammate Carlos Sainz.

The times continued to tumble as the front runners left their garages, with Bottas setting the fastest time, a 1:34.177. The Ferrari's felt confident to go out on the super soft tyres and were not too far away from the pace of the Mercedes despite being on one compound softer.

Hamilton slotted into P2 but was four-tenths of a second down on Bottas. As all the midfield runners were on their last flying lap, there was two separate incidents as Pascal Wehrlein spun, but was able to come away without any damage.

However, Jolyon Palmer wasn't so lucky as the Briton's miserable start to the season continued. He clipped the kerb at turn four and slammed into the barriers after losing control of the car meaning he couldn't improve and was therefore out of the session.

The session started as Jolyon Palmer's car was being cleared from the track and the two Williams drivers headed out first, Felipe Massa ahead of Lance Stroll. Massa set the opening time which was six-tenths of a second faster than Stroll. All drivers had now ventured onto the track, all equipped with the ultra soft tyre.

Daniil Kvyat and Carlos Sainz then split the two Williams drivers, before Raikkonen set a 1:34.053. Mercedes then appeared to strike a devastating blow as Bottas went eight-tenths faster, with Hamilton behind him. Vettel then slotted in behind the Mercedes drivers but did seem to be off the pace.

The battle for the top ten heated up and as Massa jumped up the timesheets, his teammate Lance Stroll couldn't improve and dropped out. Alonso struggled and will start fifteenth. Raikkonen set another fast lap which saw him go up to second, while Vettel's final lap had to be aborted as he made a mistake at turn 13.

The start of the final qualifying session almost saw drama as Nico Hulkenberg and Lewis Hamilton almost came to blows at turn three. Hulkenberg was attempting to get by the Mercedes up the inside, and it seemed as though the Mercedes driver didn't see him, however, the two escaped unscathed.

Kimi Raikkonen set the fastest time after the first run, followed by his compatriot Valtteri Bottas. It was a provisional all-Finnish front row start, however, there was yet to be a twist in the tale.

The cars came out for the final runs and it all looked so close between the four front-runners. Raikkonen looked set to improve until he ran wide at the last corner. His hopes of a pole position looked decent as Bottas rounded the final corner and failed to improve his lap time.

However, it was then Vettel who crossed the line to go quickest, obliterating Raikkonen's chances of his first pole position since France 2008. It was down to Hamilton to challenge Vettel but he failed to do so and will start tomorrow's Grand Prix from fourth on the grid.