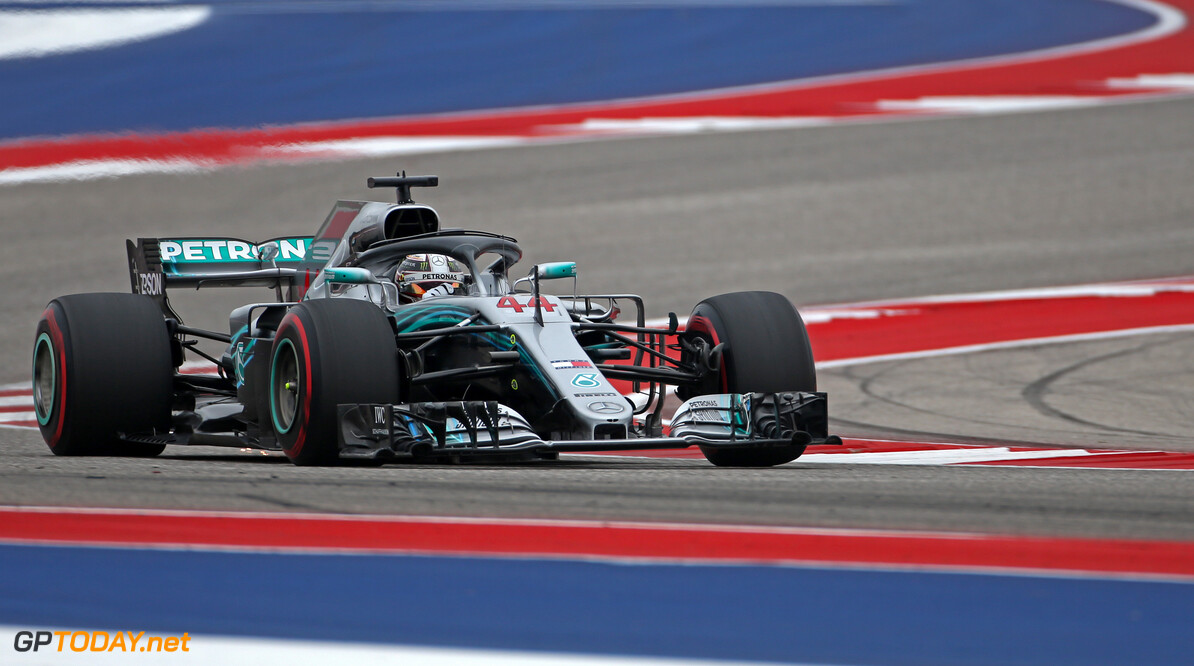 Lewis Hamilton has taken pole position for the US Grand Prix, beating title rival Sebastian Vettel by the finest of margins in Austin. Despite setting the second fastest lap time, Vettel will start the race from fifth on the grid following a penalty he received on Friday.

Hamilton will therefore be joined on the front row by Vettel's teammate Kimi Raikkonen. The top three were separated by just 0.070s after their final runs, which saw all three drivers improve on their lap times.

Vettel held the top spot following the opening runs of the session, but his time was then topped by Raikkonen. Hamilton just got the better of the 2007 world champion, which all but confirmed his pole position after teammate Valtteri Bottas failed to challenge.

Bottas ended the session almost four-tenths down on Hamilton. The Finn will be promoted to third place following Vettel's penalty, while Red Bull's Daniel Ricciardo will also be boosted up one spot into fourth to fill out the second row of the grid.

It wasn't a smooth day for the energy drink outfit however, as Max Verstappen ran into trouble. The Dutchman hit the kerbs on the outside of Turn 15, which snapped the wishbone on his right rear suspension. The incident happened at the end of Q1, after he set a time which saw him through into the second stage.

Vettel will line-up on tomorrow's grid in fifth place, and will be targeting to finish as high as possible in order to keep the championship fight going into Mexico. Should Hamilton convert his pole into victory on Sunday, Vettel needs to cross the line in second place, or he will see Hamilton become a five-time world champion.

Esteban Ocon won the battle in the 'best of the rest' fight and will join Vettel on the third row of the grid in sixth place. Just over half a tenth behind Ocon was Nico Hulkenberg in seventh, who will have Haas' Romain Grosjean for company alongside him for the start of Sunday's race.

Charles Leclerc once again demonstrated his impressive pace ahead of his switch to Ferrari for 2019, getting his Sauber into ninth place. Rounding out the top ten was Sergio Perez, who announced this week that he would be remaining with Force India next year.

Outside the top ten, Carlos Sainz and Kevin Magnussen failed to make it into Q3, but will have a free choice of tyres to start the race on which could benefit their strategies and aid them in overtaking the drivers starting on the ultra soft compound.

Pierre Gasly and Brendon Hartley made it into Q2, but did not set a lap time as they both will start the race from the back of the grid. Both drivers take on new power unit elements this weekend, and Gasly confirmed post qualifying that Toro Rosso had taken away the upgrades it introduced this weekend due a lack of data.

Both McLarens failed to advance out of Q1, with Fernando Alonso and Stoffel Vandoorne ending the session in P16 and P20 respectively. Sergey Sirotkin managed to get the better of his teammate Lance Stroll, with both qualifying behind Alonso, but ahead of Sauber's Marcus Ericsson.