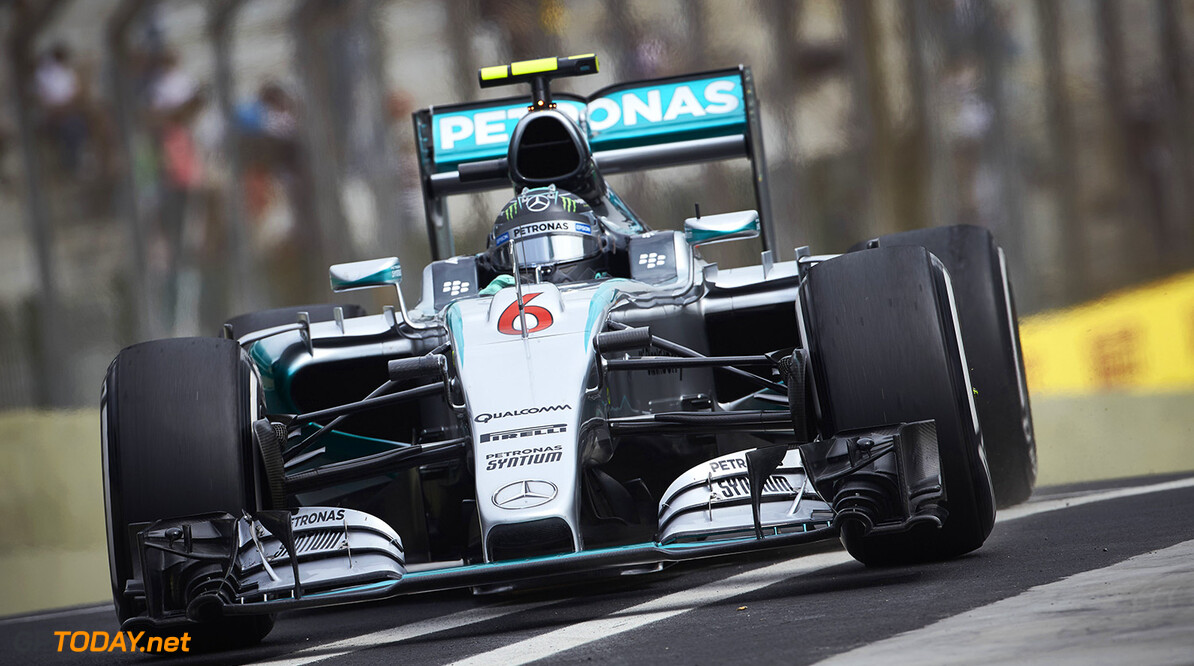 Nico Rosberg earned his 13th career win, cementing Second Place in the Championship with a controlled victory around Interlargos.

Lights are out and Hamiton makes initially better start, but he decides to switch from left to right, trying his luck around the outside of Nico Rosberg at Turn One. Due to the short run to the first corner, maybe Hamilton was better off staying on the inside and if he did, he could have jumped Rosberg.

There wasn't much separating the two drivers, what won the race today for Nico Rosberg was that when Hamilton closed in, under braking at Turn One, Rosberg pulled away in Sector 2 – where he had a clear two-tenth advantage over his compatriot. The Circuit's technical nature in the middle part is something that plays to Rosberg's strength and, therefore, he could afford to lose time through braking 25 metres early going into Turn 1. Whereas Hamilton the last of the late-brakers, took a more risky approach, although it frequently awarded him the time, however, he occasionally locked up his tyres, which led to a  lack of performance towards the end of his stints. The Same pandemonium occurred last year and it explains why Rosberg has been successful here two years in a row.

Ferrari adopted a reflective view of the race, believing that their pace was impressive. When comparing their speed to which they had back in Melbourne, they have indeed closed the gap towards their rivals Mercedes. Today Silver Arrows' plan was to 2-stop, but Ferrari's speed forced them into Plan B, which was to 3-stop

Vettel managed to finish under 10 seconds behind 2nd Place Lewis Hamilton. Whereas Kimi struggled with the option tyre and the car's handling.

Williams had a mixed race with Valtteri Bottas finishing fifth, but Felipe Massa ended up in eighth, but for him to be disqualified, which probably did not go down well with the Brazilian fans.

Williams are intending on appealing the decision, as they believe to have evidence that suggests that their three independent sensors prove that they were well within the temperature limits. The team are confident that the sensor that FIA use, was unreliable at that particular occasion.

Good news, though, despite the DQ, Williams have now secured 3rd place in the Constructors' Championship.

Sergio Perez was always going to have a tough race after having a poor Qualifying and in the race he had severe tyre degradation, which led to him finishing 12th – ending his three consecutive point finishes. On the flipside, his team mate Hulkenberg had a quiet but productive race, starting in 5th and finishing 6th. And what earned him a good points finish, was that he was able to make the two-stop strategy work - not many were able to do,

Romain Grosjean managed to put the emotions of what had happened in Paris behind him and he had a good race finishing 8th position. Both cars ran different strategies with the Frenchman having the most aggressive and it worked to a tee. Pastor Maldonaldo could have been alongside his team mate, but his drive-through penalty cost him that chance and he finished in 10th position.

That 8th and 10th means they earned a 3 point advantage over their rivals Toro Rosso for 6th place in the Championship. Lotus now go into the final race at Abu Dhabi in two weeks time with a 9 point lead.

Bernie Ecclestone told SKY Sports Pundit Martin Brundle that this race will have a surprise. And undoubtedly that Suprise had to be Max Verstappen's sensational overtakes on Sergio Perez and Pastor Maldonaldo. Taking on the might of the Mercedes Power Unit on the pit straight and then performing an audacious move going on the outside of turn 1. The Perez overtake indeed on the borderline and could have resulted in an accident, but thankfully they did not, instead, tapping ever so slightly when both cars were side by side. Ideally Perez should have yielded when going into turn 2, but both drivers were inevitably too stubborn to give up.

Verstappen's 9th means he has set a new Toro Rosso record of having six consecutive point finishes, a record that was previously held by Sebastian Vettel since 2008.

Carlos Sainz's bad luck continues after earning his 7th retirement of the season - through an electrical fault. His fate was determined when he stopped during the warmup lap and his team managed to get him back to the pits, but soon as the lights went out, he could only manage a handful of corners before stopping again. Any more retirements and he will be joining his fellow countryman Fernando Alonso on the deck chair.

Flipe Nasr felt he did not have a good race, finishing in 14th.. The team came onto the radio to congratulate him on his finish to which the Brazilian sarcastically responded with “What, how did that happen?”. Points were indeed possible after Carlos Sainz had a first lap retirement from 10th position, but unfortunately for Sauber he was plagued with overheating brakes throughout the race and was subsequently passed by everyone, except for Mclaren and Manor.

His team mate Marcus Ericsson also admitted that pace was good today for the Swiss Team, but the collision with Pastor Maldonado jeopardised his race and ended up finishing in 17th.

Both Mclarens were comfortably ahead of the Manors but just lagged behind the Saubers. Button almost had a chance take on Nasr towards the end, but the Briton did admit that he felt the car lacked the straight-line speed to perform a legitimate overtake.

Alexandre Rossi signed off his final race for Manor being beaten by Will Stevens to what was a close battle between the two. But most importantly the rumour of Dave Ryan is expected to take charge of the team as of Abu Dhabi.  To be confirmed, but it was something that circulated the paddock throughout the weekend. Ryan is someone who has earned his credentials at Mclaren years ago and is deemed to be an effective operator.

All the team needs now is a buyer and with a Mercedes Package for next year, then they could well be a serious outfit for the next few years.