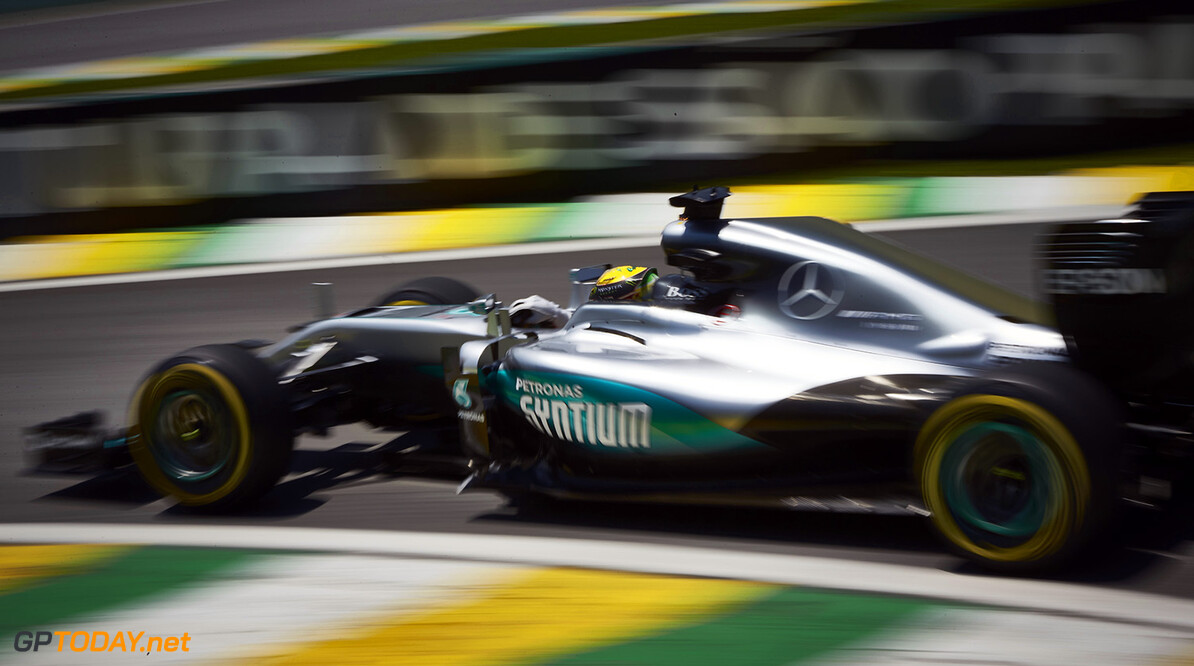 Lewis Hamilton has won the Brazilian Grand Prix after a number of weather-related delays.

His Mercedes team mate Nico Rosberg finished second ensuring that the title battle will go down to the wire in Abu Dhabi in two week's time.

As is often the case in Brazil, rain played a major part in proceedings. The race was initially delayed by 10 minutes, with the race beginning behind the safety car, despite pleas from drivers to start the race under normal conditions.

Before the race even began the rain claimed its first victim as Romain Grosjean lost control of his car going onto the start/finish straight while driving to the grid.

With the safety car start, everyone held station until the end of lap seven when the safety car peeled into the pits. Felipe Massa made the first move of the race, passing Esteban Gutierrez on the start - although he was soon slapped with a five second penalty for making the move too early.

Following the start, Hamilton built up a 1.2 second lead over a cautious Rosberg, while behind them, Max Verstappen had got by Kimi Raikkonen for third.

Racing continued until lap 13, when - with many drivers feeling the conditions warranted a switch to intermediate tyres - Marcus Ericsson crashed in almost the same place that had claimed Grosjean earlier.

The incident brought out the safety car again, and closed the pit lane because his car came to a rest at the entrance to it.

Verstappen, taking evasive action to avoid the stricken Sauber managed to sneak in before the closure, unlike his team mate Daniel Ricciardo who was hit with a penalty for entering the closed pits.

Once the debris had been cleared, and more laps were spent behind the safety car, the race was again allowed to restart on lap 20. This time the restart lasted merely seconds as Kimi Raikkonen lost control and crashed almost immediately.

The incident was a worrying one, as parts of Raikkonen's car struck Nico Hulkenberg's helmet and car, although both the German and his machine got away relatively unscathed. Manor's Esteban Ocon and Verstappen also escaped the incident despite looking like they too might crash.

After yet another delay, the race again resumed - minus Jolyon Palmer who sustained damage due to a collision with Daniil Kvyat on the previous restart.

The Renault driver claimed he couldn't see the Russian, and struck the side of his Toro Rosso.

This restart looked to be for real, but surprisingly, the race was again halted on lap 28, to a chorus of boos from the crowd, some of which were deciding to leave. At this point, the general consensus between the drivers was that the track was good to race on.

Nevertheless, another delay was on the cards, meaning half points and time-shortened race became possibilities.

On lap 32, after a fourth safety car period, the race restarted again for what would end up being the definitive time.

Hamilton again cruised out in front while Rosberg was hounded by Max Verstappen who got by the Mercedes in turn three with a bold move around the outside.

On lap 38 it looked as if Verstappen would be the next driver to crash out of the race after a big moment in the same part of the track that claimed every other retirement, but the teenager managed to recover. The incident consequently allowed Rosberg regain ground.

Before long, both Red Bulls pitted to change from wet to intermediate tyres. Meanwhile, Vettel and Fernando Alonso were showing shades of past championship battles as they fought for position, with the Ferrari driver coming out on top as Alonso was forced wide.

Rosberg came close to spinning on lap 45 but was able to carry on, unlike Massa who crashed out three laps later.

Like Ericsson earlier in the race, his car came to a stop at the entrance of the pit lane, closing it.

This ended up being quite fitting for the Brazilian's final Grand Prix on home soil. The Williams man waved to fans before taking a Brazilian flag from a marshal. The veteran then tearfully made his way down the pit lane where he was given a guard of honour from his former team Ferrari and Williams.

Inevitably, a fifth safety car was needed for Massa's crash but the race was allowed to continue.

Despite Rosberg being closer on the final restart, Hamilton was again able to pull away as the German held second from Sergio Perez. At the back of the field, Alonso spun but was able to recover, allowing the restart to continue as planned.

Nasr, set to score Sauber's first points of the year in fifth was passed by both Vettel and Hulkenberg, while both Red Bulls carved their way through the field after dropping back after their last pit stops.

Verstappen would eventually make his way up to third, passing Perez to deny the Force India driver an eighth podium - what would have been a Mexican record.

At the front, Lewis Hamilton took a relatively straightforward 52nd career win to move him ahead of Alain Prost into second in the all-time list. Rosberg consolidated second place to keep him ahead in the championship race, while Verstappen's stunning third saw him voted driver of the day.

Perez held on to fourth, ahead of Sebastian Vettel and Carlos Sainz, while Hulkenberg was seventh, one spot ahead of Daniel Ricciardo.

Felipe Nasr took a crucial ninth place. On home soil, he was able to secure his and Sauber's first points of the year, which move them off the bottom and ahead of Manor in the constructors' standings - something which could see them enjoy a £30 million windfall at the end of the season.

Fernando Alonso was able to recover to take the final points paying position, a consolation for McLaren as Jenson Button crossed the line last of the finishers again struggling with the handing of his car.

Behind Alonso was Valterri Bottas, Esteban Ocon, who looked set to score his first career points just days after being announced as a Force India driver for 2017.

Kvyat, Kevin Magnussen, and Wehrlein completed the runners ahead of Button.

Nico Rosberg now holds a 12 point lead in the championship going into the final round. Regardless of Hamilton's finishing position, a podium finish will guarantee him a first Formula One world championship crown.