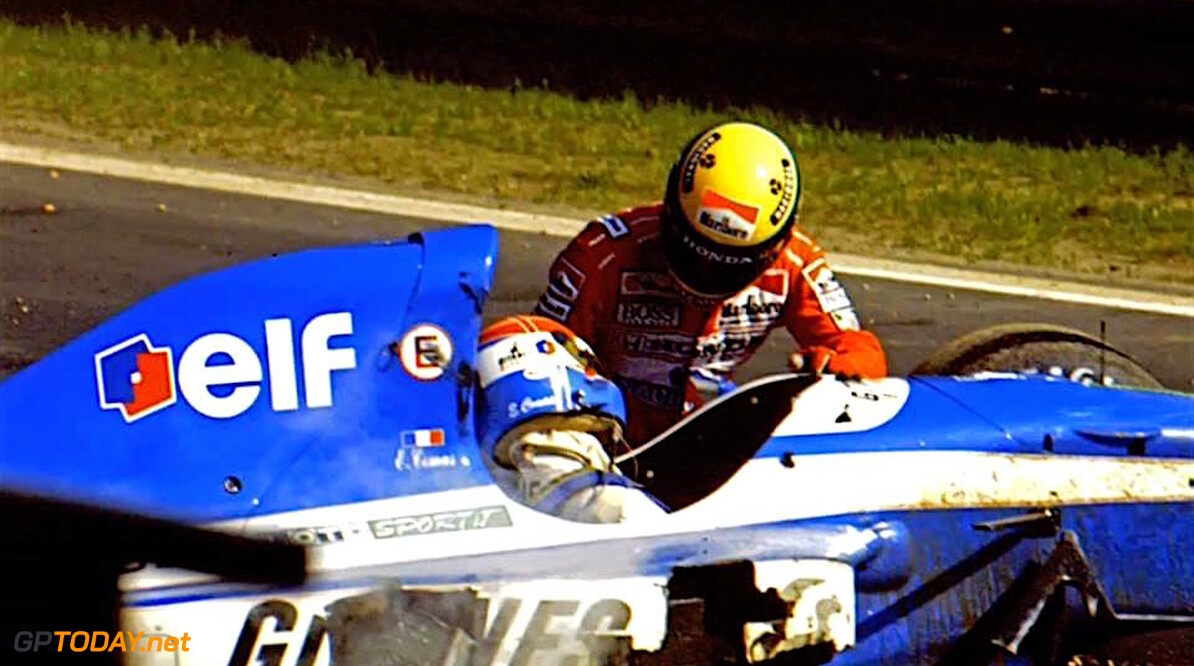 Ayrton Senna Special: Eric Comas: 'Hypocritical people knew during the race what was going on with Ayrton'

Eric Comas and Ayrton Senna have a history together. When the Frenchman drove in Formula 1 at Ligier in 1992 he crashed heavily during a practice session for the Belgian Grand Prix. Ayrton Senna was the first driver to see the crashed Ligier on the asphalt. Senna decided to get out and help the Frenchman. In an interview, Eric Comas gives his views on the events of 28 August 1992 (the day of his crash) and the weekend at Imola, at the end of April and beginning of May 1994.

"I had the disadvantage of being the first to go around this corner (Blanchimont) and from the moment that I drove through the corner I can't remember anything. I drove straight into the guardrail.

"I watched the video afterwards because I couldn't remember at all what actually happened. A few seconds before the accident, my memory didn't save what had happened. My right front wheel hit my helmet and I was knocked out. The car returned to the track after the crash and I kept pushing the accelerator somehow."

"You meant that your foot kept the throttle pressed down?"

"Yes, I was unconscious in the car but I still had my foot on the accelerator.

"Ayrton then drove by and stopped as soon as he heard that my car was still revving. The engine was still running at 7000 to 8000 rpm. He took off his belts and ran over the road to me between the oncoming cars. Cars were still driving at a slower speed because they were showing yellow flags.

"He came to the cockpit and looked for the main switch to turn off the engine. At that moment there was a risk of explosion because a lot of oil and gasoline was leaking from the car. Nobody knew what would happen if the whole thing had caught on fire."

Could it be that the whole thing would explode?

"That's likely, Ayrton saved my life at that moment."

About two years later, you were sitting next to him at the pre-race briefing at Imola, right?

"Indeed, on May 1, 1994, for the first time in my career, I sat next to him during the driver briefing. We were all in shock because of the events of that weekend. There had already been a tragedy. We had the crash of Rubens (Barrichello) and the fatal accident of Roland (Ratzenberger) on Saturday. I had the feeling that everyone was in shock, what had happened there didn't seem real."

Was Ayrton hit by both accidents?

"He was definitely hit, he was also the one who made the remark that something had to be done to prevent these kinds of accidents. I don't want to say that a certain emotion caused Ayrton's accident because he showed emotional weakness during the meeting. I don't believe in that. We were all touched by death and I think the feeling of us was everything that we would miss someone on the grid for the race.

"When I arrived at the Tamburello bend I saw the helicopter, the ambulances and Ayrton's car. They were all there. I saw that Ayrton was already on a bed and I stopped my car."

You stopped the car in the middle of the track, just before the helicopter?

"Yes, I was in the middle of the runway just a few meters from the scene of the calamity. When I just arrived it looked like a bomb had exploded in Tamburello. There was a very strange atmosphere in that area and without knowing the details at that moment, I knew that something very bad had happened.

"A certain paralysis hit me because I was standing next to the man who had saved me from death two years earlier. At that moment there was nothing I could do and I felt terrible. I had the feeling that I came too late, I am not a doctor but I knew that he was in much worse shape than me in Belgium two years earlier.

About the possible stopping of the race

Did you think the race should have been stopped?

"The race continued because the FIA could not determine by law whether Roland Ratzenberger had died on Saturday at the circuit. We had no voice in this. We were informed very late. For example, I only heard at the airport that Ayrton had died.

What is your opinion about the party after the race?

"It was a big scandal what happened there, I've heard it from other people. I didn't see it myself because I was on my way to the airport. It was one of the biggest scandals ever, especially because a lot of people were hypocritical at the time. Everyone knew what the situation around Ayrton was like at the time. Then the entire history of the ceremony after the race was covered up by the FIA. At the time, they did everything they could to cross the line and lose their own credibility."