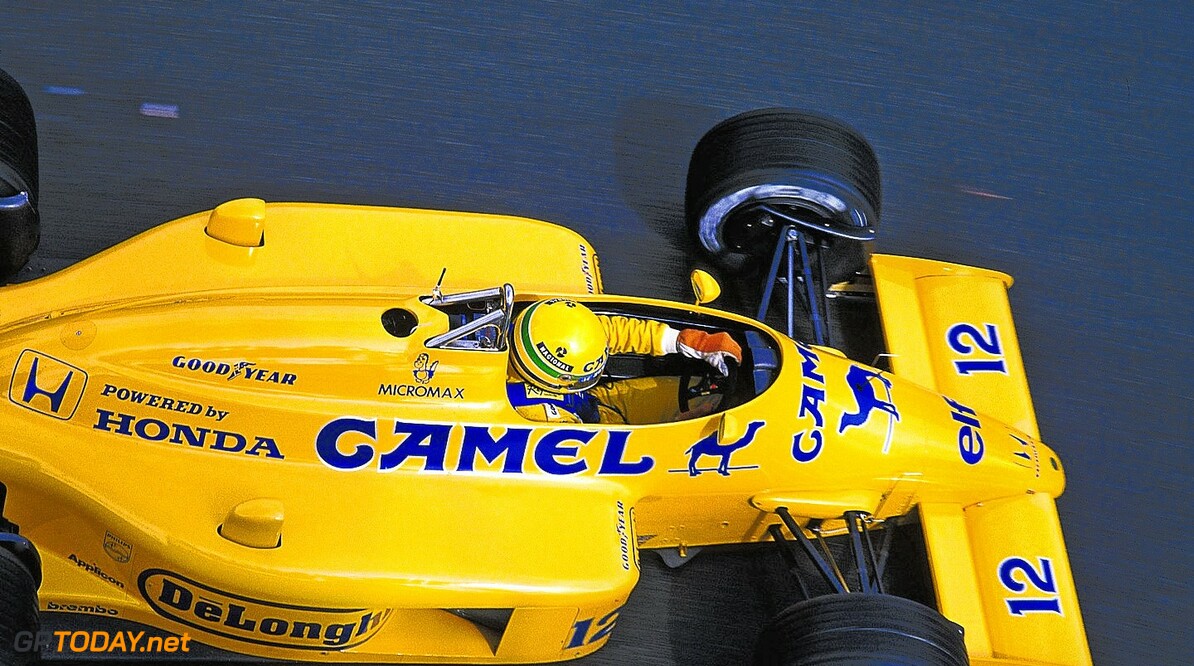 Riding against the powerful Williams Honda combination with the RA167E engine was an impossible task for the challengers of the British team. This also applies to Ayrton Senna and his Lotus Honda RA166E. However, we cannot consider 1987 as a lost year. Lotus had equipped its 99T with the active suspension system. A system that the Lotus should benefit from, especially on the fast circuits.

Ayrton and Lotus were 'best of the rest' and the dominance of Williams was especially noticeable at the beginning of the season.

From the first Grand Prix in Brazil on the Jacarepaguá circuit, it became clear that Williams was more than two seconds faster than their pursuers in qualifying. Ayrton was 2.280 seconds behind Nigel Mansell, while world champion Alain Prost in the McLaren-TAG was 3.047 down. It was an unbelievable difference in which we would like to point out that according to the current 107% rule only 14 drivers would appear at the start. Slowest man Ivan Capelli in the March-Ford gave was 17.452 seconds of the Brit.

The home race would end in another drama for Ayrton. Despite the fact that he had good speed in race trim during the opening race, the active suspension turned out to give Lotus headaches. Eventually, the car became unmanageable and Ayrton decided to make a tyre stop. Immediately after this stop he dropped out on the 51st lap with an engine problem. A strange thought, since the 1986 Honda engine was a very reliable one. Immediately the speculation started that Ayrton handled the material too 'wildly'. The next Grand Prix at San Marino was a better one. Pole position and a second place behind Nigel Mansell was the maximum possible for the Lotus.

During the third Grand Prix of the year, at the circuit of Spa-Francorchamps, the Lotus lost more than one second in qualifying. It was no reason for Ayrton not to be a candidate for the victory. He made the best start from third place on the grid and went into the first lap as the leader. Mansell followed and tried to attack halfway through the first lap on the outside of Fagnes. Ayrton kept the line and made contact with the Briton.

"Mansell is on the outside line and Senna is in trouble," was James Hunt's live commentary. "He is taking Mansell into this action. It's a dirty action because Ayrton Senna is driving Nigel Mansell out of the race here. It was all Senna's fault, a very big blunder from Senna who continues with his bad form of last year." The race had already stopped in the third round of the race due to a serious accident between Jonathan Palmer and Philippe Alliot. After three races Ayrton found himself back in fifth place in the championship with 12 points behind the surprising leader Alain Prost.

Yet Ayrton would show at Monaco and Detroit that there was enough speed in the Lotus. Ayrton won both races and even took the lead in the world championship after the race at Detroit. He would keep the lead until the French Grand Prix where he finished fourth. In the course of the season he finished third at Silverstone, third at Hockenheim, second at Hungaroring, second at Monza and second at Suzuka. The year ended with a disqualification in Adelaide.

Even with the 1986-specification engine, he had races in which he could have scored more points. The idea that Piquet became champion with a constant series of second places and that his advantage over Piquet after the Detroit race was eight points, showed that the championship was closer together than would have been expected after the first race in Brazil. Piquet claimed eleven podiums during the 1987 season, Mansell seven. Mansell won six races but in the end he was defeated by teammate Piquet.

Particularly at the end of the season, the Lotus 99T ran into development problems. For example, Ferrari with Gerhard Berger behind the wheel had made a spectacular leap forward, but the Lotus was not fast enough. This became painfully clear during the qualifying sessions in Hungary (6th) +2.340 seconds, Austria (7th) +2.135 seconds, Mexico (7th) +0.706 seconds and in Honda's homeland Japan (8th) at 2.681 seconds. There was no more pace in the Lotus and the 1986 specification for the Honda engine was not further developed.

The fact that Ayrton, with less material and a car in development concerning an active suspension system could still become third in the championship, was a talking point. This also attracted the attention of Honda. The Japanese manufacturer had made a deal with McLaren to give them exclusive Honda engines for 1988. Senna was high on the wish list of Soichiro Honda and McLaren was also interested in the Brazilian. Soichiro Honda and Ayrton started their friendship in 1987, it would be the basis for Ayrton's love for the Japanese brand.