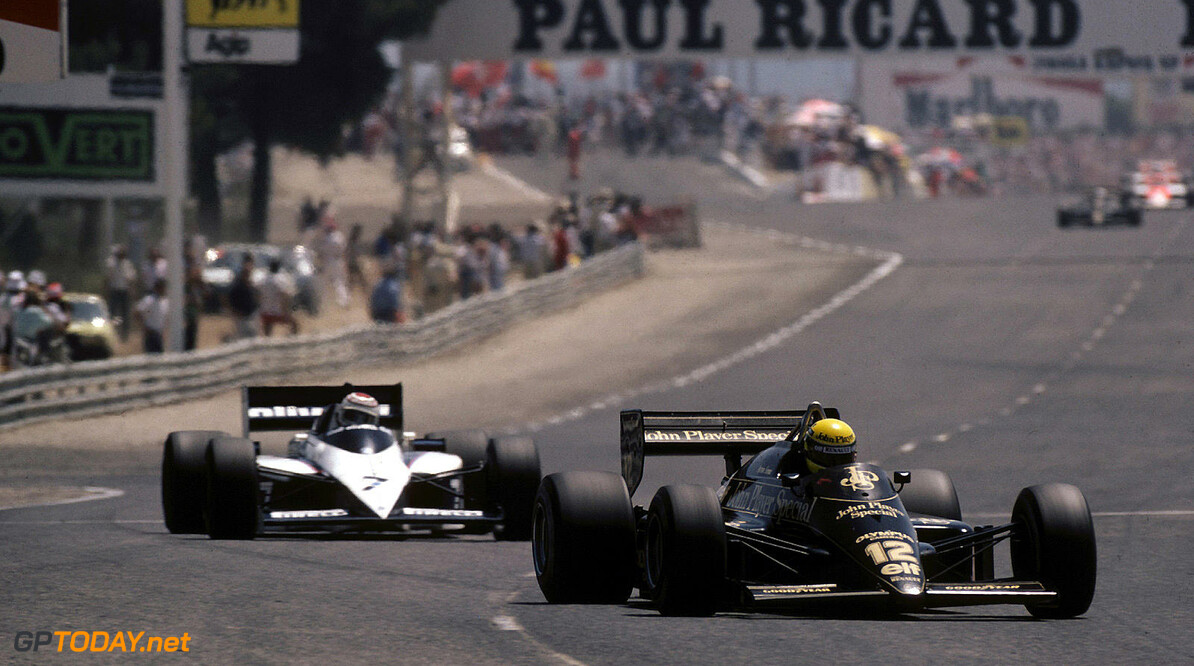 Ayrton Senna Special: Part 18 - Ayrton with Lotus - An unfortunate first half of the season (1985)

Ayrton had to deal with an incredible amount of bad luck during the first half of the 1985 season. In the previous edition, we published an interview in which Murray Walker asked Ayrton if the Lotus was built only for the qualifications. During that race in Estoril, Ayrton was supreme, but the weather conditions did not show how reliable the Lotus was. Over the course of the season it became painfully clear that the 97T left much to be desired. Yes, the car was very fast in qualifying trim, but had many problems during the races.

After his first pole position in Portugal it was two weeks later at Imola where he was once again on top. He was 0.027 seconds ahead of Keke Rosberg's Williams-Honda at the San Marino circuit. Prior to the season, the FIA had pushed thorugh a statement regarding fuel consumption. The 1.5-litre Turbo engines were only allowed to carry a limited amount of fuel. During the first Grand Prix of the season in Brazil, nothing was noticeable. The second race at Estoril was a rain race and during the third Grand Prix of the year, the calendar visited Imola. This circuit was known for its high fuel consumption. On Sunday, May 5, 1985 there was initially no problem for Ayrton.

After an excellent start, he drove away from the field. Teammate de Angelis followed in second place. It looked like Ayrton would win his second Grand Prix victory in succession at a dry Imola. But it wasn't going to be that easy. Alain Prost in the McLaren-TAG closed the gap to Ayrton.

Ayrton drove strategically smart and by overtaking the backmarkers at the right moments, kept a buffer with Prost. Prost kept putting pressure on Ayrton who had to give up a lot of his fuel reserve. This would become clear at the end of the race. Prost started driving from a distance after he had put pressure on the car and settled down. At the start of the last ten laps, Prost decided to save even more fuel.

Stefan Johansson came closer and eventually passed the Frenchman. Johansson was too far behind Ayrton and a victory seemed imminent until at the end of the 57th laps he suddenly got a stuttering engine. Ayrton tried to get some fuel into the tank by moving back and forth, but eventually the car stopped. It was an almost start to finish victory.

During the next Grand Prix in Monaco Ayrton drove to pole position again. The Brazilian raced away from Nigel Mansell at the start and quickly drove away from the field until his car failed on the 13th lap. In the middle of the tunnel, the Renault engine gave up. For the second Grand Prix in a row, a victory was taken away from Ayrton. The next chance of a result was destroyed in Canada by a turbo problem. Ayrton qualified second behind teammate de Angelis, but lost five laps after repair work.

The Brazilian was the fastest for the rest of the race. He scored the fastest lap and finished in 16th place. In Detroit, Ayrton drove to pole but had to make a pit stop at the beginning of the race. When he came in after several fastest laps on the tail of Michele Alboreto, he choked himself in a catch-up action. Senna ended up in the wall and his hope for a podium place was gone.

During the French Grand Prix Ayrton was again on the front row. He made a good start and was able to maintain his second position during the start of the race. After seven laps he was passed by compatriot Piquet. Ayrton made a pit stop and came back on the track. After his pit stop, he had gearbox problems and finally he retired.

During qualifying, Ayrton drove to fourth place on the grid. Maybe a setback, but it should be noted that Keke Rosberg's Williams-Honda was the fastest on the straights all year round. The configuration at Silverstone at the time is also completely different from today's circuit. Ayrton was seven tenths slower in total, but saw Alain Prost and Nelson Piquet just one-tenth ahead. Ayrton made a great start and was the first to enter Copse corner.

He was in the lead for most of the race, but fate struck at the end of the race. The unreliable Renault engine showed its curse. A broken exhaust prevented Ayrton from taking advantage of his full boost. Prost passed him quite easily. Ayrton had a big advantage over Alboreto and set himself up for second place. This wish became a nightmare, with five laps to go Ayrton eventually had to pull over on the straight. He got out of the car for the umpteenth time this season.

"A bitter pill", Murray Walker stated during his comment for the BBC. Converted, the reliability problems at Lotus Ayrton had already cost 37 points. Given the fact that Michele Alboreto was the leader in the championship after the British Grand Prix and he got several points because of the failure of the Brazilian, a possible lead in the championship would have been enormous. But this did not happen in the end.

The striking thing about all failures was that teammate Elio de Angelis finished the first seven Grands Prix of the year. There was speculation in the British media that Ayrton would overload the equipment.