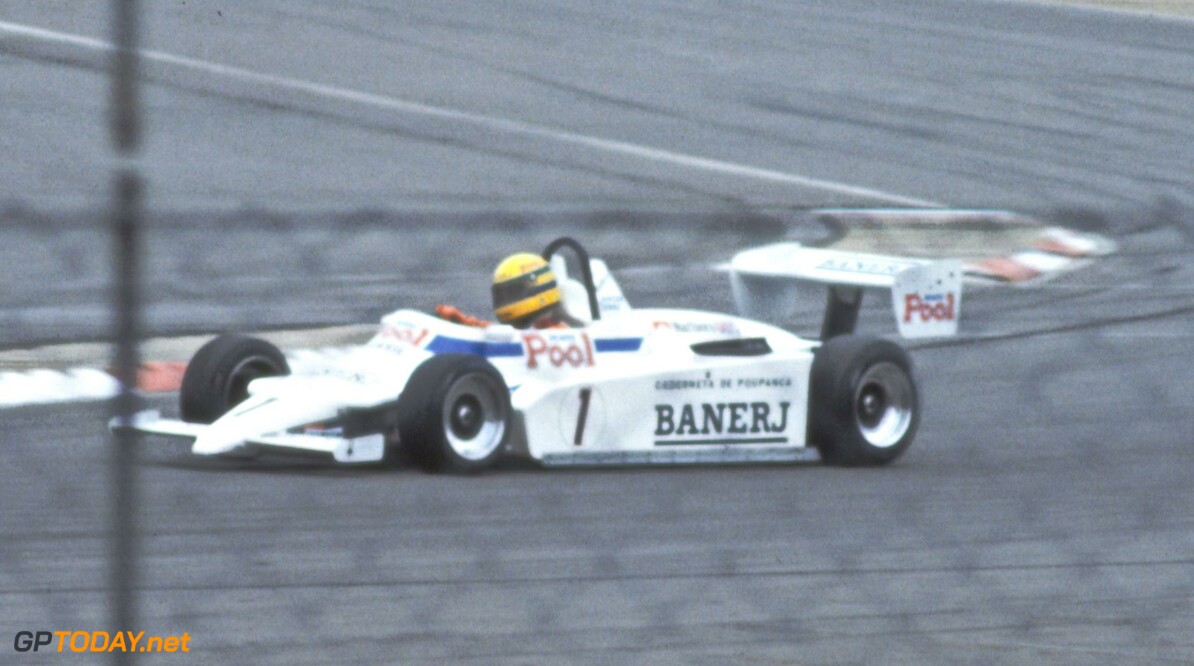 In 1982, Ayrton was introduced to a Formula 3 car for the first time. It was Eddie Jordan who gave him the chance to compete in a Ralt RT3/82 at Silverstone. Ayrton was the driver that most teams, in the summer of 1982, were fishing.

"That test at Silverstone was really incredible," Eddie Jordan said at a later time. "We were in pole position in the Formula 3 race at the Silverstone Club Circuit earlier that year. Da Silva (his name at the time) came into the car and was within 15 to 20 laps up to speed."

The mechanic of Eddie Jordan Racing in 1982, Alastair MacQueen, said the following during an interview for a special film: "It was an eye-opener for us. Within 20 laps he drove faster on the Silverstone Club Circuit than any other driver has ever done. Then he started to explain how we could improve the car.

"He told us that because he thought there was more to get out of the car, he also told us he could get more out of himself. He thought the car was good in fast corners, but asked for more mechanical grip to take the Woodcote corners better. I realised that he was very special."

The first race in a Formula 3 car

The race at Thruxton immediately showed that Ayrton was a class apart from his competitors. His qualifying time of 1:13.34 was immediately four tenths faster than Martin Brundle's time three weeks earlier in the British Formula 3 championship.

Ayrton was also the only one who was able to ride under 1:14.000. During the race, the Brazilian again demonstrated that he was in a class of his own. He was in the lead from start to finish and at the end of the race, was thirteen seconds ahead of Bengt Tragardh.

Eventually, after several tests, Ayrton decided to choose West Surrey Racing. Dick Bennetts, the team owner of the English team, said: "We were given the opportunity to have Ayrton participate in a non-championship race at the end of 1982. This he won.

"I really wanted him but there were several hijackers on the side. Eddie Jordan came with many different proposals. I couldn't take that personally, I'm not a 'Wheeler Dealer'. I made Ayrton one proposal. He shook my hand and the deal was made.

Neil Trundle, from Neil Trundle Racing, later admitted that he tried to tie Ayrton down for 1983: "We didn't have a really good basis. I wanted to convince Ayrton via Chico Serra to choose us. Once he came with his wife to the workshop of Project 4. Chico told me that this was Ayrton Senna and that he would become a future Formula 1 world champion. I could not immediately offer him anything at that point."

The start of a new season

The 1983 season started on March 6. At Silverstone, the first race of the championship was held on the Club circuit, where Ayrton had his Formula 3 test for Eddie Jordan in the summer of 1982. Pole position went to David Leslie, who was two tenths faster than Ayrton.

Ayrton eventually won the race by force majeure. Bennetts would later say: "He had been looking forward to this race for a long time and the pressure was fully on him."

Senna said at the time: "I think there is a lot more in the car. I just have to drive more out of the car to improve the setup."

The victory, which came after a hard fight with David Leslie, was the perfect start to the season for West Surrey Racing and Ayrton Senna. Martin Brundle finished second, more than six seconds behind. Davy Jones finished third.

After the race at Silverstone, he tested at Donington Park and Silverstone. As Ayrton had already indicated, it was important to drive the car more. These tests were based on getting to know his car from start to finish. During the second race, seven days later at Thruxton, Ayrton returned to the circuit where he won his first Formula 3 race in 1982.

On that day, March 13, the world was also introduced to his skills as a rain driver, a speciality that the Brazilian had taught himself in karting. Despite achieving a pole position and a race win, Ayrton was not satisfied yet: "I had a problem with the car. This one did not exceed 5,600 rpm".

During this race, Ayrton had to deal with Martin Brundle for the first time. The young Englishman turned out to be a good match for the Brazilian. Brundle finished less than one second behind him. Mario Hytten, who finished third, finished at almost 48 seconds back. It soon became clear that Senna and Brundle would be the top favourites for the championship.

But the fact Ayrton could also damage a car became clear during the test at Snetterton between the second and third race of that year. Nevertheless, the Brazilian arrived at Silverstone in good condition. During the rainy qualifying session, Ayrton was supreme and drove the fastest time in qualifying.

After a poor start, he lost the lead to Martin Brundle, before he passed the Briton on the outside of the Hangar Straight. Brundle would later say that this action was quite brilliant. In a wet race, Ayrton's victory would still be in jeopardy due to Jorma Airaksinen, who lingered behind.

Because the rain came down harder and harder the organization decided to stop the race. It was restarted with six laps to go and the results of both 'heats' would be added together. Brundle took the lead again and Ayrton was in the pursuit.

Senna finally caught up with Brundle by going over the grass with two wheels. "Incredible", Brundle stated later. At the end of the race, Ayrton's fire extinguisher exploded in the car, but it didn't stop him. Ayrton won by almost two seconds ahead of Brundle. Calvin Fish, the only driver who could beat him in his Formula Ford 2000 period, finished third.

Domination in the first part of the championship

"I didn't feel good at all, but the car was good and I made no mistakes," he said after the race. The races still had a lot of attention from the public, partly because the fights for third place were good. But there was no match for Ayrton Senna.

In the first nine races he drove in 1983, he won all nine. Yet there was a tilt in the season. The Brazilian travelled between the races of Brands Hatch (8 May) and Silverstone (30 May) to Brazil. Senna had already done this at an earlier stage of the season (between the fifth and sixth races) in April.

The second round trip to Brazil took just over a week. Ayrton was in the process of signing sponsorship contracts in his home country. It was also in that period that Eddie Jordan Racing and Martin Brundle found something in the car. That would eventually turn the whole course of the championship completely upside down.

After nine races Ayrton had scored 88 points, only two less than the maximum number of points. Brundle had 54 at that time. With nine points for a victory and one point for the fastest lap, Brundle was more than three race victories behind the Brazilian halfway through the season.