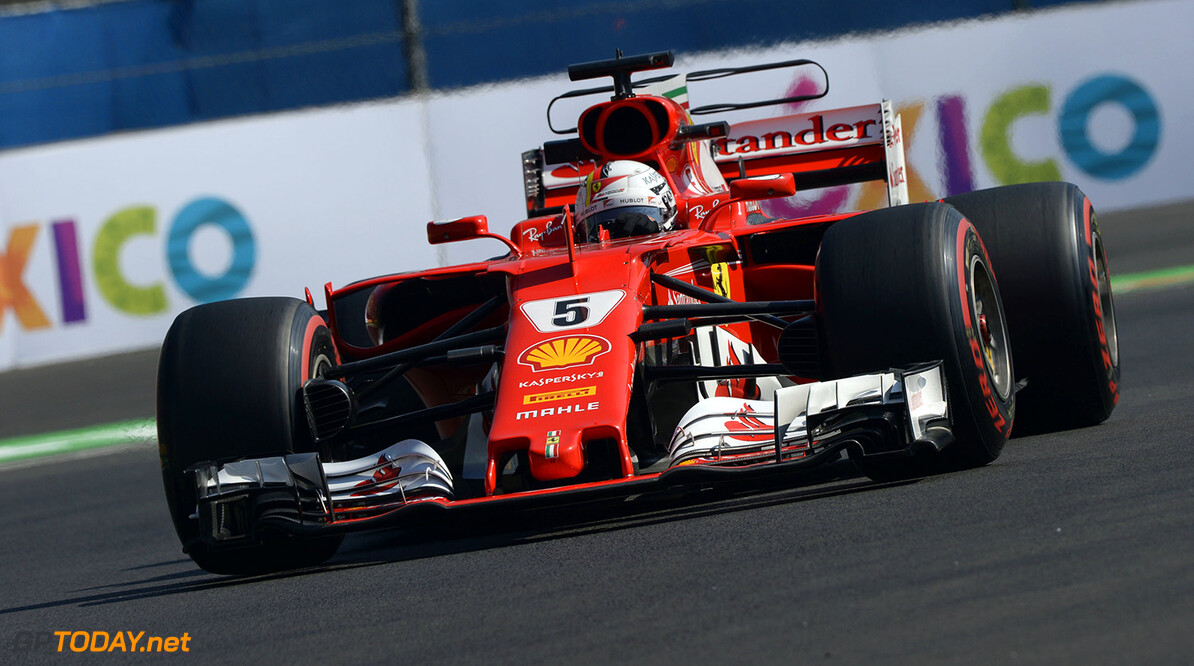 Ferrari's Sebastian Vettel took an impressive pole position for tomorrow's Mexican Grand Prix, taking it away from Max Verstappen in the dying moments of qualifying after the Dutchman looked set to take an impressive first pole position. Championship leader Lewis Hamilton took third place for the race in a position that would see him win the world championship should he maintain that place.

Verstappen produced a lap that was initially half a second quicker than anyone in Q2 and looked set to put his Red Bull on pole for the first time only to be denied late on by Vettel on his final run. The Mercedes cars of Hamilton and Bottas never really looked to challenge for pole position, both finishing four tenths away from Vettel.

The two teammates of the front row starters, Kimi Raikkonen and Daniel Ricciardo both had qualifying sessions to forget however, a long way from their teammates, with Ricciardo even beaten by the impressive Esteban Ocon who was quickest of the midfield runners.

The two Renaults of Nico Hulkenberg and Carlos Sainz and the Force India of Sergio Perez completed the top 10, with Hulkenberg taking the first blow in the hotly anticipated qualifying battle between the new teammates at Renault. Perez would have been disappointed however to only qualifying tenth and behind his teammate in his home Grand Prix, and will be expected to do better in the Grand Prix tomorrow.

The Toro Rosso of Pierre Gasly was confirmed before qualifying to not be taking part in qualifying, so there a little bit less pressure on the teams around the cut off for Q2 such as the Haas and Sauber cars, who looked most likely to struggle through qualifying

Both Ferraris and Red Bulls set early laps on the super softs aiming to get through on the harder compound of tyre, with both Mercedes cars on ultra soft tyres, going to the top of the time sheets. The Ultra soft tyres were the choice of the field, with everyone on the softest compound apart from the McLaren of Stoffel Vandoorne who was seemingly only looking for a representative time as he was due to start from the back of the grid regardless of qualifying.

After the first runs it was the Haas and Sauber cars as well as Vandoorne looking on the edge of q1 as has been the trend through the weekend, with stroll and Hartley potentially also under threat, with Wehrlein initially in fifteenth after the early running, and aiming to get a Sauber out of Q1 since Baku.

In the end it was the Sauber and Haas cars knocked out in Q1, confirming the poor pace of the Haas cars that has been shown this weekend, who both finished behind the usual backmarking Saubers, with Vandoorne the one to escape the bottom five of the people in danger after bolting on a set of ultra soft tyres.

Going into Q2 the battle looked to hot up with the red bulls Ferraris and Mercedes all looking to put down a marker to grab pole position. Both Mercedes cars and Ferraris set good laps before double yellows came out for the breaking down Brendon Hartley, adding insult to injury for the Toro Rosso team, who suffered their second break down of the day and ruining the laps of most of the other cars behind.

However the yellow flags didn't hinder Max Verstappen as after the double yellows flags he set a storming lap to go half a second quicker than anyone else, stunning the rest of the field and showing the first real marker of pace of the weekend.

Both McLarens and Williams' didn't set an early lap, with McLaren not running at all due to their impending grid penalties and Williams opting to go for just the one run. The Williams' would have been hopeful of knocking off the Renault's and force India's who look to be by far the best of the midfield runners at this track.

However after both Williams' cars set their one timed laps in clear air but both failed to set a time good enough to get into Q3, and with McLaren not going out and Hartley already gone the battle, for Q3 was rather over before it ever really started. None of the drivers really improving on their second runs with the rising track temperatures, with Verstappen looking unbeatable after his Q2 lap.

Q3 looked to be a rather ominous task for anyone trying to prevent Max Verstappen from a first pole position after his storming lap in Q2, with everyone needing to up their game to match his Red Bull.

It was Verstappen again the quickest on the first runs, going quickest in all three sectors with Vettel his closest contender but over a quarter of a second away from the young Dutchman's time, with Hamilton in third with Ricciardo some way off his teammates time in fourth.

Ocon was the quickest of the midfield runners after the first runs in an impressive fifth place with the Ferrari of Kimi Raikkonen and Mercedes of Valtteri bottas behind him, and perhaps even more impressively ahead of his hometown hero teammate Sergio Perez.

In the final runs Hamilton couldn't improve his time after running wide and stayed third but Vettel produced an impressive lap to take away what would have been a first ever pole position away from Max Verstappen. Both Mercedes couldn't challenge the two front runners but will be looking to secure a fourth consecutive world championship double tomorrow.