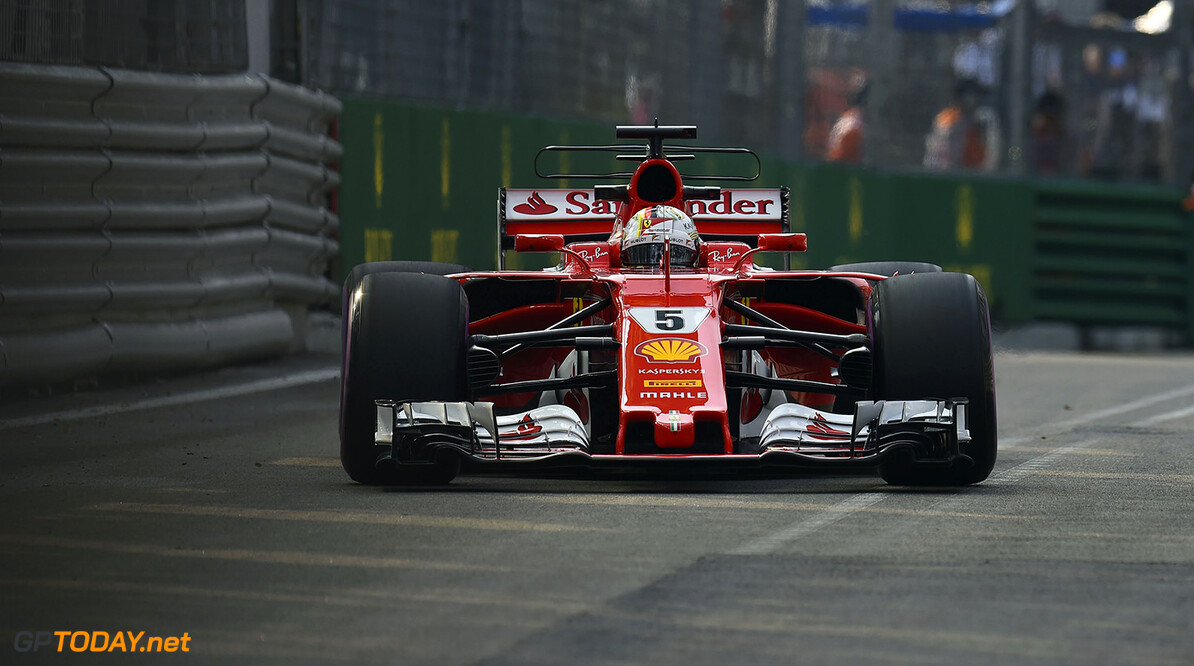 Vettel on pole for the Singapore Grand Prix

Sebastian Vettel will start the Singapore Grand Prix on Sunday from pole position after edging out the competition during qualifying and setting a lap time of 1:39.491. The German takes his third pole of the year and his fourth around the Marina Bay circuit.

Vettel ended up being dominant around the track, as his lap was over three-tenths faster than Max Verstappen who will start the race on the front row alongside Vettel. Daniel Ricciardo could only manage third after some tipped the Australian as the favourite to take the spoils this weekend.

Kimi Raikkonen was fourth, but crucially for Ferrari, he was ahead of both Mercedes. Championship leader Lewis Hamilton ended the session in fifth place, leading teammate Valtteri Bottas, with the gap between them seven-tenths of a second.

Nico Hulkenberg once again demonstrated the strong pace that the Renault chassis contains, as his fastest time put him in seventh place. McLaren was always going to be strong on this downforce dependant track and will start the race from eighth and ninth, with Fernando Alonso getting the better of Stoffel Vandoorne. Rounding out the top ten was Carlos Sainz.

When asked where did his lap time come from, pole-sitter Vettel said: "I don't know. I struggled also this morning. I shouted as loud as the crowd. It was unbelievable. I love this track. The car was tricky but was getting better, better and better. So pleased we got it done. I need to calm down. The car was amazing. It;s an amazing track when you feel the car was coming together. I knew we had it in us but we had to get there."

Singapore marks the first event this season that Sebastian Vettel hasn't entered at the top of the championship, but will surely be looking to re-take the lead after the Grand Prix tomorrow, as rival Hamilton could only set the fifth fastest time.

The tight and narrow streets of Singapore were always going to be a struggle for Mercedes, and team boss Toto Wolff says that it was no surprise the Silver Arrows were the third best team: "It's what we expected. You always hope for better, but it's probably where realistically we are in Singapore."

The Ferrari's and Toro Rosso's were the first drivers to take to the track as the light went green. The final sector was very slippy as a car from a support series caught fire and laid down some oil before qualifying got underway.

As the first laps were set, Raikkonen was the first to go on top, with a 1:44.0. His teammate Vettel followed him, with Daniil Kvyat and Sainz trailing behind the German. Romain Grosjean made a series of mistakes and twice took a trip down the escape road during the session.

As the oil was hoovered up and rubber was laid down, the times began to tumble as Verstappen and Ricciardo traded fastest times. Felipe Massa then hit the wall at Turn 21 and received a puncture, but managed to rejoin the track with no suspension damage.

Sainz and Kvyat leapt up into third and fifth as the track became much quicker, and both McLaren's also set times that got them well inside the top five. The Ferrari's and Force India's got close to the drop zone but didn't enter the bottom five, and safely made it through to the next part of qualifying.

In the first runs of the quicker teams in what is set to be a three-team battle for pole position, it was the Red Bull of Verstappen setting the pace on a 1:40.379 with Vettel in second only a tenth and half off of his pace. Ricciardo went third followed by the Mercedes' who somewhat seemed to be struggling initially.

At the end of the session all of the top 5 seemed to converge on each other, with Raikkonen, Hamilton and Ricciardo all setting much better laps than their first efforts to see all of those drivers, plus Vettel and Verstappen, split by only a quarter of a second.

Drivers out in Q2: Palmer, Perez, Kvyat, Ocon and Grosjean

As the light went green for the final time in Singapore for qualifying, the two McLaren's were the first out. Fernando Alonso popped in a 1:41.9, but Raikkonen was the first of the front-runners to set a lap time, which came in at a 1:40.0.

Verstappen momentarily went into first place until Vettel came across the line to set a 1:39.6. On the second runs, Verstappen and Raikkonen came back out first followed by their respected teammates and the two Mercedes.

Raikkonen appeared ready to make gains on his fourth place but a mistake saw him back off the lap early. Verstappen also couldn't get a lap together and didn't improve on his final attempt, but Vettel flew around the track and went over a tenth quicker to secure his 49th career pole position.