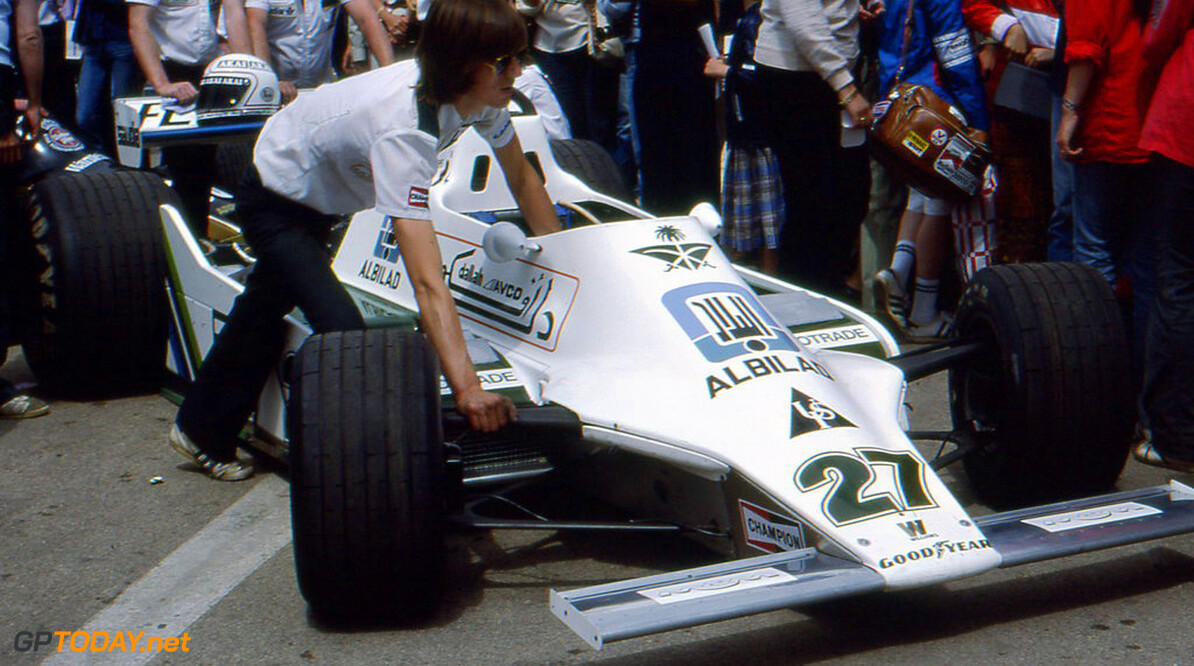 By the end of the 70's, the Williams Formula One team was in financial trouble. The team was low on funding and  lacked any significant success. Frank Williams needed to find himself some new sponsors. Meanwhile, by the end of the 1977 season the team was trying to find its way around as cheap as possible, forcing the mechanics to eat at the buffet whch was meant for guests and businessmen. While they were at it at the buffet, Frank Williams ran marathons to raise money. But this only helped to some degree. He and technical director Patrick Head decided to fly to Saudi-Arabia, were the streets were paved in gold. After a few fruitful conversations with some significant Saudi-Arabian entrepreneurs Williams and Head returned to Oxfordshire with Saudi-Airlines and Albilad-hotels as the new main sponsors. Even though these sponsors took with them a huge sum of money, a disputable name made its way onto the 1979 Williams FW07's livery: Bin Laden. Albilad's founding father, Mohamed Bin Laden, was the father of no other than Osama Bin Laden. Mohammed himself had died in 1967, a few of Osama's brothers continued the family business. The main company, Saudi-Binladen, was a construction and engineering company responsible for a lot of Saudi-Arabian infrastructure. The Williams F1 team did become successful though, winning the 1980 drivers title with Alan Jones taking the Albilad-Williams to a total of five Grand Prix victories. How disputable was this sponsoring? Not that much. Mohammed Bin Laden had 126 sons. Osama was ousted by his family due to his radicalisation, while most of the Bin Laden family emigrated to the USA and Europe, continuing their successful businesses. This part of the Bin Laden family has never been accused of having ties with Osama's Al Qaeda. However, when Alan Jones was reminded about this he did wish for Osama to have dropped by in the paddock, only for Jones to run him over.

is what Jenson Button and Takuma Sato must have thought when they strapped themselves in their BAR-Honda for the San Marino Grand Prix on the Imola circuit in 2005. Pre-race inspection by the FIA stewards showed that the car weighed in at 605kg, the minimum, but legal. In the post-race check on Button’s car, however, the stewards discovered a little secondary fuel tank which, after draining, left the car six kilo's below the minimum weight. Illegal. The FIA was infuriated and disqualified both BAR’s from the San Marino classification and the following two races. What was the idea behind a secondary fuel tank? Pretty simple, actually. With the extra six litres added, the car was at legal weight at the start of the race. During the race however, they would burn up the fuel from the secondary fuel tank, making the BAR run six kilo's lighter than the competition. During the last stop (often deliberately scheduled late in the race) the team would top the secondary fuel tank off, bringing it back at legal weight. With this system, the BAR’s were able to run lighter than any competitors for at least half of the race. BAR appealed to the FIA verdict. They could have gotten disqualified for the entire season, but the FIA had no evidence showing any structural and deliberate cheating. BAR's explanation? They needed the extra six litres to get the Honda V-10 started. Smart.

La Signorina F1, la pilotino, mother Teresa. Earlier this month, Maria Teresa de Fillipis passed away at the respectable age of 89. De Fillipis was the first woman who made it to the starting grid of a Formula One Grand Prix, which was at Monaco in 1958. Even though her free spirit was never reluctant to face off anyone who stood in her way, she was loved by many contemporary racers. They heralded her guts, her loyalty, sharp mind, passion and courage. She stood aside drivers like Juan-Manuel Fangio, Luigi Musso (who was very much charmed by De FIlippis beauty) and the soon-to-be world champion Mike Hawthorn. De Filippis enjoyed success in GT-racing, making quite the impression on the Maserati management. They contracted her as their works driver. Coming from a well-respected family with the status of Italian nobility, De Filippis was financially strongly supported. Mentally as well, as she proved to be able to compete with male drivers ever since her father gave her a Fiat 500 at age 22. Shortly after, she won a race on the mountain roads along the Amalfi coastline. For the 1958 season, De Filippis bought her own Maserati 250F, the same one that took Fangio to his fifth world championship in the previous year. While most of the drivers enjoyed De Fillipis’ determination, not everyone was as enthusiastic about seeing a female driver entering Formula One. The French circuit director told her that the only helmet a woman is supposed to wear is the one they get at the hairdressers. Even though De Filippis was unable to do anything about this, she was well capable of keeping her posture in this macho world. She drove five Grands Prix in total, managing to finish tenth in the Belgium Grand Prix. After the death of Luigi Musso, Mike Hawthorn, Peter Collins and her 1959 season team boss Jean Behra, De Filippis turned her back to Formula One. She was sickened of everyone getting killed. She became an active ambassador in 1978 when she joined the Club International des Anciens Pilotes de Grand Prix F1. This organisation was meant for former F1-drivers to become acquaint with each other, exchanging their legacies. How did she view the current Formula One? "I don't really like the modern racing so much. Very little remains of the sport we knew when all the drivers were friends and spent time together. I watch some races on television but so much of what the modern drivers say is so predictable. Maybe they are not as free as we were in our time."