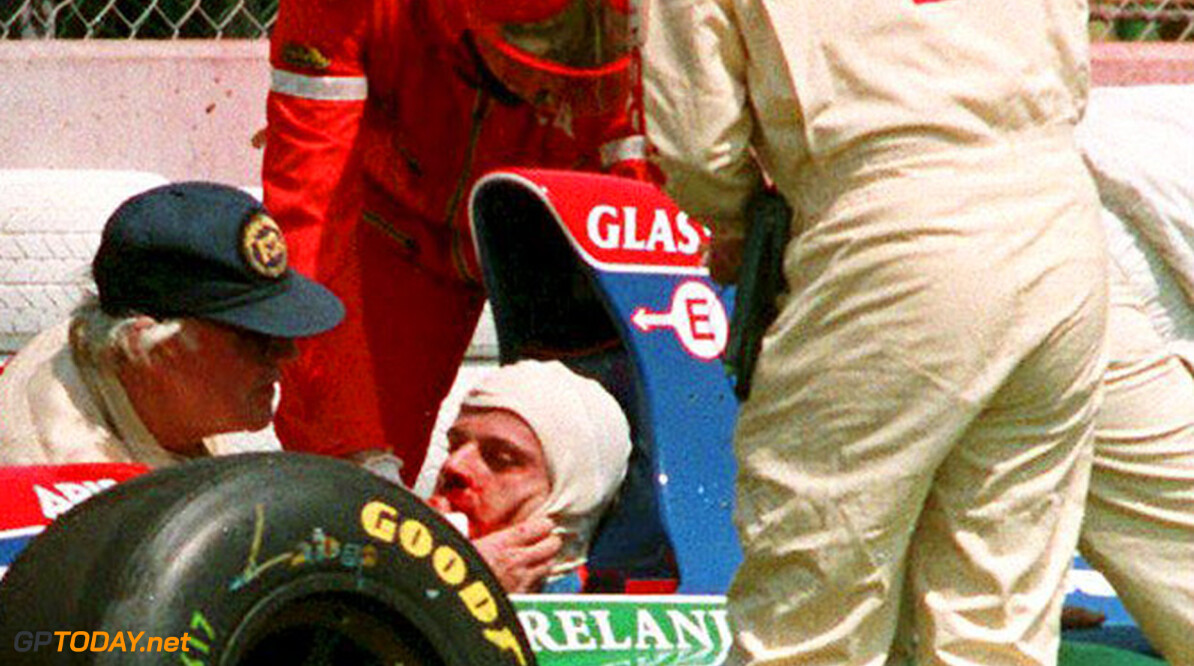 History: No one wants his child to see a racing driver die on television

"On sunday morning just before the race I said to him: 'You are the fastest guy around, why don't you quit?' He said: 'I can't quit, I have to go on.' Maybe I should have been much more severe with him, but then you know, you’ve got responsibilities to all those boys, and they were boys to me."

In the documentary 1 - Life on the Limit (2013) an emotional Sid Watkins tells us the last words he exchanged with Ayrton Senna before the San Marino grand prix of 1994. Sid Watkins, the iron man with an impeccable professionalism that stood for nothing but the safety of dozens of Formula One drivers, cracks in front of the camera and wipes the tears from his cheeks. They were his boys. Boys who, according to Watkins, were blessed with the absence of brains to be able to get into these driving coffins. Twelve years went by in Formula One without a single fatal accident. The racing cars were little like the moving fuel tanks of the seventies when it comes to safety. The carbon-fibre monocoque, the front-wheel suspension placed in front of the driver, and the reinforced fuel tanks. A certain amount of confidence brought some arrogance to the drivers and constructers and the cars were becoming dangerously fast. A certain amount of immortality was felt now that the Formula One was obviously in a period of unprecedented safety. It was almost too good to be true and at some point it had to go wrong. It couldn’t get much worse than the weekend of the first of May 1994, the San Marino grand prix. Rubens Barrichello tempted faith during the Friday qualifying session by crashing his car while exiting the Variante Bassa at 225 km/h, leaving him unconscious. Saturday, the Austrian Roland Ratzenberger missed the apex of the Villeneuve curva due to a damaged front wing, sending him into the concrete wall at 300 km/h. He passed away in hospital due to heavy brain damage. The next day, race day, Ayrton Senna went straight of the track at Tamburello and slammed the concrete barrier at a speed of 211 km/h. Millions of viewers around the world and of all ages watched as RAI's helicopter images showed Senna’s last twitch while sitting unconscious in his Williams. The medical helicopter with Senna on board took off fifteen minutes later, leaving nothing but a large puddle of blood, visible to everyone.

This shouldn't be happening, right? We are way past the time that the Sunday broadcasts could as well show a Formula One driver heading for certain death in his primitive chassis with an engine strapped on the back, are we not? Gary Hartstein, Watkins' successor from 2005 up until 2013, is asking himself these questions during an exclusive interview for a YouTube channel. "If this happens again the prime ministers of the countries that we go to are going to say no, you are not doing this in our countries anymore. This is crazy." And so it was up to Max Mosley, the new FIA president, to start an investigation regarding the events of that weekend. He introduced a package of aerodynamic changes with immediate effect to slow the cars down and introduced the Expert Advisory Safety Committee, which was given the task to do research for a safer sport. It was headed by Sid Watkins. The Expert Advisory Group (EAG) was going to be the final and definitive turning point in the safety of world motorsports. Watkins of course started a medical revolution by changing dozens of Formula One racetracks and its organisations. By 1994 the circuits were matured in this respect. The EAG was going to walk down a different road. Henceforward, new safety regulations were to be tested in a scientific manner. Ideas were now to be proven by experiments which would result in the collection of data. If that data supports the initial idea, implementation could commence.  And so a lot of engineers and scientists were contracted by the EAG to research aspects like the monocoque, chrash helmets, impact force, etc. Safety measures by the EAG are for example the enhanced crash helmet, the side-pod crash structure, the high cockpit sides and the HANS-system. The EuroNCAP is also an example of an EAG initiative. Direct changes after the San Marino grand prix were the reduced pit-lane speed, no pit-crews were allowed outside the box during racing except for pit-stops, wooden skid-plates were installed to check for ride height and diffusers were further simplified to ban any form of ground-effect.

The FOCA versus the FISA

In the meantime, what has become of Ecclestone and his relationship with Sid Watkins? The past two parts of this story showed that he was a human veto for whenever Watkins’ was unhappy with track conditions and facilities. Pay attention, this is a very short summary. Since the early seventies, Ecclestone owned the Formula One commercial rights and seated himself at the top of the FOCA. The FOCA was the organisation in which all the constructers defended each other’s interests like the splitting of the prize money. The FOCA became more powerful than the Commission Sportive Internationale (CSI) which was the organizational representative of the FIA in Formula One. The FIA made the charismatic Jean-Marie Balestre the head of the CSI to counter Ecclestone's growing power. Balestre turned the CSI into the Fédération Internationale du Sport l'Automobile (FISA). This resulted in the infamous FOCA-FISA war of the early eighties. The 1981 Concorde Agreement ended this tug-o-war by giving the FOCA the responsibility for all the commercially related aspects of the sport, while the FISA itself would focus on the regulatory aspects of the sport including the medical services offered by Sid Watkins. In 1991 Max Mosley became president of the FISA and president of the FIA in 1993. He abolished the FISA and put the Formula One under direct control of the FIA. Henceforward, Watkins had to plead his responsibility to Mosley and the FIA, not to Bernie Ecclestone. That also explains why the safety measures after the San Marino grand prix were initiated by the FIA and not by Ecclestone.

Dr. Gary Hartstein was Watkins' student and bound to be his successor when Watkins removed himself from his position as medical delegate at the end of 2005. Hartstein's career as medical delegate in the FIA Formula One circus was not to be without problems. Hartstein tells us in the interview that he learned a lot from Watkins, except patience. He wanted to push hard to form a sort of worldwide standard for medical practices at any racetrack. He started to write a manual for circuit doctors, which was a brilliant idea considering the fact that the Formula One circus was going to expand to countries that had no experience in organizing motor racing events whatsoever. Grands Prix were to be held in Bahrain, Singapore, India, South-Korea, Abu Dhabi, etc. Hartstein invited several doctors to write chapters specializing on certain aspects of circuit preparations and the managing of medical facilities. He handed the manuscript to the FIA who left it collecting dust for the next five years. By writing the book, Hartstein became politically involved in FIA policy that was being subdued to a political face-off between the French and the English representatives. Hartstein’s efforts were not appreciated. Withouth patience, Harstein pushed his ideas further by developing an online community for racetrack doctors worldwide to share stories, comments, questions, how-to’s and general information. Hartstein handed a total of 1200 names in favour of this community over to Jean Todt, who was infuriated. Hartstein was degraded to be an assistant. Trying to find a way to blackmail Hartstein, Todt accused the former of giving an unauthorised interview and threatened to fire him. Hartstein had formal evidence that the interview was authorized and escaped the firing squad. However, Hartsteins career as a medical officer ended when he tried to advise the FIA delegates that they had to perform thorough research into the flammable political situation in Bahrain in 2011 to be able to ensure the safety of all the personnel, teams and drivers. Jean Todt was beside himself and subsequently Hartstein's contract wasn't renewed. Although fired from his position as medical delegate, Hartstein continued to chair the FIA Safety training Working Group.