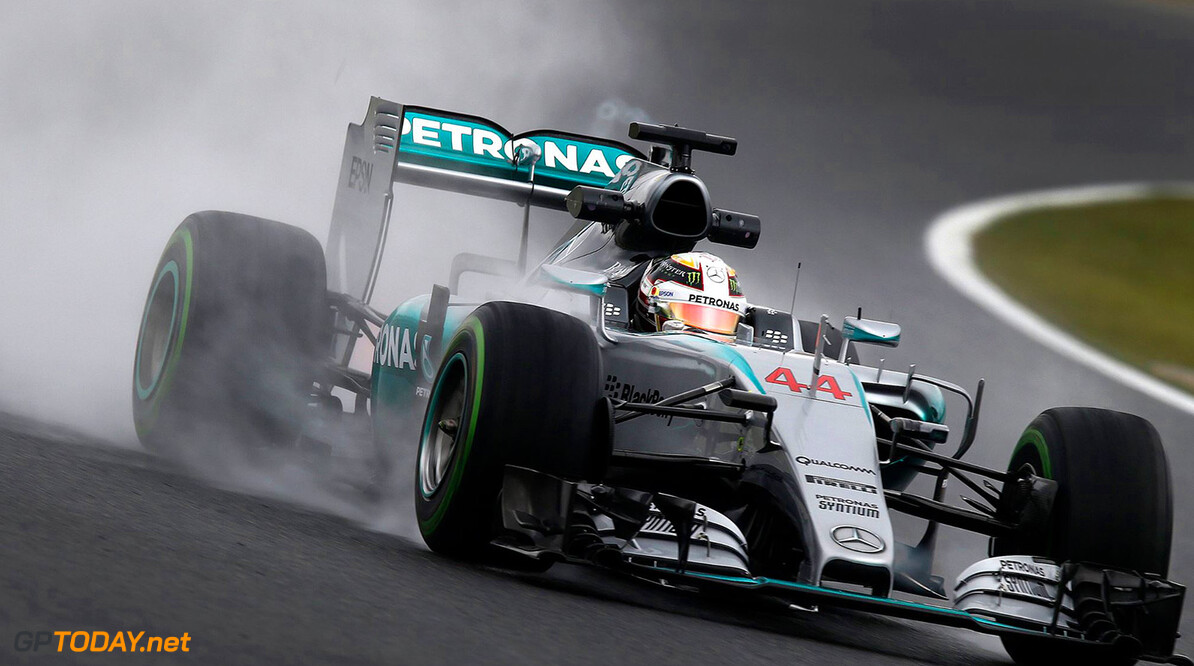 Lewis Hamilton won the japanese grand prix at Suzuka, Japan. The briton started from second place at the grid, and forced team mate and pole sitter Rosberg out wide in the first corner, and remained unchallenged under the entire duration of the race. He has now scored 41 victories, and has reached the amount of wins his idol Ayrton Senna managed to claim under his Formula 1 career.

The maneuver Hamilton performed on Rosberg enabled both Vettel and Bottas to overtake Rosberg in the first corner, but through good pace and a successful undercut during a pitstop Rosberg managed to finish second. By the time Rosberg got to second place Hamilton was too far away for the german to catch up, and the cap between them was more than 18 seconds when Hamilton reached the chequered flag.

Ferrari's pace were alot better than earlier shown this week, with Vettel grabbing another podium for the prancing horse and Räikkönen finishing 4th. As predicted by Ferrari, their car did not appear to be competitive enough on this track, as neither Vettel or Räikkönen could compare with the pace of both Mercedes' cars.

Williams had a good weekend, with Bottas starting on 3rd ahead of Vettel and Massa starting 5th ahead of Räikkönen, but an early collision with the Red Bull of Ricciardo left Massa and Ricciardo limping back to the pits. While both drivers managed to continue the race, but could not catch up with the top 10, and Ricciardo fninished 15 and Massa ended up 18th. Bottas had a good race, but could not hold his ground against either Ferrari car, and he finished 5th.

Ricciardo's team mate Daniil Kvyat could have had a better race, as he faced reliability issues with his Renault power unit and could not use full power under the entire race. He finished 13th, leaving Red Bull without the potential points their otherwise good weekend strongly hinted at. On the other hand, Red Bull's sister team, Toro Rosso, had a decent race, with both Verstappen and Sainz finishing in the points, 9th respectively 10th.

Starting from 13th, Force India's Nico Hulkenberg had an excellent start to his race, and leapt from 13th down to 7th right off the bat, partially helped by Massa's and Ricciardo's incident. He managed to finish in 6th place, one of the best results Force India has had on Suzuka. Team mate Sergio Perez, meanwhile, did not have an as good race, and were stuck behind a stubborn Ericsson under a long period of the race, until the swedish driver took a corner slightly too wide and the Mercedes' powered mexican could overtake the Sauber driver. Ericsson later let go of Kvyat aswell when he tried to let a lapping Räikkönen past, and finished P14, while fellow Sauber Felipe Nasr had to retire. Nasr was the only driver to retire under this race.

Lotus had a good race, with both Grosjean and Maldonado finishing in the points. They have now reduced the gap to Force India slightly. Unless anything is heard from Renault soon, the team is expected to face a potential breakdown tomorrow, when they are to stand in court over economic disputes with suppliers they are indebted to.

McLaren once again had a tough race, with Button ending 16th and Alonso ending 11th after showing off a good fight with the Red Bull of Kvyat and Toro Rosso's Verstappen. Alonso were furious with the lack of power he had during the race, calling the Honda unit a "GP2 engine". McLaren thus failed to claim points on engine supplier Honda's home track. Honda meanwhile, has apparently revealed plans on changes they want to make ahead of the next season, with one propoed change apparently being a larger, less compact design.

Manor had little chance at being competitive under this race, even if they for a while raced Ricciardo and Massa after the two driver's incident. Aside from Will Stevens getting a penalty for speeding in the pit lane and Alexander Rossi having a scary spin right in front of his team mate Stevens, who nearly crashed into Rossi, their race was relatively uneventful.