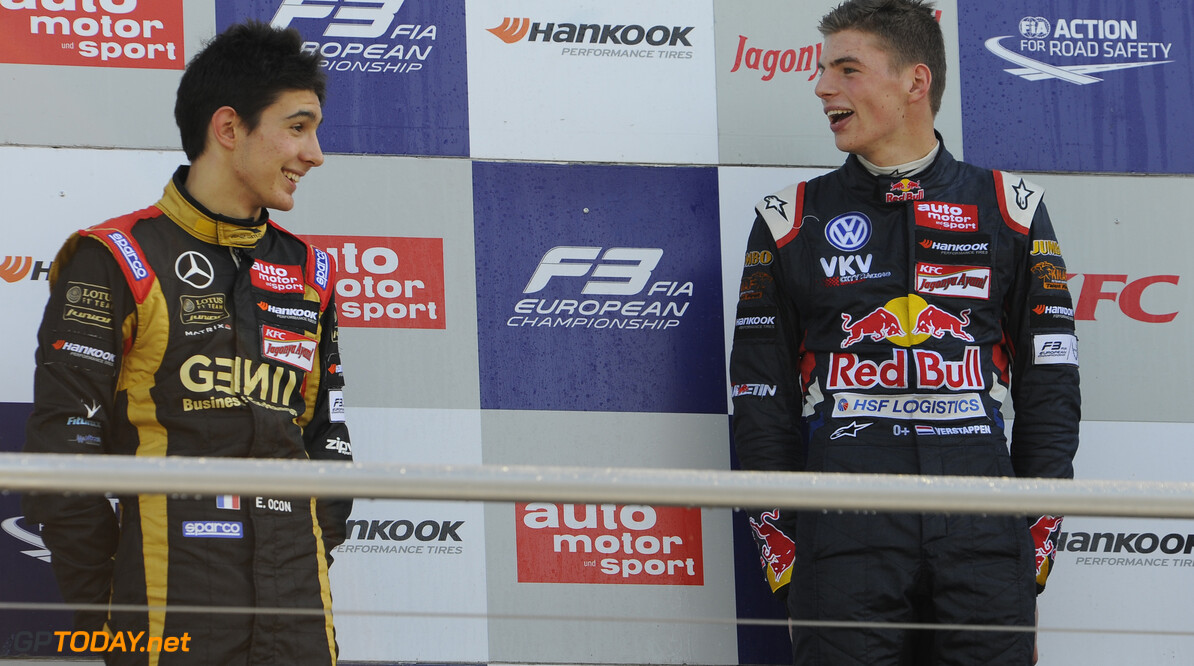 Ocon: Verstappen gaining F1 promotion in 2015 was hard to swallow

Esteban Ocon admits he found the news that Max Verstappen had signed for a Formula 1 team in 2015 “difficult to swallow”.

The pair battled each other throughout their junior careers, and both competed for the European Formula 3 championship in 2014.

Ocon ended the season as the champion with Verstappen finishing third in the drivers' standings, however the following year Verstappen progressed to F1 with Toro Rosso, while Ocon moved to GP3.

Writing in a column for Formula1.com, Ocon spoke about the first time he remembers facing Verstappen on a race grid.

“I think the first time I raced with Max Verstappen was in 2010,” he said. “It was a tough year for me transitioning into international racing. Karting is very tough anyway. I was alone with my dad pretty much fighting the big teams.

“Max and I were always quite close on track and sometimes it came too close! In 2011 we were fighting for the 2011 world series championship and he won in the end.

“I remember a race in Italy I came out on top, but me and him were a long way ahead of the rest. It was a rivalry which started then, and it soon became even bigger.”

After joining the Lotus F1 junior team in 2013, his rivalry with Verstappen was elevated as both of them climbed the competitive ladder.

Ocon says the competition between himself and the Dutchman returned after a handful of rounds into the 2014 F3 season.

“After a few races, the competitive rivalry returned. Max started to become strong and he was challenging me for wins and suddenly he was the guy to beat,” Ocon said.

“We had a thing called the ‘triple record’ where you would win all the races in a weekend. He did that once and then I did it in Moscow at the following round!

“We were fighting to get that all the time. In that Moscow race he came close to beating me and we banged wheels a couple of times, just like the old karting days.”

Ocon admits it was 'tough' seeing Verstappen graduate to F1

Ocon says it was a “tough moment” to see the news that Verstappen would progress straight to F1, while he was left behind in the junior categories.

“I won the title in Formula 3 but the tough moment for me was that Max had signed a deal to race Formula 1.

“Well done to him, definitely, but when I saw the news it was difficult to swallow. He was third in the championship; I was winning, and I didn’t have a seat in any category at that time.

MORE: Horner: Drivers will be 'rusty as hell' when F1 returns
MORE: Monaco loss in 2016 'haunted' Ricciardo for two years

“I did a few tests in GP2, but there was nothing really confirmed. The Lotus F1 junior programme had difficulties at the time and I wasn’t going anywhere, so it was quite a challenging moment.”

Ocon eventually graduated to F1 in 2016 with Manor before joining Force India in 2017 alongside Sergio Perez.

In Ocon's penultimate race with Force India in 2018, he made contact with race leader Verstappen while trying to unlap himself, resulting in a small altercation between the two after the race.

After being replaced by Lance Stroll at the Silverstone-based squad for 2019, Ocon will return to racing again this year with Renault, competing on a two-year contract.