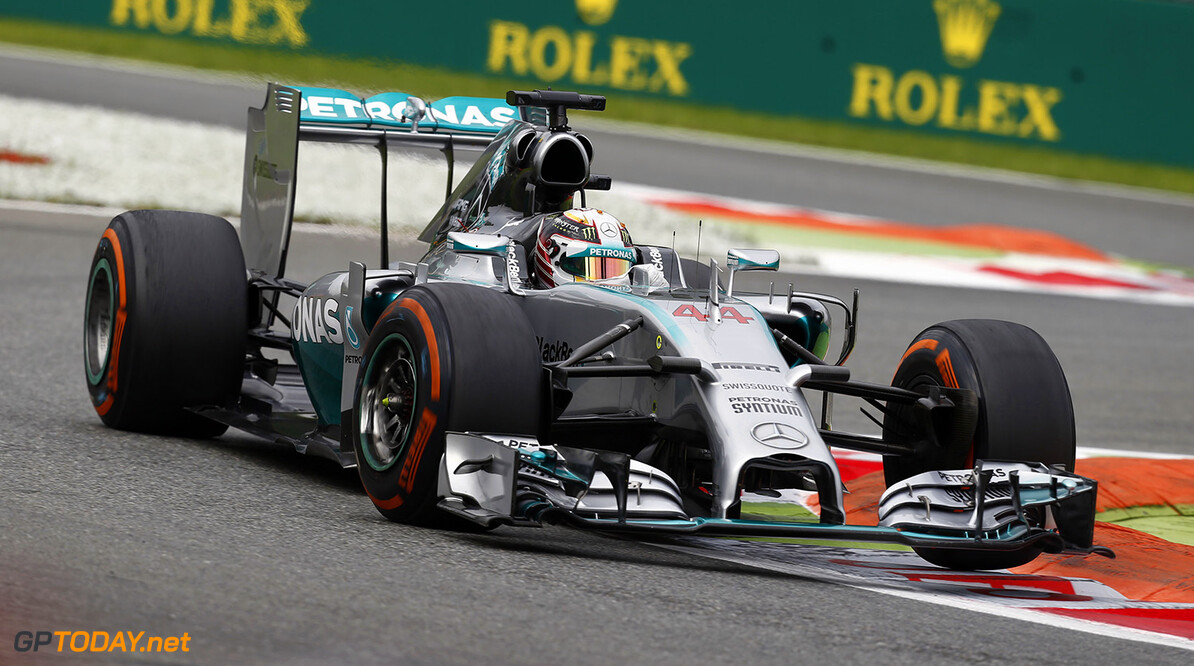 The weather was nothing short of perfect for the start of the Italian Grand Prix, with the two Mercedes locking out the front row and Hamilton spearheading the field, followed by the two Williams' of Bottas and Massa.

It was set to be a difficult race for Marcus Ericsson of Caterham as he would start from the pit-lane, as well as Kvyat who suffered a ten-place grid penalty and would start in 21st on the grid.

Pirelli were expectant of a one-stop strategy to be favoured thanks to low degradation from the Medium compound of tyres, so it would be a case of who could manage them best and therefore go longer into their stint, thus spending less time on their second set of tyres.

Roserbg got away from the start well, whilst Hamilton struggled and ended up 4th by Turn 1, with Magnussen following him in 2nd, Massa 3rd and Vettel was 5th. Alonso also got away poorly and got past Hulkenberg for 6th into Ascari.

The start of Lap 3 saw Massa beginning to harrass Magnussen for 3rd, whilst Hamilton, who was complaining of an ERS fault got ever closer to the pair. Rosberg meanwhile was storming away from the rest of the field and had a 1.5 second gap over the second-placed McLaren as they began the fourth lap.

The Magnussen/Massa battle began to intensify as the Brazilian Williams driver stormed past the Dane through the Curva Grande, with Hamilton following suit into the first Lesmo, meaning that the rookie lost two places in three corners, dropping him to 4th. Valtterri Bottas was also making progress by getting past Hulkenberg for 10th on Lap 6.

Lap 6 was good for some, but not for Max Chilton who got too deep into the second chicane, flew over the kerb and collided with the barrier, ending the reliable Britons race early.

Onwards to Lap 9 and Rosberg went straight on at the Rettifilio chicane, and lost 1.8 seconds of his lead over Massa and Hamilton meaning that the German would have to push to increase the gap. Meanwhile, Hamilton on the following lap got past Massa with a superb move up the outside into the first chicane, where Rosberg had struggled previously.

Lap 14 saw Bottas making further progress through the field and up into 8th place past Perez after slipstreaming the Mexican's Force India down the main straight. He ten passed Alonso's Ferrari for 7th with an almost identical move on Lap 16. The fast Finn then passed Button for 6th at the start of Lap 18, with the Williams driver overtaking more cars than anyone else at that point during the race.

Hamilton was just 1.1 seconds behind Rosberg on Lap 19, with the 2008 World Champion having decimated his German team-mates lead, with it being expected that his tyres were going off. The pit-window was well and truly in force by now with Vettel making the first move, although his approach speed to the pit-lane was questionable, he was then followed by Perez and surprisingly, Hulkenberg, who started on the more durable Prime tyre.

Bottas's ever impressive race continued as he sliced past Magnussen for 4th in his favourite overtaking spot, whilst Raikkonen pitted from 7th for Ferrari.

Rosberg finally pitted on Lap 24 and came out of the pit-lane in 2nd place, with a 2.8 second stop. Bottas followed and was overtaken but Vettel, Magnussen and Perez all got past into the first chicane, undoing the Finnish drivers hard work.

Hamilton pitted two laps after Rosberg and came out behind his team-mate once more, whilst Bottas then set about getting past those in front, quickly disposing of Perez for Force India. Meanwhile Ricciardo, who was up to 3rd having not pitted, finally came into the box on Lap 27 and re-joined the Grand Prix in 12th, with the Australian's somewhat miserable race continuing.

There was less than a second separating five drivers, from 5th down to 9th, with the running order being Vettel, Magnussen, Bottas, Perez and Button.

The start of Lap 29 saw Hamilton, who had rapidly decreased the gap to Rosberg, get past the German and take the lead out of Turn 1 after the Championship leader went deep into the corner for the second time during the race.

It was heartbreak for all of the Italian Ferrari supporters attending the race after Alonso retired at the first chicane following a suspected Power Unit failure. It would be the first time that the Spaniard had failed to finish on the podium since he joined the marque in 2010.

The earlier battle for 5th became the battle for 4th following Alonso's retirement, and the battle between Bottas and Magnussen hotted up at the Finnish Williams drivers' favourite passing place, as he tried to get past around the outside. His efforts seemed to be in vain though as Magnussen forced him wide after maintaining the racing line.

The duo continued to duel and eventually got past into the Rettifilio chicane at the start of Lap 37. Magnussen's defensive efforts came back to bite him as he received a 5 second stop/go penalty for forcing another driver (Bottas) off the track, scuppering the Danish rookies impressive race so far.

Three laps later saw Perez and Button going wheel-to-wheel for 7th place, with the two exchanging places through the second chicane, where the Mexican driver was forced wide and lined up a superb move through the two Lesmos. Button then lost another place to Ricciardo down the main-straight, and was 9th by the end of the lap.

The overtaker of the race, Bottas, got past Vettel for 4th, whilst Ricciardo drove up the inside of Perez through the second chicane of Lap 42, with the Australian being on far fresher tyres.

Button and Perez continued their epic duel with the Briton firstly making a move at the first chicane, before his former team-mate got back past with an almost identical move out of the second chicane after Button went in deep.

The action further back was far more active than that compared to the front, and this was confirmed with Ricciardo getting past Magnussen for 6th, with the Danish driver electing to have the penalty added to his total race time.

Further back, Kvyat, who had started the race in last place was up to 12th place by Lap 45 and was harassing Hulkenberg for 11th with his team-mate just under a second behind, he eventually got past two laps later. The two sister Red Bulls were also locked in a battle at the start of Lap 47 with Ricciardo succeeding to pass Vettel for 5th place.

As the race began the closing stages, it had been a good one for the Williams team with Massa maintaining 3rd position throughout, with Bottas storming through the field to 4th.

The penultimate lap saw Perez harassing Magnussen, the Force India's far fresher tyres proving to be beneficial in the latter part of the Grand Prix, with brake dust pouring from the front left of the VJM-07.

There were two major incidents towards the end, one between Gutierrez and Maldonado with the two making contact down the main-straight, resulting in a puncture and debris on-track, ruining the Mexicans disappointing race, perhaps a reflection on his season so far.

The other was for Daniil Kvyat who just avoided Kimi Raikkonen following brake failure on the second-to-last lap, he just limped round to finish the race.

But it was Hamilton who crossed the line to win the Italian Grand Prix, followed by Nico Rosberg and Felipe Massa for Williams. Bottas maintained 4th with Ricciardo claiming 5th, team-mate Vettel was 6th. The dice for 7th saw Magnussen just hold on to take the place, then it was Perez, Button and Raikkonen rounding out the final points position.

The race saw Bottas move up to 4th in the Constructors Championship, with Williams leapfrogging Ferrari at their home race. The gap between Rosberg and Hamilton was now down to 22 points, with six rounds remaining, and of course the double points finale at Abu Dhabi.

Next time out we are at Singapore in two weeks time, and F1Today.net's exclusive coverage will continue throughout the weekend.