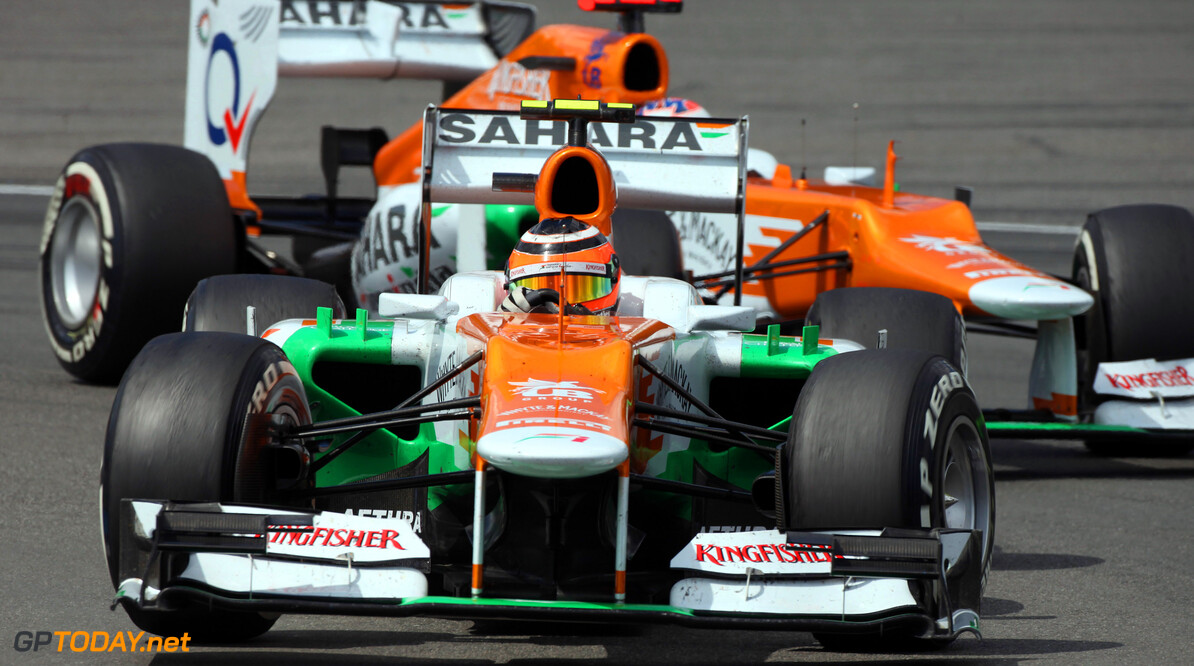 Dr Vijay Mallya (team principal), give us your verdict on the first half of the season?
Mallya: I've said many times already that this is the best start we have ever had to a season in terms of points scored. So from that perspective I'm satisfied and proud of what we have achieved in the first ten races. Our drivers are doing an excellent job and we are working well as a team so there are lots of reasons to be positive. But at the same time I'm all too aware that we have a big fight on our hands to reclaim our sixth position in the championship."

Do you think the German Grand Prix was representative of the teams competitiveness at the moment?
Mallya: "I think it's hard to judge too much from one race because this year weve seen most teams experiencing big variances in terms of performance based on circuit characteristics and their understanding of the tyres. In Germany it seemed that others were able to manage their tyres better than us because with Nico we were always debating whether to stop two or three times. With Paul, we couldn't manage consistent performance during each stint so its something we will try and understand before we get to Hungary."

How is the team approaching this weekend?
Mallya: "People suggest that Hungary might play more to our strengths, but regardless of whether it suits us we just need to be ahead of the teams that we are fighting with in the championship and score points. If you take our immediate competitors, Sauber have had three races without points so far, Williams have had four, and we've had three. Thats what we need to address: we need to be scoring at every race."

Paul Di Resta gets set for racing at the Hungaroring.
Paul, we're now at the halfway point of the season  how do you look back on the first ten races?
Di Resta: "As a team we have to be pleased with the start weve had to the year. Weve had some strong races and scored more points compared to the same time last year. We seem to have one of the more consistent cars in terms of performance and I think traditionally weve been a team that gets stronger as the year progresses. With ten races still to go there are a lot of points on offer and a long way to go in the championship."

What memories do you have from racing in Hungary in the past?
Di Resta: "I had a great race there last year when I finished seventh just before the summer break. It was the best way to end the first part of the season because there had been a few races up to that point where things hadnt gone our way. Getting the result in Hungary helped make up for some of the bad luck earlier in the season."

Sum up the challenge of racing at the Hungaroring?
Di Resta: "It's a short track, but its very demanding on you physically and mentally. I suppose it's like a street track in terms of the layout and all the corners seem to flow into each other so you need to find a good rhythm. Because of the tight nature of the lap, there has never been much overtaking, so it's always a good test of the effectiveness of the DRS."

Nico Hulkenberg looks ahead to the Hungarian Grand Prix.
Nico, let's look back on your home race and the first half of the year  have things gone as you expected?
Hulkenberg: "To be honest, I would have hoped for a few more points than I actually have. There were some races where I had some bad luck, which cost me points, especially in Australia where I had a collision on lap one and in Bahrain with a clutch issue at the start. But on the other hand, I am happy with the improvement in performance from both the car and myself. We are regular top ten runners and I hope that we will move a little further up the grid in the second half of the season."

Tell us about your memories of racing at the Hungaroring
Hulkenberg: "I have some very good memories, especially looking back to 2010 when I finished sixth, which at that time was the best result of my Formula One career. Also, in 2009 I won the GP2 race at the Hungaroring. So I'm looking forward to going back there, especially because I like the city of Budapest: it's just a nice place to visit."

How do you see your chances for this years race?
Hulkenberg: "I think we should be able to fight for points because we recently looked quite strong on circuits that dont have so many fast corners, such as Valencia. Although it's quite a slow circuit, it's very difficult to get a good lap time because you need to hook up all the corners perfectly, so it's quite challenging."
F1 News Williams Sauber
.