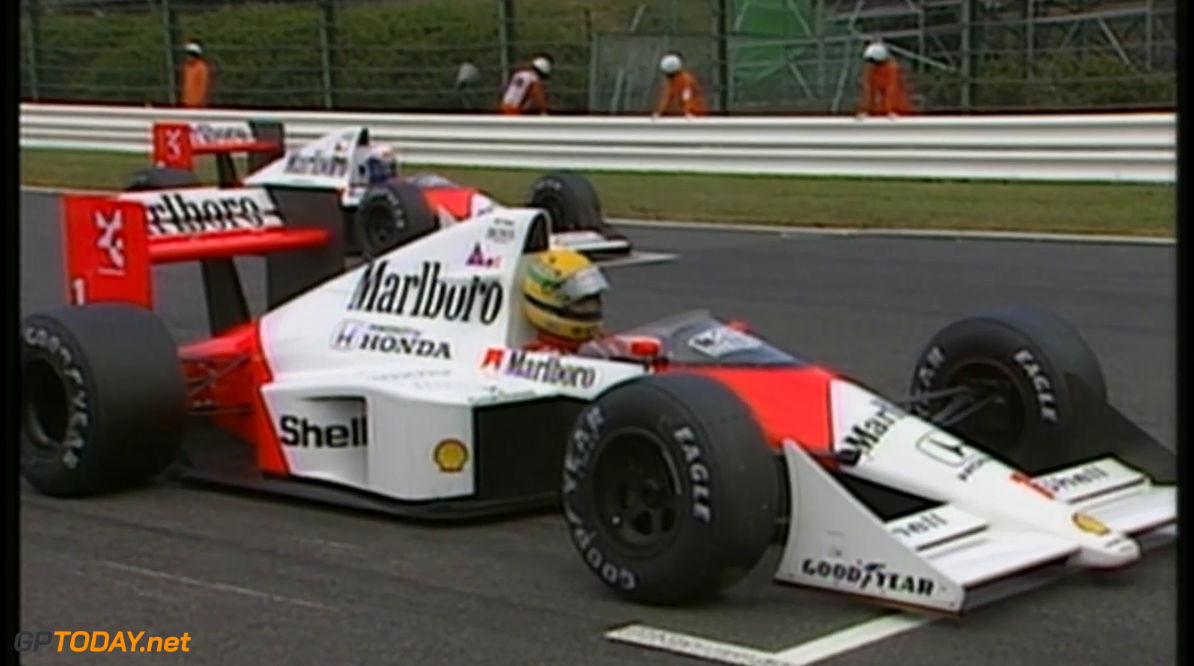 The Japanese Grand Prix had already been decisive for a championship several times. In 1976 James Hunt famously won the world title at the Fuji circuit. Over the years, Suzuka would crown even more world champions.

Prior to the race

Alain Prost told the French press that he would not open the door for Senna from the Japanese Grand Prix onwards. He stressed that he was in Japan to race and if Senna wanted to pass by he had to make an ambitious move. "I want to win the championship by winning the race, I have also told the team that I will not keep the door open, because I have done it too often", Prost explained.

McLaren was the dominant team in 1989. At the start of the weekend, Prost was 16 points ahead of Senna in the championship. The Brazilian won six races, Prost won four. A disadvantage for Ayrton was that he only scored on one other location, while Prost scored no points only once. Senna had to win in Suzuka and Adelaide to have a chance to win the world title. If Ayrton actually won both races he would be champion because Prost had to cancel his worst results.

"There is absolutely nothing human about him. He is not appreciated by anyone, except by our team for the risks he takes. He only lives for the competition. Everything else he has given up, even the human contact. Also, the way he will continue to compete will not be long. That's a pity because he's an exceptional driver", Prost explained on the eve of the Grand Prix.

Like all year round, both McLarens were the fastest. Yet there was one big difference between the two drivers. Senna had a fast car during qualifying and was therefore 1.730 seconds ahead of Prost on the grid. Prost had been busy with a race setup during the weekend. Prost knew in the back of his mind that both McLarens would be superior to the rest of the field, so he wasn't worried and had made his own plan prior to the race.

The Frenchman confided in a number of his mechanics and decided to remove the Gurney flap from the rear wing. This meant that he could generate more speed on the straight. Prost was busy tuning his car throughout Friday and Saturday. Berger's Ferrari and the returned Mansell were third and fourth on the grid, behind Senna by more than two seconds, not to mention the rest of the field. The Williams drivers were down by three seconds.

At the start Prost took off like a rocket and drove a 'Senna-like' first lap. After about ten laps the gap to Ayrton turned out to be about five seconds. The gap was only reduced from the moment that Prost came close to those who stayed behind. Ayrton was a bit faster than Prost, but the Brazilian was still not on the gearbox of his teammate. Both drivers decided to go halfway through the race for the pits for new tyres, Ayrton's stop was two seconds slower than Prost's, but as Prost was in traffic it didn't stand out in terms of track position at first.

However, Ayrton's stop turned out to be better for him rather than for Prost. The balance of Ayrton's car had improved to such an extent that he was able to make up for lost time lap by lap. From the back both drivers had no more pressure, as Gerhard Berger had dropped out and Nigel Mansell also had to put aside his Ferrari with engine problems. In the end, it would be a man-to-man fight to win the Grand Prix.

Ayrton came onto the gearbox of Prost at the start of the 40th lap. Prost had chosen to slow down a bit, which caused Ayrton to get closer in the corners, but on the straights, it was structurally slower because Prost drove a different setup. Prost and Senna then rode a tactical race in which it was clear that Senna was faster in the corners. On the 46th lap, Senna came out of the 130R corner faster and decided to put his car next to Prost's when approaching the Casio-chicane. Prost started braking a little earlier than usual, looked in his mirror and decided to block Senna's path.

Neither driver felt compelled to make concessions and both McLarens hit each other just before the apex of the corner. With the wheels hooked in and the engines stalled, it was clear to Prost that he couldn't go any further. The Frenchman immediately got out of his car and walked away. Senna, on the other hand, managed to get going with the help of the Japanese marshals. Ayrton was pushed and his car was restarted, so he could ride on the escape road on the track again.

Although Ayrton got his car started and drove it back on the track, the car was damaged. The nose had broken during the collision and Ayrton was sitting for half a lap with a loose hanging front wing. He managed to break it in Degner 2 over the kerbs. After this he continued his way to the pits. The nose was replaced and Nannini drove by. Upon returning to the track Ayrton had a gap of about five seconds to close on the Italian. With two laps to go Ayrton passed the Benetton driver at exactly the same spot where he came into contact with Prost ten minutes earlier. Three laps later Ayrton went first under the black and white-chequered flag. He won the Grand Prix of Japan and was only one victory away from extending his title.

Immediately after the race Ayrton was disqualified by the race stewards for cutting the chicane due to his collision with Prost. Senna was of the opinion that the decision was taken by FISA President Jean-Marie Balestre to give the championship to Prost. Nannini was declared the winner, Patrese and Boutsen were second and third for Williams. In the end, it would be the only victory for Nannini, he finished his Formula 1 career after a helicopter crash in which he lost his arm.

Ayrton and McLaren appealed because he said he didn't benefit from cutting the chicane. Ron Dennis explained that this profession had nothing to do with the switch from Prost to Ferrari. Dennis was of the opinion that the team had unjustly lost a victory and this had consequences for the loss of prize money and bonuses from sponsors.

"It is our duty as a team to win every race we can. If there is a possibility to do this while there is still a possibility to do it, we will always assume it. We are introducing this protest and would like to stress that there is absolutely no preferential treatment against any of our drivers. If Alain becomes champion today we are very happy for him, if Ayrton eventually becomes champion we are also happy for him. In this case, we are only protesting against the result of the race", said Creighton Brown, director of McLaren.

"It was the only place I could pass him. He should never have been there because he deliberately sent his car into me", Ayrton said in an interview with Folha de Sao Paulo.

According to article 56 of the Formula 1 Code of Discipline, a car can get stuck on the track and then be removed by the marshals. If the driver is able to get the car going, he may return to the race. The illegality in this case is the fact that Senna "cut off" the chicane. After the crash Senna's car didn't come back to the point of the track where it should be.

At the FISA hearing in Paris later in the same week, Senna's disqualification was not only maintained, but an additional fine of $100,000 was also given. The Brazilian was also suspended for six months for reckless driving. The FISA called Senna a 'dangerous driver'. In the end, only the fine remained. Prost became world champion.

Ayrton just took part in the rain race in Adelaide, he thought that if a race was won and the FIA's certificate was positive, he could become world champion. In the end, he would drop out on the 13th lap after a collision and he saw his friend Thierry Boutsen win the race.