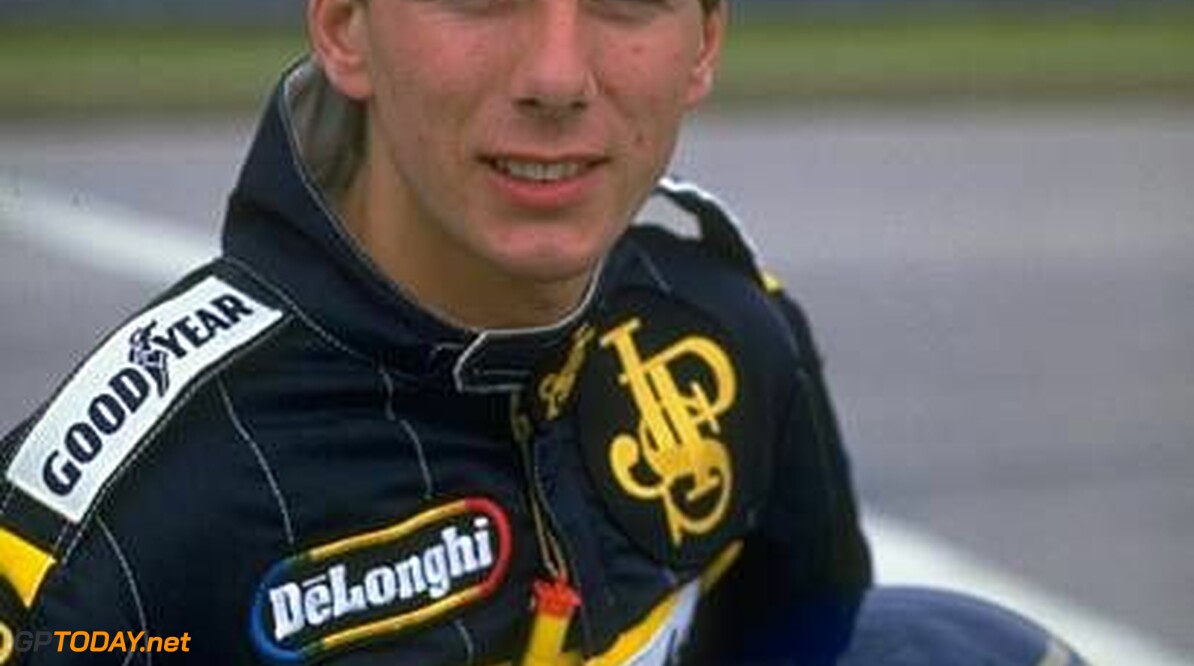 Johnny Dumfries was Ayrton's teammate at Lotus in 1986. In our report "Veto 1" we explained why Derek Warwick didn't get the second seat next to Ayrton. Johnny Dumfries eventually became the second driver as it was the best solution for Ayrton.

Dumfries was born on April 26th, 1958 in Rothesay, Argyl and Bute, Scotland. Dumfries is of nobility and had a rich family. He quit his expensive education at Ampleforth College and wanted to go for a career in motor racing. In 1984 he competed for the British Formula 3 title against Allen Berg. He won fourteen races during that season for Dave Price Racing. He also finished second in the European Formula 3 Championship that year. Dumfries was faster than Gerhard Berger and was six points short of the title, despite the fact that he had to miss out on the races at Magny-Cours (old circuit), Osterreichring and Enna-Pergusa.

Together with Martin Brundle, the young Scotsman turned out to be the new hope for British motorsport. Reviews were positive and the stature of Dumfries played a large part in the stories for the British press. But his sequel in the first official Formula 3000 season was hopeless. Despite the fact that Dumfries had access to top equipment, the March 85B with Cosworth engine, the Scotsman could not reap the rewards.

A sixth place in the Formula 3000 race in Vallelunga was his best result for Onyx Motorsport. This was in stark contrast to the results of teammate Emanuele Pirro, who won two of the first four races. Dumfries was finally replaced by Swiss Mario Hytten after four races. Eventually, Dumfries found refuge with Lola Motorsport for two races. Even with his new team the results were too poor and he wouldn't get any further than two starts.

There was big surprise when Dumfries signed a contract for Lotus-Renault in Formula 1 at the beginning of 1986. Dumfries, who was 28 years old at the time of his debut, had already gained experience in a Formula 1 car during 1985 as a test driver for Ferrari. In 1984 he was allowed to test for Lotus at Donington as a prize for his victory in the British Formula 3 Championship. The Scotsman got on well with the Lotus 95T and his performance was appreciated. In 1985 Dumfries tested for other teams: Brabham, McLaren, again Lotus and Williams. In the end he continued as a test driver for Ferrari.

In 1986 Johnny had a hopeful debut for Lotus in Brazil. He qualified in 11th place. However, due to strategic mistakes, he didn't get past ninth. In the course of the season the breakaways followed one after the other. Dumfries could not even qualify for the Monaco Grand Prix and was invariably three to four seconds slower than Senna. A fifth place in Hungary and a sixth place in Australia were his only achievements.

After his failed Formula 1 adventure he won the 24 Hours of Le Mans in 1988 with Jan Lammers and Andy Wallace for Jaguar. Dumfries remained active in motorsport until 1991 and would drive Le Mans three more times. As a factory driver for Toyota, he dropped out at an early stage in 1989 and 1990. In 1991 he drove for Courage Compétition with the Swedes Anders Olofsson and Thomas Danielsson, after 45 laps the car broke down.

Nowadays Dumfries lives with his family in London and they have the family house on Ilse of Bute at their disposal. The Scotsman's capital was estimated at £125m in 2008 in the Sunday Times Rich List 2008.