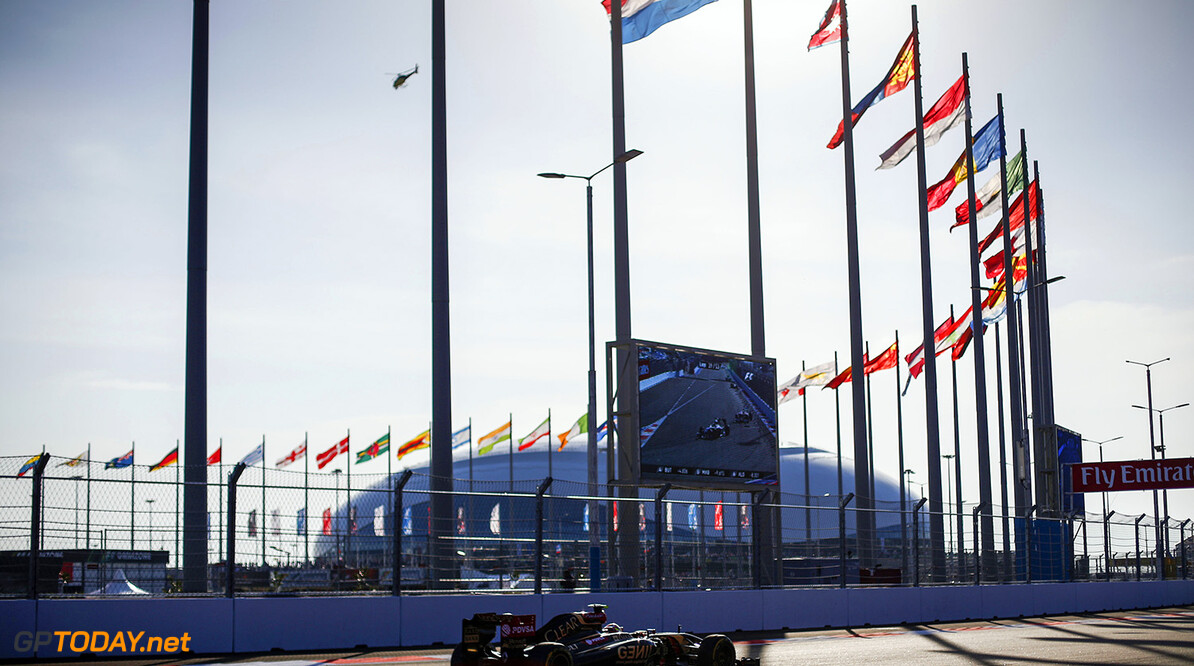 1pm GMT, we saw Fernando Alonso (McLaren), Romain Grosjean (Lotus), Danill Kvyat (Red Bull), Felipe Massa (Williams), Nico Rosberg (Mercedes), Carlos Sainz (Toro Rosso) interview by the world's Media. Other than Massa and Rosberg, the lineup consisted of drivers who are not usually good when in the firing range of the Press, in particular, Fernando Alonso and Daniil Kvyat. Who obviously have had a lot to contend with over the last few months and the stresses of Formula One was clearly evident through their body language and answers.

Fernando Alonso was at center stage (Literally) as he celebrates his 250th Race this weekend. Expectantly, he was asked about his career to where he felt his future lied. Recently growing speculation indicates that he might leave the Mclaren/Honda Project, prematurely, and Daniel Johnson from the Telegraph questioned him on the matter.

Alonso attempted to evade answering the question outright, by saying his response was within his own Twitter Page. To which the reporter responded "It was in Spanish" meaning that there was no clarity on the issue, and he wanted to hear it from the horses mouth. Eventually, Alonso gave a reluctant answer of "Yes", but the journalist was not finished with him yet. He asked if he was "100%" and Double-World Champion begrudgingly stated "And 17"  Continuing his evasive attitude towards Johnson's interrogation.

Say what you want about Alonso, but when Spaniard sees a project that he firmly believes in, he will give it a chance to flourish. He gave Ferrari five years to get it right - to which they almost did - and no doubt, he will give Mclaren three years.

Questioning moved onto the radio outburst from Japan, a rather embarrassed Spaniard shifted around as he reaffirmed that he wanted radio messages between Pitwall and Drivers to remain private. Alonso was then reminded that he should have known that most messages are broadcast live on telly and an element of cynicism crept into the questioning. But his response was sufficient, telling the journalists that not all messages are transmitted, and he and even Jenson Button had lost their temperament over the current situation much earlier in the season. Only for the FIA to intervene in having the remark banned from being made public. Alonso justified he's recent outbursts as a hallmark of his commitment to the project, and it was not a sign of him wanting to leave.

"It’s the frustration of battling hard and being a competitive sportsman. When you are in a car, in a race and you try to give it all and you are fighting lap after lap and you keep losing positions easily on the straight, even before the braking point, you get some frustration out there on the radio. I’m happy it was only broadcast in Suzuka because if you hear all the races, all the radio messages from me or from Jenson or whatever, you will be even more surprised."

One of the surprise packages this year has been the progression of young Danill Kvyat and at his home Grand Prix he has had no reassurance whether his team Red Bull will be here for next year. Kvyat unconvincingly pointed his finger at the media, claiming that some of the stories have not helped the situation at all.  The impression he gave in that answer, suggests that he is none no wiser of what is happening - which I think is what most would do at such an early stage of their career. Carlos Sainz was also asked the same question, to which mimicked Kvyat's answer.

"I think there have been some rumours in the media and stuff like that. Obviously not the nicest things to hear about your own team."

The conference also saw the appearance of Romain Grosjean, who was recently announced as Haas' Lead Driver for next year. The Frenchman has now been with Lotus/Renault for 10 years - a statistic that surprised even me. Thus, his feedback about his new venture was kept modest, admitting that it was quite a sad occasion to leave Enstone for the US which is where they will be their base for the forthcoming season. However, Grosjean is confident that the unique direction which Haas appears to be taking, made the offer too good to turn down. There was no mention of the implicit route to a Ferrari Seat.

"Hopefully pretty successful! It was a great opportunity I had to join Haas. As I’ve said, leaving Enstone is going to be, from an emotional point of view, quite hard because I’ve spent ten years there. I think Fernando knows how it is in this team: very, very strong group of people. On the other hand, from a sporting point of view, I think the way Haas is coming to Formula One is very, very clever"

The FW37 has now come to an end of its development cycle and at this weekend they will implement their last update to the car. Williams are set to finish 3rd in the Championship and they are looking fairly safe there, 129 Points away from Second Place Ferrari and 69 Points away from 4th Place Red Bull. Providing that Matechitz's Team do not start earning podiums in the remaining five races, this could well be a good move from Oxfordshire Based Team. Considering their budget when compared to the 'Big Teams' they have no other option but to take risks in order competitive.

"We had some new parts of the car in the last races. Even this race we have some little bits but I think we are already thinking about next year since a little bit of time. We understand it’s very important to finish at least where we are in the Constructors’ Championship but we really understand that next year is really, really important and, as soon as you start, the better it is, so definitely we’re really concentrating on next year."

Carlos Sainz is sure that Toro Rosso can overtake Lotus in the standings, but for him to rise-up to the challenge, he will need a clean weekend. Two weeks ago at Suzuka he went from topping a Wet Practice Session to a disastrous Qualifying. Then a Race that saw him make an uncharacteristic error, which led to a 10+ second pitstop for a Front Wing Change.

"It’s been a difficult weekend in Suzuka with a lot of positives to take - but the P10 I think didn’t show the good weekend that we had done until then. Obviously we had this problem in qualifying and then I did the mistake in the race after doing some good free practices in the wet. So, we just need a clean weekend without any mistake from my side, without any reliability problems on the team side and I’m sure we can put a very good result together because we saw that the performance is really there."

The First Practice Session for Russia begins tomorrow at 8am, GMT.