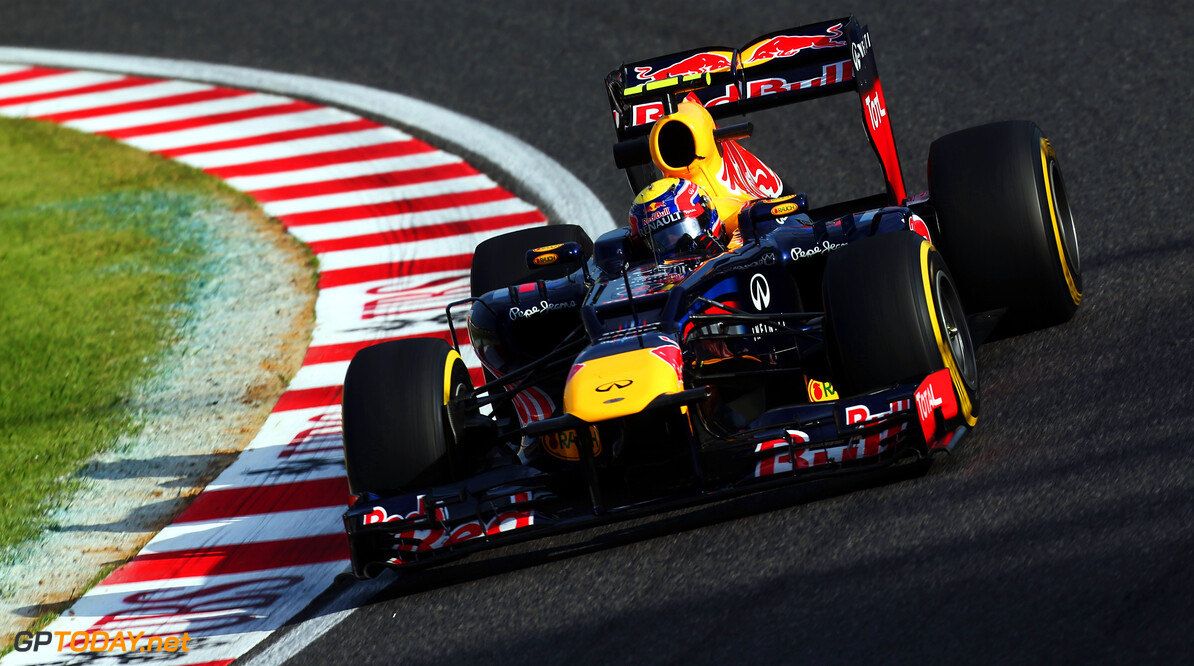 While practice times had Sebastian Vettel favourite to take pole position in Korea, it was team-mate Mark Webber who finished qualifying in P1. It's a great place to start the race from. Red Bull Racing's Webber won the Monaco GP earlier this year after inheriting pole position when quickest man Michael Schumacher was. However, at the Korea International Circuit, pole position was all Webber's own work.

"It was a tight session for all of us", he said after beating his team-mate by just seven hundredths of a second. "I think as the session unfolded, people were having different balance issues on different tyre compounds. I was happy with my lap there, it was solid and its good to get pole. It's a great place to start the race from. I'm looking to get off the first corner very well, that's important as there are two long straights after that."

The Red Bulls looked like being the only cars in the hunt for pole position. Having dominated practice, the carried the form into qualifying, going immediately to the top of the timesheet in Q1 when they emerged from the pits. Vettel was the quicker by two tenths, and given his form in practice was a strong favourite for pole.

Elsewhere, championship leader Fernando Alonso had a difficult opening session and the Ferrari driver needed to put on the supersoft tyres to ensure progress to the second session. Even then he could only manage 16th place. That was one place better than Lewis Hamilton. Hamilton opted to stay in the garage during the final stages of the session. As fastest times came in his name dropped down the leaderboard until he was perilously close to the drop zone. He was teetering on the brink of elimination when Bruno Senna abandoned his last lap and ensured Hamilton progressed. "It was quite a shocking session for me: didn't get a lap, did quite a poor job I'm very lucky that I got through", said Hamilton afterwards.

Further back, the drop zone shaped up as expected with the Caterhams, Marussia and HRTs all being eliminated. HRT's Narain Karthikeyan endured a big spin at Turn 3 that sidelined him from the rest of the session. The problem was later reported to have been caused by a broken brake disc.

The second segment largely followed the pattern of the first, at least for Vettel. Fernando Alonso set the pace on his first run with a lap of 1:38.987 but the German beat by just over two-tenths. His team then opted to keep the World Champion in the garage for the remainder of the session, his time being good enough for him to remain top. The big casualty of the second session was McLaren's Jenson Button. The Briton needed a good final run to ensure hed be around to fight for pole but at the tail end of Q2 Toro Rossos Daniel Ricciardo stopped out on track with a gearbox problem. As the yellow flags came out, a number of drivers were forced to back off, including Button. He finished in 11th place, ahead of Sergio Pérez, Kamui Kobayashi, Paul Di Resta, Pastor Maldonado, Ricciardo and Jean-Eric Vergne.

After dominating the opening two segments, the final 10 minutes should have been all about Vettels march to a 35th career pole. Webber, though, had other ideas.

After the duo's first runs, Vettel had the upper hand, putting in a time of 1:37.316. Webber, meanwhile, could do no better than fourth. In the final runs however, it was the Australian who found the extra injection of pace. Vettel, though, was still lapping but the German's first sector was poor as he was forced to back off when he encountered the much slower Felipe Massa shortly before the start of his lap. Mistakes in the second sector then compounded the damage.

"Overall we can be very happy with the result", said Vettel. "We were quite quick in the first and second qualifying sessions and had a good start to Q3. On the last run, I had to back off starting the lap as Massa was there, it wasn't his fault, but I had to back off. Nevertheless, the second lap in Q3 wasn't good enough. I lost time in the middle sector, which seemed to be okay all weekend, but when the circuit ramped up I wasn't able to go with it, so I lost a bit."