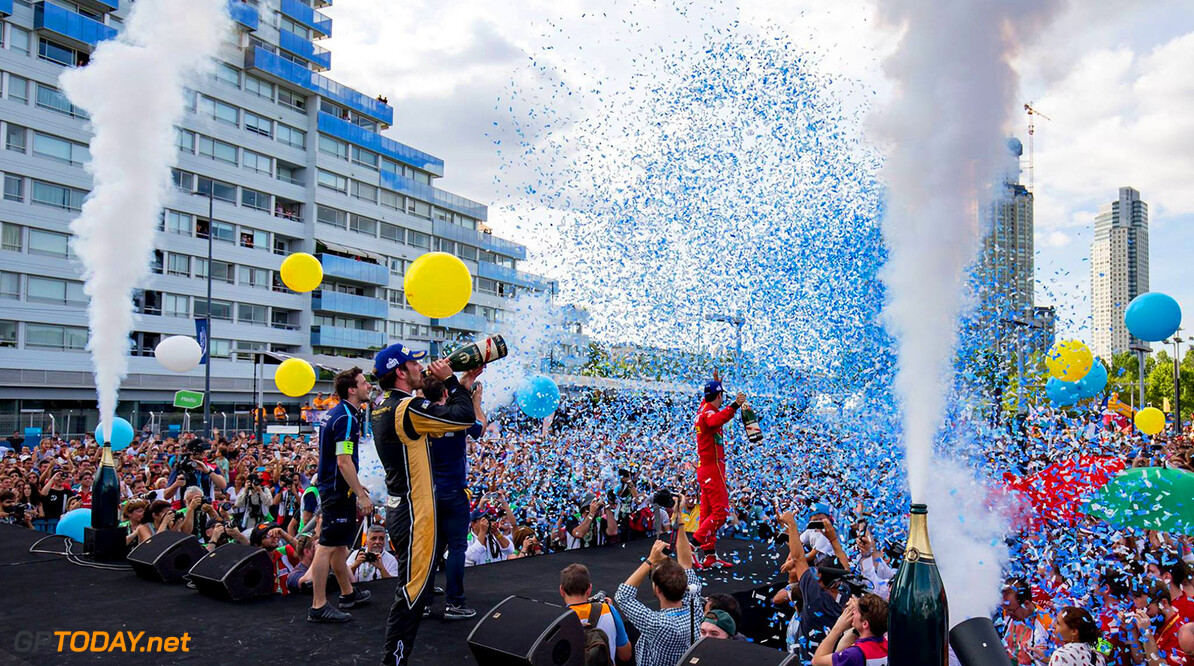 Buemi holds off di Grassi to win the Monaco ePrix

Sebastien Buemi claimed victory around the streets of Monaco for the second time in his Formula E career on Saturday afternoon, resisting close pressure from Lucas di Grassi to convert pole into the top step of the podium.

The Swiss driver kept his advantage as the lights went out, leading di Grassi and the NEXTEV of Nelson Piquet Jr into the first corner. Passing was scarce for much of the race, such is the difficulty in overtaking at Monte Carlo, and this meant that Buemi already had a one-second lead by lap 2 and the fastest lap by the fourth tour.

Behind them, the first major event of the race occurred on lap 7, when the DS Virgin car of Sam Bird clouted the barrier at La Rascasse, damaging his rear suspension and confining him to the pits for several laps. He had been defending seventh at this point, but the best he could now hope for was a fastest lap.

Lopez joined him soon afterwards with a damaged nose and rear wing, placing both cars at the back of the field and many laps adrift. Lap 13 saw the first serious challenge in terms of overtaking, as Mahindra's Felix Rosenqvist pressured Maro Engel's Venturi for sixth, and Daniel Abt passed Robin Frijns for eighth behind them. This allowed Abt to close on Rosenqvist and Engel, making the battle for sixth a three-way affair.

Towards the front, Tahcheetah's Jean-Eric Vergne was attempting to muscle past Piquet to get third, but this would end in disaster on lap 21 when Vergne, who had found a space on the outside of Piquet at the hairpin, ran out of road and connected with his rival. He was in the barrier and out of the race, whilst Piquet scampered away with a damaged car.

The Safety Car was duly deployed, and the field began to make pit stops. Buemi and di Grassi retained the top two spots, with Nick Heidfeld now up to third and Piquet in fourth despite his tangle with Vergne. These positions were unchanged at the restart on lap 26, as was much of the pack.

On lap 29, Jerome D'Ambrosio's Dragon car stopped at the Swimming Pool, and although he performed a reset and got going again, he peeled off into the pits and found himself disadvantaged like his Virgin rivals.

Bird set the fastest lap on lap 33, but was back for a prolonged spell in his pit box ten laps later, as was Lopez. Stephane Sarrazin and Loic Duval had also pitted with their own problems, and whilst they were able to re-emerge, their races were effectively over.

At the front, di Grassi was edging ever closer to Buemi, and had Fanboost left to use as the 51-lap race reached its end. He was right on the tail of the Renault e.dams with a handful of laps to go, but could not find a way past Buemi, and his Fanboost was bizarrely left unused.

Buemi therefore hung on to win ahead of the Brazilian and a lonely Heidfeld in third - the German was delighted with his result, having started eighth. Piquet was fourth, with Engel fifth and Rosenqvist sixth. Abt took seventh ahead of Esteban Gutierrez, although the Mexican will be subject to investigation following an unsafe release from the pits. Antonio Felix da Costa was ninth for Andretti, with Buemi's team-mate Nico Prost rounding out the top ten.

Mitch Evans was eleventh for Jaguar, with Frijns twelfth and NEXTEV's Oliver Turvey thirteenth as the last car on the lead lap. Evans' team-mate Carroll ended in fourteenth, just ahead of Sarrazin, the final classified finisher. The six unclassified drivers were Lopez, D'Ambrosio, Duval, Bird and Vergne, although Duval did cross the line 11 laps behind the winner.