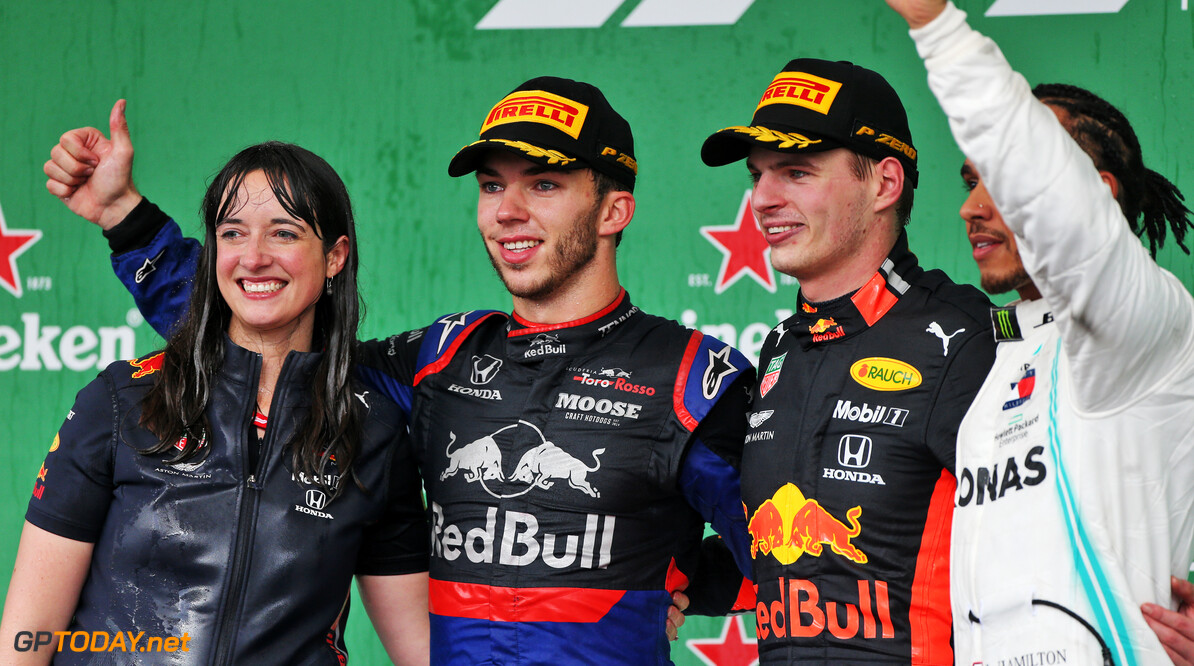 Despite making a big mistake in his first Q3 lap, Verstappen had enough to take pole position in Sao Paulo, and secured it with an even faster lap second time around. In the race, the Dutchman didn't take a simple lights-to -lag finish. Having been made work for the win, Verstappen took the chequered flag - and his third win of the season.

Gasly has been building momentum ever since he was bumped back down to Toro Rosso midway through the year. Achieving a result like this will be a major boost to his confidence heading into 2020, as he looks to prove Dr Helmut Marko and Christian Horner wrong.

If it was possible to rate him higher, we would! While we often cheer and praise a back of the grid recovery for top team drivers, for Sainz to gain his first podium after starting from P20 is nothing less than sensational. Sainz has been driving beautifully all year long - and McLaren was rewarded for its 2019 efforts with its first podium in over five years.

Raikkonen kept himself out of trouble in Brazil and managed to take home Alfa Romeo's best result of the season. In fact, it is the highest result the team has had in the turbo-hybrid era, as the previous best result for the Hinwil-based squad was P5 in 2015, with Felipe Nasr behind the wheel.

Now signed up for 2020, Giovinazzi impressed with his P5 result in Sao Paulo, although in qualifying he couldn't seem to keep up with Raikkonen. Nonetheless, a strong finish for the Italian saw him take his fourth top-ten result of the year.

It could have been a spectacular result for Ricciardo, however contact with Magnussen put a dent in his race. You could fairly argue that his recovery to P6 after his early stop made for a strong drive, taking his second sixth-place result in a row.

Hamilton showed a rare lapse of judgement on Sunday when he collided with Alexander Albon, denying the Red Bull driver his first podium finish. Up to that point, it was a strong race from Hamilton, who kept himself in contention for the race win throughout much of the grand prix.

Norris was a little too hard on himself after the race, saying that he was "too slow". However, in his rookie year, consistent performances make a very strong impression. More points for him and for McLaren, all the while after enduring a difficult stint on the hard tyres.

Racing Point simply didn't have the pace in Brazil, so a top-ten finish for the Silverstone squad was a strong achievement. The Mexican has been driving consistently - so much so, that Singapore remains the only race in the second half of the season in which he has failed to score points.

Kvyat was lacking pace compared to Gasly all weekend, dropping out in Q1 while the Frenchman secured the 'best of the rest' pole position. However obtaining a point for Toro Rosso could prove vital as it hunts down Renault for sixth in the championship.

Magnussen did well to qualify in the top ten given the pace that Haas have had, or rather not had, in recent races. The Dane was unlucky to be hit by Ricciardo in the race and would have quite possibly scored points if there had not have been contact.

Russell has been performing well consistently throughout the year, and this weekend was no different. The British rookie yet again out-qualified his teammate Robert Kubica and then finished a lap ahead of the Pole in the race.

Grosjean was having a very good weekend in Brazil up until a mechanical issue meant that he lost all of the pace he had in the race. After out-qualifying Magnussen to start from P8, the Frenchman was looking good for P5 in the race up until the unfortunate issue ended his chances of a first points finish since Germany.

Albon may still be lacking on outright pace over one lap in qualifying compared to Verstappen, but he certainly makes up for this in the race. The Anglo-Thai rookie has shown great race craft all year, and this weekend was no different. He pulled off what could be the overtake of the year against Vettel on his way to what should have been his maiden podium finish.

In what could be his penultimate race in the sport, Hulkenberg had a weekend to forget at the Autódromo José Carlos Pace. He was at a loss to try and explain his lack of progress in the race in comparison to the great recovery drive from his teammate Daniel Ricciardo.

Kubica did not have a terrible weekend, but his crash in FP1 surely put the Pole slightly on the back foot. He was slightly closer than normal to Russell in qualifying, and then battled well with the Brit in the first half of the race. However, he made four pitstops in total and unfortunately finished up a lap down on the field.

In comparison to his teammate, Stroll did not have a terrible weekend in Interlagos. The Canadian was only 0.2s slower than Perez in qualifying, and then was running inside the points until the final few laps of the race when he picked up some debris from the Ferrari's. He was forced to retire, ending his race just before the chequered flag.

Up until he made contact with his teammate, Vettel had driven a very smooth race and looked set for a decent haul of points after out-qualifying teammate Charles Leclerc. Although being declared a racing incident, for me it is clear to see that Vettel was at fault for the incident with Leclerc. For what was very minor contact, it somehow managed to cause an awful lot of damage and surely will not be allowed to happen again.

Leclerc was off the pace of Vettel in qualifying, and was only brought back into contention in the race due to the safety car when Valtteri Bottas retired. Unfortunately for the Monégasque driver it did not end the way he had planned, and you can assume there will be strong words in the next team meeting.

Bottas was off the pace of Hamilton all weekend, and could not challenge for the podium places, nevermind the win. He was unlucky to retire with an engine issue, but if the Finn wants to challenge Hamilton for the title next season he can't afford to have many weekends like this.