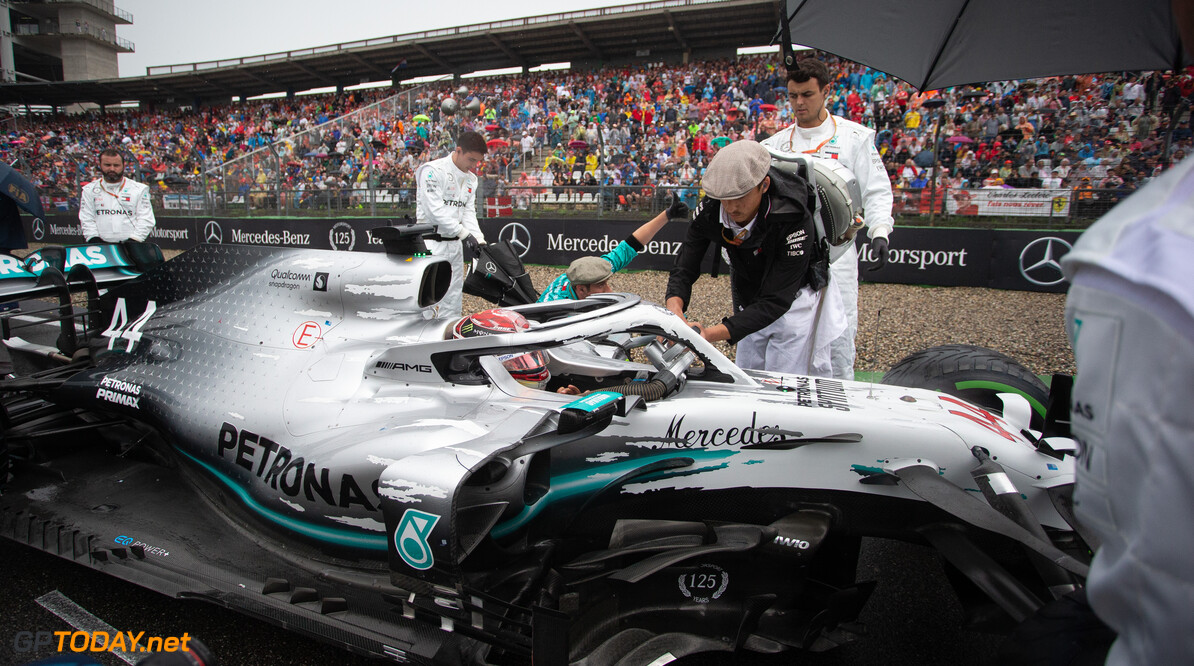 Mercedes has explained why Lewis Hamilton's pit stop at the German Grand Prix was so chaotic, resulting in a large loss of time.

The Briton came straight into the pits after sliding wide at Turn 16, breaking his front wing while running on dry tyres.

Hamilton had only been in on the previous lap to switch to the dry tyres under the safety car, before he arrived in again to be serviced for new tyres and a new front wing.

However, Mercedes has stated that it was originally expecting Hamilton's teammate Valtteri Bottas to arrive in the pit lane, but the Finn decided to stay out, which caused confusion in the little time it took for Hamilton to recover from his off at Turn 16 and enter the pits

"There was a lot of chaos when Lewis came in, but we were in the pits ready for Valtteri," said Mercedes trackside engineering director Andrew Shovelin on the Pure Pit Wall debrief.

"He decided to stay out. At the same time, Lewis had gone off track, hit the wall, broke the front wing. He came in.

"We could see that he was coming in, but it takes the guys a little while to get the different tyres out. But, also, we had this broken nose and we can’t lift the car on that to do the normal change with the jack. So, we had to get different kit out to do that."

Despite the difficult pit stop for Mercedes, Shovelin says the pit crew did an impressive job to service Hamilton amid all the confusion and challenges.

"It looked messy. There was a change of driver on the tyre call, we also changed the tyre spec from a soft to an intermediate tyre and getting the communication through to the guys when everything is so chaotic is very difficult," Shovelin said.

"We are aware it wasn’t pretty, the guys in the pits actually did a really good job reacting to that, we at least got the right tyres on the right car.

"But those situations are very difficult, and they are not rehearsed, they are not the ones we practice. But it does show us where we need to be stronger in the future."