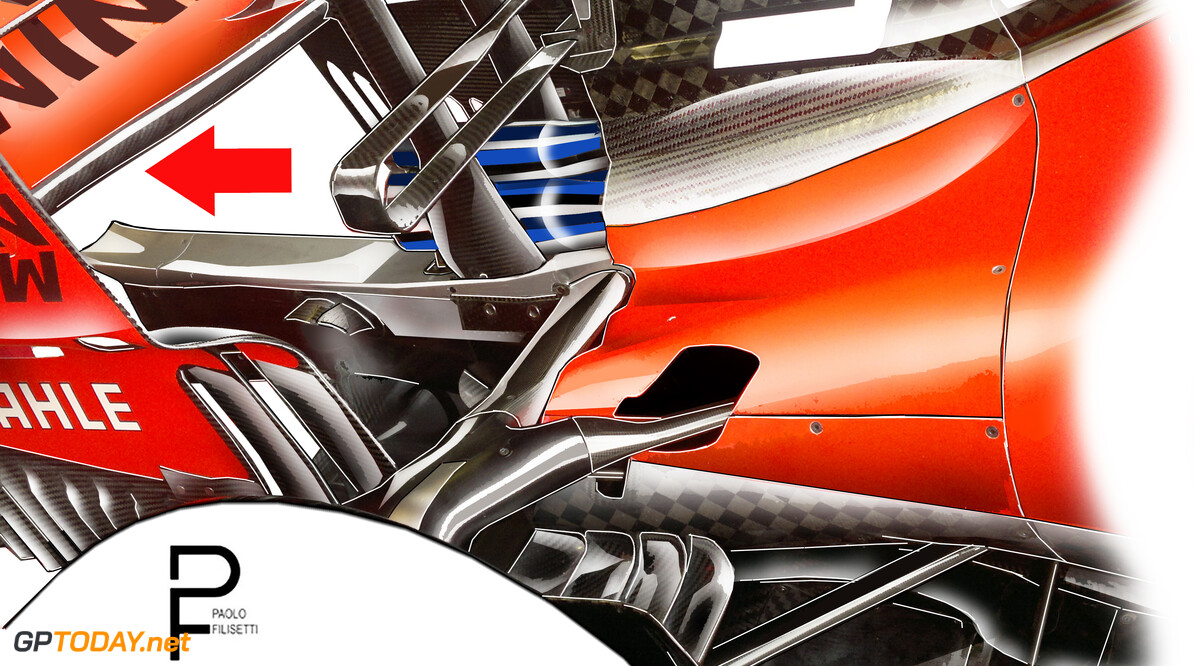 Technical Analysis: Even without developments, Ferrari responds in Canada

The Gilles Villeneuve circuit is characterized by a very particular track layout - defined as ‘stop and go’, meaning it is filled with acceleration and braking zones but without long fast bends. At the track there is the fastest section, made up by the long straight that runs along the rowing basin, before the chicane that leads to the finish line.

These characteristics make this track difficult to interpret, as it is needed to find the right set up and the optimal mode with adjustments. Either you make sure the car is tuned for the fast sector using the engine power, or rely on agility and traction in the twisty section. This was evident this year when comparing the performance and choices of Ferrari and Mercedes respectively.

In practice, the peculiarities made the circuit more suitable for the SF90. The power output was more important for performance than the aerodynamics. It is a circuit where the engine, especially in terms of acceleration, is the most important in the whole season (that's why Mercedes brought its evolution of the engine here). This made it possible to highlight the qualities of the Ferrari engine, as well as the better aerodynamic efficiency of the SF90 compared to the Mercedes W10.

Ferrari benefits from the character of the SF90

The Italian team didn't bring any new parts to Montreal, because the car was better suited to the circuit. It makes more sense to bring them to circuits where the qualities of the SF90 are less obvious, such as Paul Ricard in two weeks' time. The evolution of the new power unit was completed in Canada. After the new combustion engine in Spain, the second turbo, MGU-H and MGU-K came to Montreal. Thanks to the new components, the potential of the new combustion engine seemed much greater.

Also relevant, and perhaps decisive, seems to be the role of the mappings, marked by the power supply, which is very important when exiting the bends. The use of the setting with more downforce has also helped. During free practice both the Baku version and the standard flat profile were tested. The choice was quickly made for the latter, which produces more pressure at the expense of a little more air resistance.

Not unimportant are the brakes, which are subject to a lot of mechanical and thermal stress in Canada due to the high temperatures they reach. During the first two practice sessions, the drivers made a comparison of the front brake drums. The one with double vertical grooves for efficient heat dissipation was chosen.

It is interesting to note that one of the main aims of the comparison was to evaluate which of the two solutions quickly reached the operational temperatures of the tyre. This is an important factor in Canada as the asphalt has little abrasive, meaning warming up the tyres (and reaching the tyre window) is more complex.

There were few significant changes for the teams, with the exception of Racing Point. They introduced a new nose with a profile under the front wing. Having said that, it was interesting to see that Red Bull kept the nose it introduced in Monaco, without opening for the S-duct (as we predicted in the previous analysis).

In addition, fins appeared during the second free practice session at the opening of the S-duct, reminiscent of the similar elements Alfa Romeo has been using since the beginning of the season. The function of these fins is to generate downwash, i.e. the deflection of air currents from the front wing. The quantity and quality of the air towards the sidepods is improved. This also seems to give an advantage in terms of reducing the turbulence generated by the non-directional air currents at the halo. 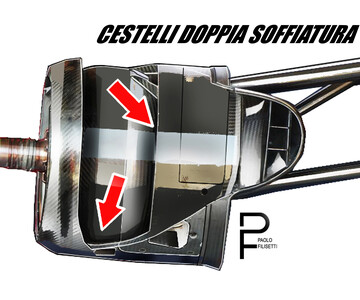 Ferrari made a direct comparison between more closed brake drums with drop-shaped ventilation and the more open version. In the latte, the slots are evident, which allow better heat dissipation, but also accelerate the heating of the tyres. That is crucial on the Montreal circuit. 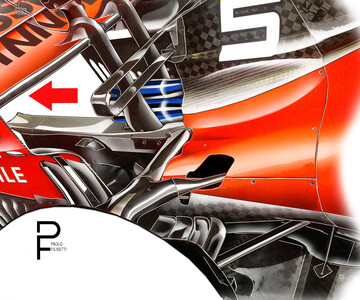 The version of the rear wing introduced in Baku was only tried for a short time during the first free practice session. It was characterized by a light spoon-shaped profile to reduce drag. Preference was given to the flat profile version, which generates more pressure and slightly more air resistance. 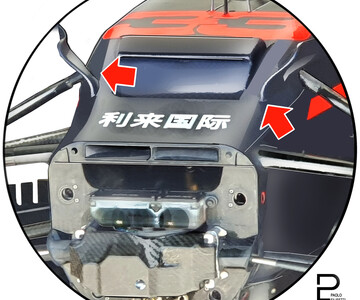 Red Bull: Ears next to the S-duct

The appearance of the small, curved profiles, reminiscent of those introduced at Alfa Romeo at the beginning of the year (see drawing), is interesting. The function is to deflect the airflow from the front wing downwards. In this way, the quality of the airflow to the sidepods is improved and the turbulence generated by the halo is reduced. 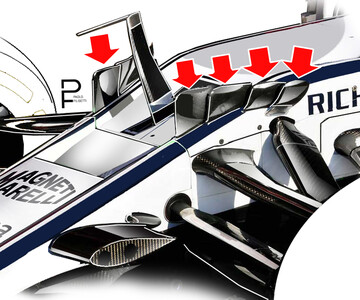