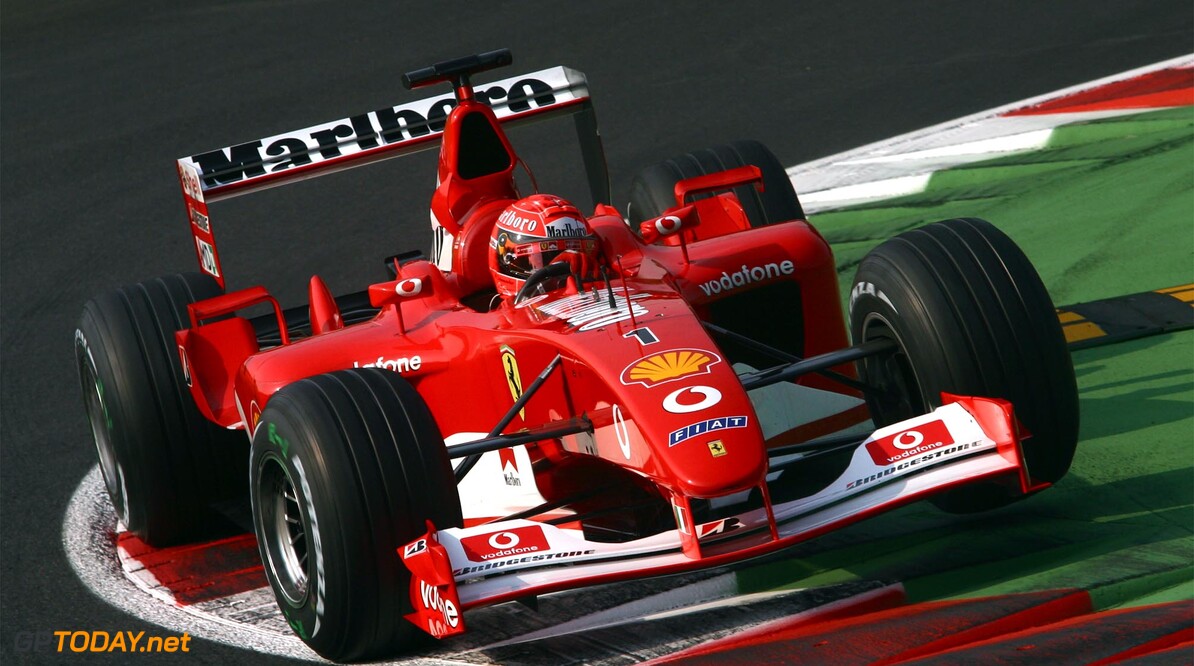 Michael Schumacher will turn 50 on Thursday, 3rd January 2019 which is reason for F1Today to look back through of the man who leads many of Formula 1's drivers' statistics. In the fifth edition - we look at his challenge in 1998, his interrupted year in 1999 and the dominant seasons he spent at Ferrari.

Michael had two excellent seasons in the Ferrari in 1998 and 1999 and it was down to bad luck that arguably halted him from taking the title during one of these years. It must be mentioned here that challenger Mika Hakkinen was in the 'prime' of his career. The Finn had two excellent years with the McLaren Mercedes combination and Michael came very close to his first world title in 1998 for his Italian employer. The German showed that he had learned from the drama of Jerez in 1996. During the 1998 season, he achieved six victories and was on the podium on five other locations. The worst incident for him must have been the crash with David Coulthard in the rain at Spa. The Scot, who wanted to

let Michael past in treacherous conditions, did so on the racing line and was hit from behind by Michael. Michael drove back to the pits on three wheels. There, he was furious at Coulthard. Eventually it did not come to blows between both drivers. Michael would later explain in an interview: "I do not know what Coulthard wanted to achieve at the time, but I really could not do anything to avoid that crash, in these situations you must have confidence in other drivers. What you should not do is brake on the racing line."

Heavy crash at Silverstone and end of title chances

In 1999, the season was halfway completed when Michael crashed his Ferrari against the wall in Silverstone. Everyone was in shock when the German could not get out of the car. It would eventually cost him the second part of the season. Several years later, Eddie Irvine talked about the incident: "The crash of Michael at Silverstone was the best moment in my career. I'm sure that every time he will pass that spot, he still has the 1999 situation in mind." The man with an outspoken opinion talked further about Michael: "When I heard that he was okay, I had a hard time stopping in. I always made room for Michael. Michael would certainly have become champion if he had not had that accident at Silverstone. I

had given too many points to him at the beginning of the year, so I finally missed the world title. But I will be honest, there is not a single driver on the grid who would not enjoy another's grief to get in the position for challenging for a world title. Formula 1 drivers only think of themselves, it was already war in Formula 1 and that it will always stay. " Micahel returned for the last two races of the year, and during the last race at Suzuka, Irvine came third and Michael second. Irvine ended the season in second place behind Mika Hakkinen. Even with a swap, Irvine would not become a champion. The Finn had taken more victories that year, and despite Michael missing seven races, he still came fifth in the championship.

The first title with Ferrari

The 2000 season started well for Michael. Direct competitor Mika Hakkinen retired during the first and second Grands Prix., while Michael took the win at both races. After four events, Michael had obtained 34 points 20, points more than David Coulthard, his pursuer. The buffer of two race victories, soon however, disappeared. A broken exhaust in Monaco caused a retirement. In Canada, Michael won the race, but in France, Austria and Germany he did not make it to the finish. A strong comeback from Hakkinen saw Michael lose the lead in the championship. But the second places in Hungary and Belgium ensured that Michael still was six points behind the McLaren driver with four races remaining.

The last four races of the season demonstrated exceptional class from Michael and Ferrari, winning every race from pole position. During the Japanese Grand Prix on October 8th, the German became the first world champion for Ferrari in 21 years. In 2001 the car and Michael were a dominant factor. A series of eleven podiums in thirteen races laid the foundations for his fourth world title. This was achieved in Hungary on 19th August, 2001. Michael became champion with almost double the points of second-placed David Coulthard.

The most dominant title

Where 2001 was relatively easy, Ferrari and Michael showed in 2002 that it was even easier. But the controversial 'let Michael pass for the championship' should not go unnoticed. What happened there on May 12th, 2002 on the A1 Ring in Austria is, according to the media, one of the worst things that ever happened in the sport. Barrichello made way for Michael to pass 100 meters from the finish. Giving a team order during the sixth race of the season was, of course, something that no one really could imagine. Yet you can say afterwards that it would be clear in advance that this would happen. Rubens Barrichello said later in an interview: "I was faster all weekend than Michael, I drove to pole, felt very good. When I asked Sunday-morning if I could just win the race, the answer was 'Yes'. So I also assumed that when I entered the last phase of the race, I was allowed to drive to the checkered flag. When they told me over the radio that I had to make way, and if I did not, I would have a hard time getting a Ferrari drive in the future. They threaten to destroy my future career. " Ross Brawn admitted in 2017 that this incident

was the biggest mistake in his career. Ferrari was eventually punished and fined $1,000,000 for violating Article 170 of the Sporting Regulations. During the race at Indianapolis, there was again an incident between the Ferrari drivers. Here too, the man who should have won the race was second. Michael went off his gas pedal on the straight and Rubens defeated him by 0.011 seconds. Michael wanted to make it a 'dead heat', which did not work. Michael closed the season with 144 of the maximum 170 points. He was on the podium during every race and only scored a third place once. Not surprisingly, Ferrari again won the constructors' championship.

Of all championships, the 2003 season was perhaps the most difficult. Michael got two real racers in Kimi Raikkonen and Juan Pablo Montoya as his main challengers for the title. At the start of the season, the Ferrari was behind. This was partly because the new car, the F2003-GA was not ready on time. During the first four races, the Italian team raced with the dominant car of 2002. It earned Michael only one victory during the home race at Imola. But he needn't have worried, as the gap in the championship was closable. And the new car, the F2003-GA, turned out to be a very good one. In the next six races, Michael earned the most points. Victories in Spain, Austria and Canada made it so the German took the lead of the championship. Due to an unexplained struggle, the Ferrari did not score any podiums during the British, German and Hungarian Grands Prix. In fact, the Ferrari was suddenly slow. The world champion was even put a lap down in Hungary by Fernando Alonso, who won his first Grand Prix. During the Grands Prix of Italy and the United States, Michael scored two much-needed victories. He entered the final race of the year at Suzuka as the championship leader. He finished in eighth place, which was enough to keep Kimi Raikkonen two points behind. The victory of Rubens Barrichello again made Ferrari the constructors' title.

The 2004 season was even more dominant for the Schumacher-Ferrari pairing. Michael scored fourteen podiums at the first fifteen Grands Prix, which included twelve victories. Michael would again be champion. His main challenger from 2004 came from his own stable even though it was apparent that Barrichello never had a chance in the title fight. But it showed again that the Ferrari was the dominant factor in the early '00s. Five world titles in a row for Schumacher still remains a record. With 148 points versus 114 from teammate Barrichello, Ferrari scored more than double the points of the BAR-Honda team. Only three Grands Prix were not won by a Ferrari driver. Trulli won at Monaco, Raikkonen won in

Belgium and Montoya won the final race in Brazil. With 119 for BAR and 105 points for Renault, both teams did not get close to the Ferrari score. This would be the last dominant year for Ferrari. In the end, 2005 turned out to be a disaster year with only a victory at Indianapolis at the 'Michelin-Gate' race. In 2006, Michael fought for the title, but eventually had to acknowledge his superior in Fernando Alonso. After 2006 the German decided to retire.

In our last part, we look back on a possible return in 2009 and his surprising comeback for Mercedes in 2010.