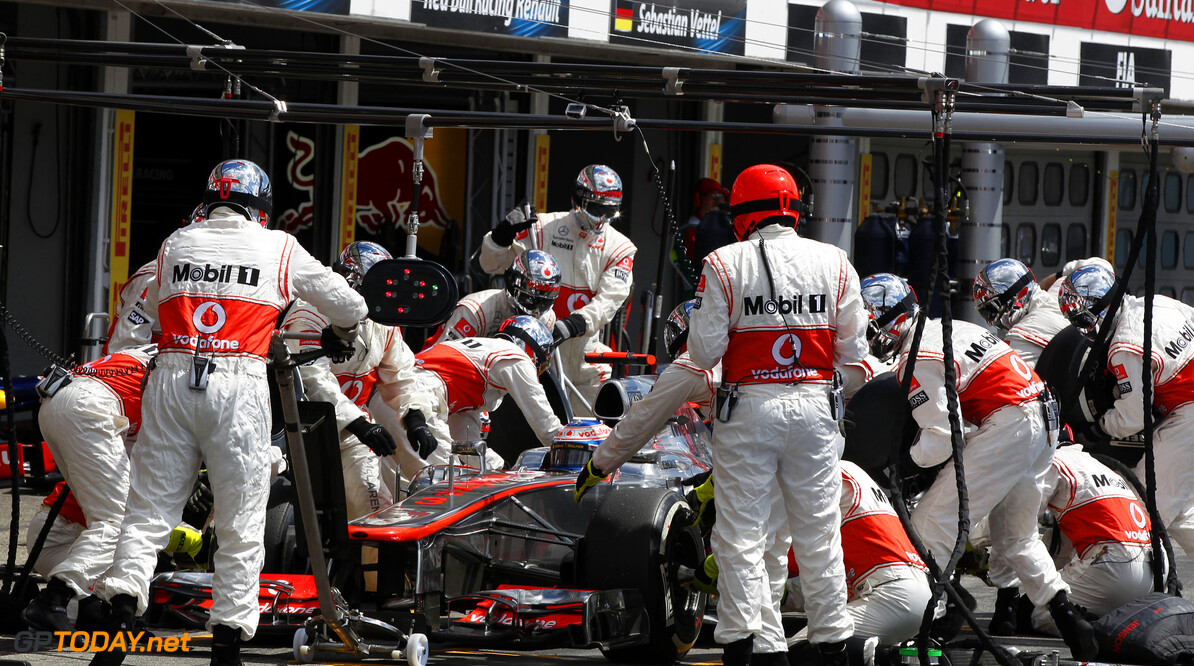 One of the most revered racetracks in the world, Spa-Francorchamps featured on the inaugural Formula 1 World Championship calendar in 1950 and has retained much of its original high-speed character to this day.

There have been two iterations of the circuit. The first was designed in 1920, using public roads and the natural elevation changes of the local Ardennes countryside. This layout measured 14km and was extremely fast: F1s final visit in 1970 saw cars averaging 150mph per lap.
More about McLaren


A substantial redesign 30 years ago shortened the circuit to seven kilometres and made it safer, while still retaining many famous corners from the original layout such as Eau Rouge and Blanchimont. It's now the longest circuit in F1 and a favourite among the drivers as a result of its challenging high-speed sweeps.

Average lap speeds are in excess of 140mph, which mean the drivers and engineers search for a good high-speed balance on their cars. Engine power and aerodynamic efficiency are also important because the cars are flat-out for more than 20 seconds between the La Source hairpin and Les Combes corner.

The fickle microclimate of the Ardennes can also play a role in the outcome of the race, too. Rain often plays havoc with race strategies, while also making track conditions treacherous, which is why the Belgian Grand Prix sees such a regular occurrence of Safety Cars.

McLaren has an enviable record at Spa. The team's founder, Bruce McLaren, won at the track in 1968 and the team has taken 10 subsequent wins at the circuit. Lewis and Jenson will be hoping to add further to that tally this year.

Jenson Button: "The past few weeks have been a perfect combination of a bit of downtime to relax and some great training, all of which has had me raring to get back in the car. I've been out in the Philippines; and Hawaii, training, and having a bit of a holiday and then back in the UK for a bit more of the same and while Ive had a great break, Im really looking forward to getting back to work."

"In fact, you couldn't really ask for a more spectacular double-header for F1's return: Spa is the daddy of them all, one of the all-time great grand prix tracks, and Monza is one of the most historic and evocative circuits on the calendar."

"They're each places with their own unique atmosphere. I've got some really great memories of both circuits, but I've won neither. Given our pace in the last few races, I go forward feeling positive about rectifying that over the coming weekends."

Lewis Hamilton: "My win in Hungary was a fantastic way to go into the summer break: it had the added bonus of sending the whole team away for their holidays with a positive feeling in their hearts. It's also given me the hope and assurance that we can come back for the final nine races with a real chance to go for both world championships."

"I really couldnt be happier that the season gets back down to business again in Belgium. Spa is one of the best circuits in the world  it's always a buzz to nail a fast lap around there, and, after five weeks out of the cockpit, that first lap on Friday morning is going to feel absolutely sensational."

"Given the unpredictability of the sport, I think it's still difficult to predict accurately who'll win the next grand prix, but I reckon the coming few weeks ought to give us a much clearer idea of the destination of the world title."

"It's going to be an extremely tough, tactical and interesting finale to the season. There's no team with a clear advantage  although we're all pushing hard to catch Fernando [Alonso]'s points tally in the drivers championship  so there's still everything to play for."

Martin Whitmarsh, team principal: "The summer break has given everybody at Vodafone McLaren Mercedes the chance to rest and recharge our batteries ahead of the nine remaining grands prix  all of which are set to be thrilling and fascinating in equal measure."

"It feels appropriate to be returning to the fray at Spa-Francorchamps. Formula 1's historic venues provide us with a richly storied backdrop that few sports can match, and Spa is truly one of the greats. Everybody is looking forward to hearing the engines fire up in anger once more, and there are few better places on earth to watch a Formula 1 car at speed than around Spa."

"Following the mandatory factory shutdown, we're fortunate to have had two full weeks available to prepare ahead of the Belgian Grand Prix. As usual, we're heading into this double-header hopeful of closing the gap to the leaders in both the drivers' and constructors championships. Lewis's victory in Hungary certainly provided further proof to us that we can take on the fight for both  and that remains our aim: to win both world championships."
F1 News Jenson Button Lewis Hamilton Mercedes McLaren
<< Previous article Next article >>
.