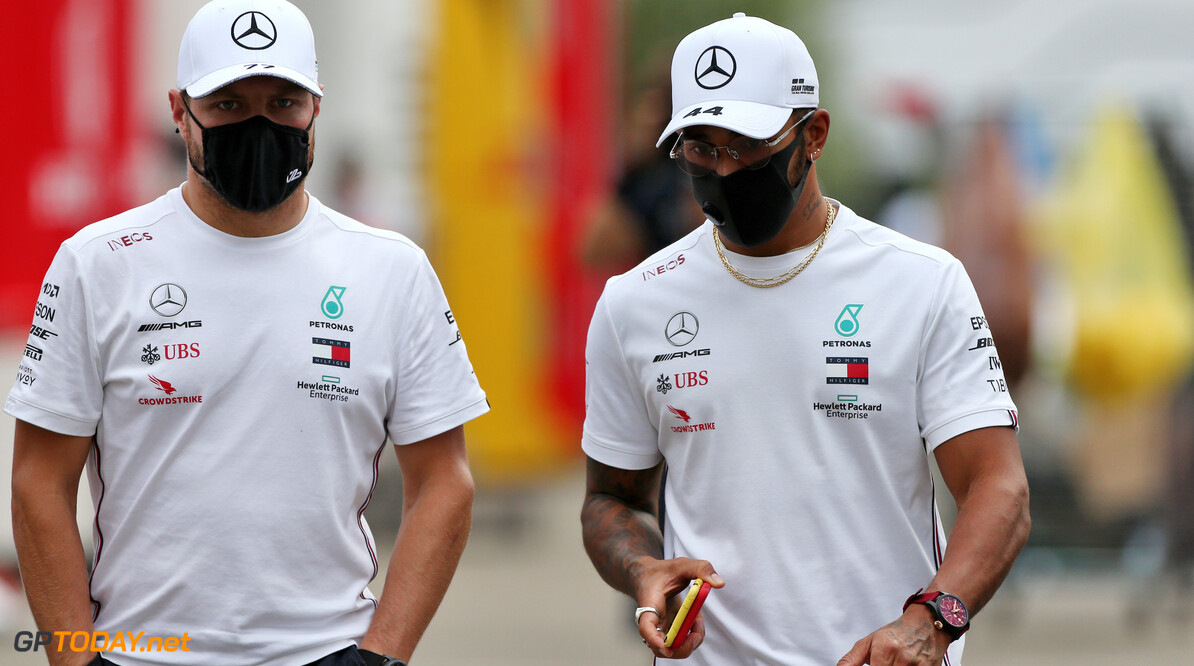 Lewis Hamilton claimed the win in a bizarre race this afternoon which saw two red flags, followed home by teammate Valtteri Bottas, with Alex Albon rounding out the podium to take his first podium in F1.

The very first Tuscan Grand Prix had a dramatic start, as Hamilton lost the lead to Bottas on the start, while a collision between Pierre Gasly, Kimi Raikkonen, Romain Grosjean and Max Verstappen at turn two left all but the Alfa Romeo and the Haas out of the race.

Just ahead of the corner,  Sebastian Vettel was powerless to avoid a spinning Carlos Sainz and clouted the McLaren, breaking his front wing. The chaos at the start brought out the safety car.

Verstappen lost power as he pulled away from the line, causing the Dutchman to drop down the order and eventually into the gravel after his incident.

George Russell noted ahead of him that Renault's Esteban Ocon rear brakes was on fire, suggesting for him to pit.

Despite restarting the race on lap eight, the safety car was deployed immediately after Sainz, Antonio Giovinazzi and Kevin Magnussen all came together on the main straight in spectacular fashion, which would ultimately bring out the red flag, Nicholas Latifi was also taken out in the massive shunt.

Six cars were now out with only nine laps gone in the Grand Prix. All drivers were unhurt in the accident, as Grosjean was lucky not to get any further damage in the incident. Ocon would not take the restart due to an issue, and would retire from the race before the restart.

As the race restarted at 3:55 pm local time, a standing start would set the cars off for the second race in the row. The two Mercedes of Bottas and Hamilton opted to switch to mediums, as the field behind apart from Raikkonen and Russell went for fresh soft tyres.

A good start for Hamilton saw him wrestle the lead from Bottas, while Albon dropped down the order to seventh, with Stroll and Perez moving up to fourth and fifth.

Ricciardo was on the move, pushing up to fifth at Perez's expense on lap fifteen as Albon closed up on the Racing Point after. Stroll looked to take third off Leclerc, but could not find a way around the Ferrari.

Stroll finally moved past Leclerc for third on lap eighteen, as Albon shot past Perez on the outside of turn one for sixth. Ricciardo was next past Leclerc for fourth on the following lap, with Albon demoting the Ferrari to sixth on lap twenty.

Perez moved up to sixth at Leclerc's expense as the Ferrari suffered from tyre wear, prompting Leclerc to pit for hard tyres on lap twenty-two and dropping him to last of the cars remaining in thirteenth.

Upfront, Hamilton led but teammate Bottas was not letting his Mercedes partner get away, holding a two-second gap to the British driver.

Hamilton complained of a loss of rear grip on lap twenty-five, having done only sixteen of the predicted thirty laps that the medium compound can manage.

Bottas told his team on the radio to choose the opposite compound to Hamilton when the duo pit for their stops, in an effort to chase down his teammate. Ricciardo was next to pit, as Norris moved up to fifth past Perez.

A slow stop for Raikkonen forced him to the back of the grid on his stop. Replays showed the pit crew struggling with the rear of Raikkonen's car as they changed the tyres, prompting the rear jack man to hold Raikkonen as the crew checked the tyres, amounting to a thirteen second stop for Alfa Romeo.

As Bottas started to drop away from Hamilton with tyre wear issues, he decided to box on lap thirty-two for the hard compound tyres, as Bottas set off after the lead.

Hamilton pitted on the following lap on the same compound as Bottas, despite Bottas' pleas to switch compounds. Ricciardo was promoted to third when Albon pitted from second, the Red Bull re-joining in fifth.

Leclerc pitted for a second time on lap thirty-eight for a set of mediums, as Ricciardo, Stroll and Albon closed up for the final podium position.

Both Mercedes were warned to stay off the kerbs as in the season opener in Austria, this time to help protect the tyres. Albon was on the move with the medium tyres, setting the fastest lap on lap forty.

Lance Stroll brought out the yellow flags on lap forty-four, with Bottas reacting instantly to pit for medium tyres. Stroll went off at turn nine into the barriers but was alright after the incident, a puncture on his rear tyre was suspected as the cause of the crash.

Hamilton was able to reclaim the lead from Bottas as he pitted, as a second red flag came out to suspend the session in order to fix the barriers after Stroll's accident.

Raikkonen was then put under investigation for a late entry into the pit lane and crossing the pit entry as the drivers got ready to restart the race at 5:12 pm local time.

As the third standing start of the race took place, Hamilton got away in the lead as Ricciardo moved into second ahead of Bottas. Raikkonen was given a five-second penalty for his incident at the pit entry, as Bottas re-claimed his second place from Ricciardo.

Leclerc worked up to ninth, as Albon pushed to catch the Renault of Ricciardo ahead. He claimed third place off Ricciardo with eight laps to go, the Thai driver looking for his first F1 podium.

Albon then set about on Bottas' second place. However, Bottas himself was closing on leader Hamilton, taking the fastest lap in the process.

On the final lap, Hamilton fended his teammate to take the inaugural Tuscan Grand Prix win as Albon came home to take his first F1 podium.

Raikkonen finished eighth on the line, but was demoted to ninth, promoting Leclerc up to eighth. Sebastian Vettel took the final point in tenth, with Williams' Russell just missing out on his first F1 point in eleventh.