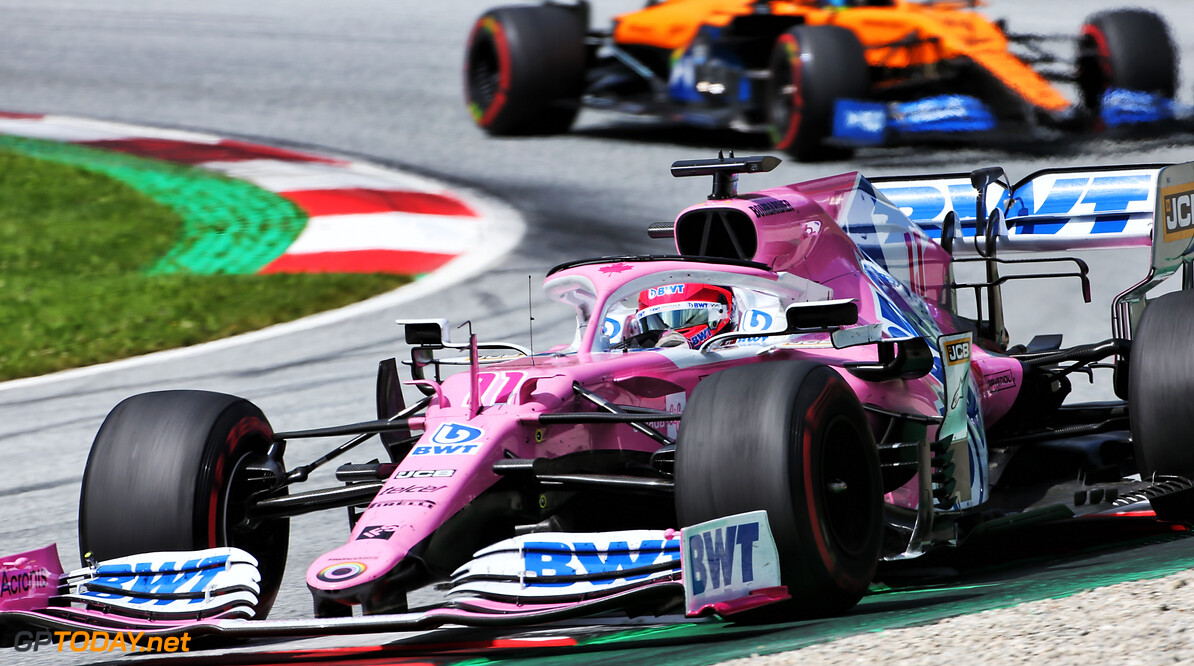 Perez feels 'lucky' to only lose one position after Albon crash

Sergio Perez says he was lucky to lose just a single position following his crash with Alexander Albon at the Styrian Grand Prix.

The Mexican sustained front wing damage after a late-race collision with Albon as they squabbled for fourth place on the track at Turn 4.

Perez subsequently dropped back from Albon and conceded fifth place to Lando Norris before the final corner on the last lap, and was close to being passed by teammate Lance Stroll and Daniel Ricciardo at the line.

Despite the incident, Perez says he was pleased with his recovery drive, having starting the race from 17th on the grid.

"I think it was a great recovery, great pace from the car, the team did a fantastic strategy," Perez told Sky F1.

"We managed to recover, we went all the way to P5, nearly P4 in the end. I was pushing really hard on Albon, and I didn't have any opportunity other than the one that I took, and unfortunately, I touched at the wrong angle.

“Basically I understeered a bit towards the exit. I opened up the steering wheel and picked up the power, and then I broke the whole front wing. I was very lucky just to lose one position from that.

"I had to give it a go, especially because we were pushing flat out with all what we had. That was only the opportunity I was going to have, Albon was quite strong in that medium part and unfortunately, that didn't work. But in the end, I'm lucky just to have lost one position."

Racing Point's pace on Sunday contrasted massively compared to Saturday's wet qualifying session, where it was outpaced by its midfield rivals.

Perez is confident Racing Point has learned why it was not competitive in wet weather conditions which will lead to stronger performances next time in similar circumstances.

"I think that was a big surprise, we were so competitive in the dry, and normally that translates pretty well to the wet,” he said. “That wasn't the case yesterday.

“But we were able to get a lot of understanding from that session. I think in another wet session we should be a lot better.

"I think we did a pretty good step from last weekend to this one. And obviously the car is pretty new in a lot of areas. We changed the concept totally.

"We're learning from it. And there is good understanding from it and we are definitely looking forward massively to Hungary."