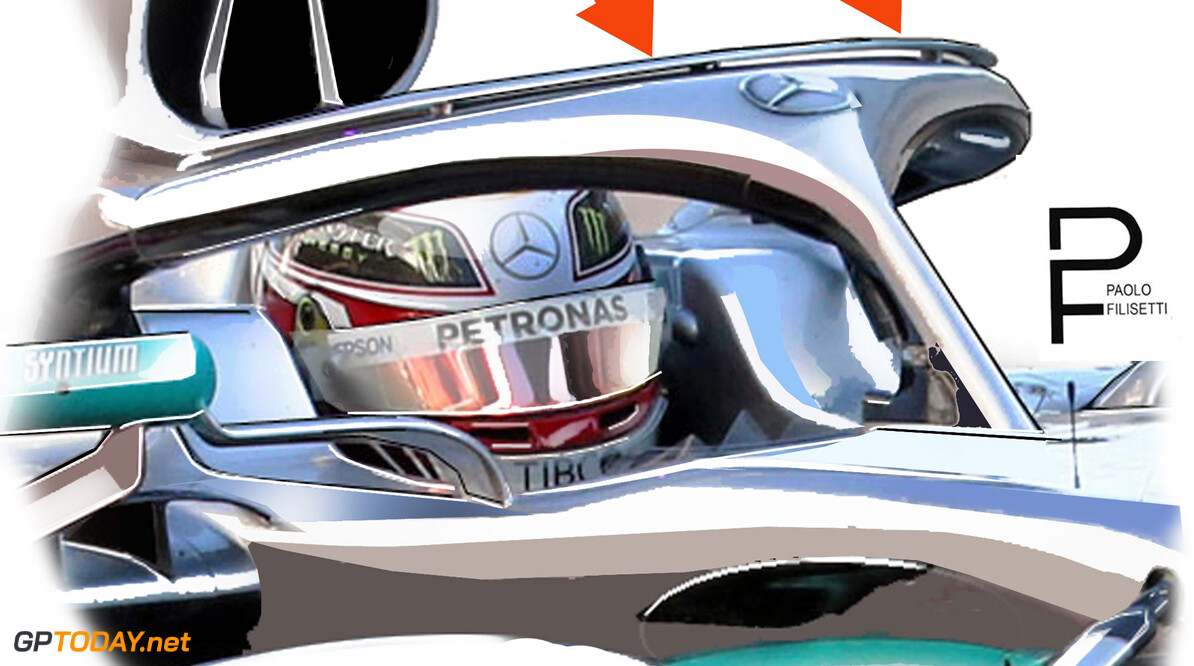 The aerodynamic configuration of the SF90, thanks to the possibility of adopting reduced height from the ground, by virtue of the regularity of the asphalt surface, has been enhanced both in fast bends and in a straight line.

Indeed, in the direct comparison between Ferrari and Mercedes it was clear that the two respective cars were in fact complementary in terms of efficiency. The SF90 was dominant in a straight line, as if it adopted by default a more performing mode of the power unit (but that was not so).

The W10 gained in some areas with a particular precision and agility in the changes of direction. That said, the answer that the Maranello technicians expected came in the first free practice session, with the SF90s able to monopolize the first two positions and never abandon them, qualifying included.

The area in front of the sidepods, characterized by the series of diverters and scimitar profiles on the SF90, was observed for a long time by several rival technicians on Thursday, every time the car was taken to the FIA scrutineering garage, for dimensional checks.

Among the rival technicians, it is clear that the aerodynamic configuration of the Ferraris guaranteed, on this track, a balance not reached by any other opposing car. After the race, it is correct to point out that some have raised the question, half-heartedly, that the problem that deprived Charles Leclerc of his first F1 victory can be traced to overheating that would have caused a problem in one cylinder.

For the sake of clarity, the problem, thanks to the RECOVERY mode, set by the Monegasque pilot at the suggestion of the team, allowed despite a high power loss (about 100bhp ), to finish the race, even with an increase in consumption.

However, it is understandable that for many external observers, the choice made by Mercedes may have been considered winning. It invested in the reliability of the power unit, opening wide vents on the bodywork of the W10. Reiterating further, it was not the reduced heat exchange that crippled the first of the two Ferraris at the finish line.

It was equally over at Brackley, because of the advanced configuration (introduced in the second week of testing at Montmelò) of the sidepods that were deeply tapered, they tried to guarantee an effective heat exchange.

It is also interesting to note, the attention to the internal temperatures of the endothermic engine and to those of the ERS components was high on the starting grid. The fans connected to the sides of the sidepods were used at maximum rotation speed, sending refrigerated air through large containers of dry ice.

Mercedes, however, was not the only team to pay close attention to sudden and damaging surges in the engine's internal temperatures. In fact, Red Bull (and this is the first time that has happened) has introduced on the RB15, a large vent behind the base of the halo, increasing the heat exchange.

The Honda power unit, which so far has shown reliability of which there is no recent and prolonged memory, has nonetheless shown performance limits in the Sakhir straights. The aerodynamic efficiency, always the pride of the cars designed by Adrian Newey has been partially sacrificed on the altar of reliability, but it seems only right to say it, successfully.

Interestingly, on the other hand, observing how the Racing Point is progressively trying to improve the effectiveness of the RP19, by slightly developing the lower section of the barge boards, trying to increase the efficiency of the bottom of the car. 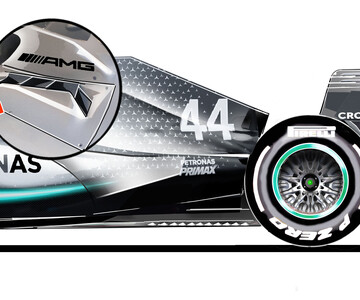 Mercedes has equipped the W10 with large slots on the sides of the cockpit, to improve heat dissipation, in relation to high ambient temperatures. It is interesting to note how deep is the opening in the upper part of the bodywork equipped with a series of inclined fins for better management of the outflowing  hot air flow. The precautionary measure adopted is striking for its breadth, and detrimental of aerodynamic efficiency, a non-secondary factor on this track. 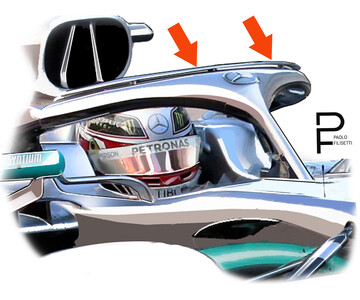 W10 additional profile on the halo

The cleaning of the direct flow towards the rear axle and the engine air inlet are important elements in Sakhir. Mercedes has equipped the halo with an additional profile, with the function of separating the fluid threads and diverting them to the engine inlet and the rear wing. 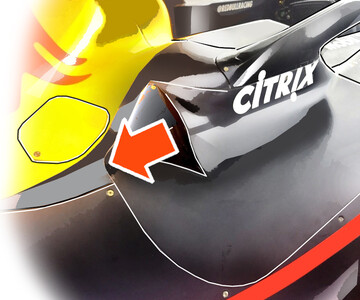 The RB15 has been equipped with a wing located behind the halo base slit for practice and race, to increase the heat exchange of the Honda power unit. Remember similar solutions adopted by Ferrari and Mercedes, but this one is characterized by a larger section compared to them. 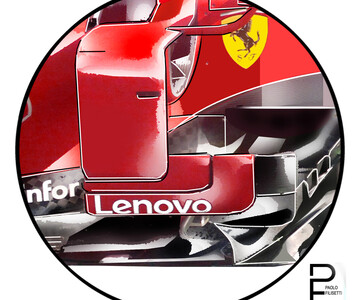 No particular news to report, if not the particular attention to this area of the Italian single-seater shown by rival engineers. It is in fact clear that the high load generated by the bottom of the SF90 is obtained through effective management of the flow directed to the entry edge of the bottom, thanks to the complex system of flow diverters placed before it. 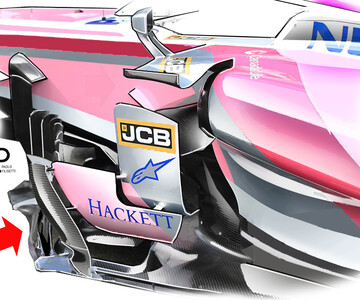 The RP19, so far, has not shown performance at the level of the 2018 (Force India) car. The project should soon, however, see the introduction of broad developments. In the meantime, minor interventions continue, in this case on the horizontal profiles of the deflectors, for a more effective deviation towards the outside of the turbulence and better feeding of the floor.