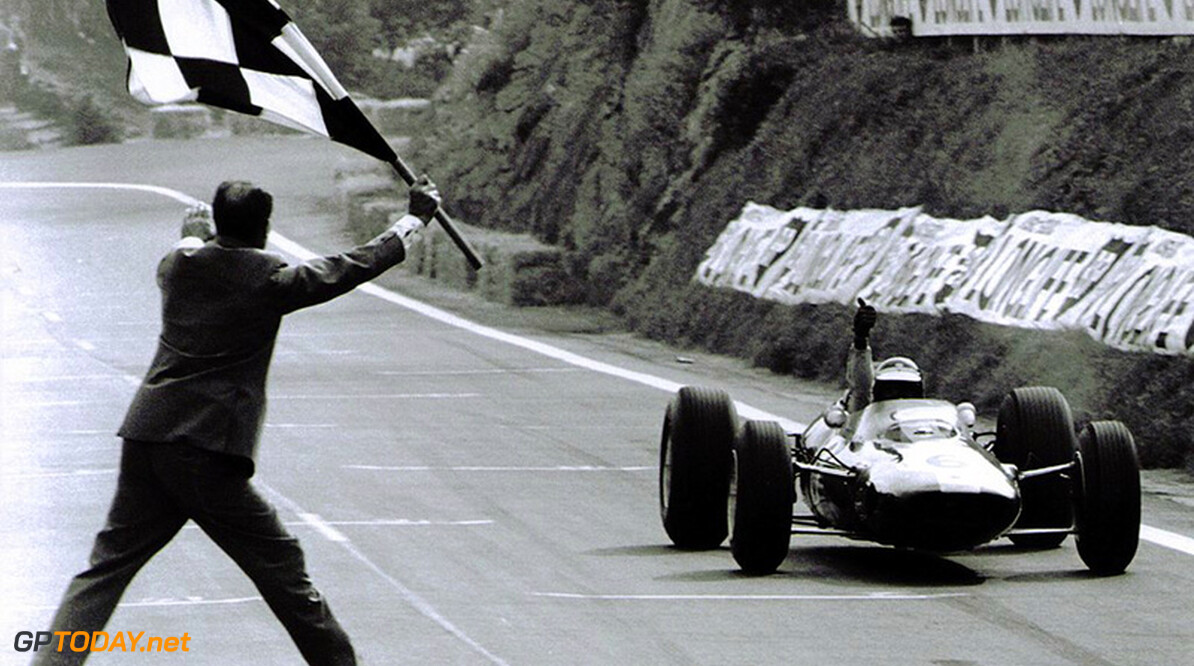 In the valley of the Massif Central, in between the remains of volcanic activity, rising above the green delta of the Auvergne, the two cities of Clermont and Montferrand lay peacefully and quiet. Combined to become Clermont-Ferrand, the city is the capital of the 63st department of Puy de Dôme. In 52 b.c. the valley of Puy de Dôme formed the theatre in which Julius Caesar faced the Visigoths at the battle of Gergoria. Later it became an industrialised city, erected from lava stone, where the Michelin brothers would start their tyre business and where Lolo Ferrari had her cradle. Four times has the city been woken up by the sound of screaming Formula One cars, which were cutting the corners of their public roads so sharp and so quickly that the lava stones flew around, cutting tires and denting helmets. Where the high speeds and lingering corners carved out of the Puy de Cherrand and the Puy de Gravenoire made some drivers wear open helmets for if they had to undo themselves from their lunch. Better known under the drivers as the 'little Nürburgring', the circuit of Clermont-Ferrand is 8 kilometres in length and houses 51 corners where only the immortals dare to go to the limit. For the motorsports enthusiast, Clermont-Ferrand is best known for her beautiful, enticing, thrilling circuit de Charade/Louis Rosier.

Pre-World War One France was known as a place where machines built for speed were given ground to play on. At first, pre-war races were held on improvised and primitive roads and muddy fields, linking one village to the other. After the Second World War, when the country was rebuilt, the new and/or otherwise improved infrastructure made for great improvised racetracks, that took public roads and closed them off to create the world’s most legendary race tracks. By organizing race tracks in this fashion, every city in France created its own circuit on its own public roads. Rouen, Le Mans and Reims are great examples. Plans to create a circuit around the volcanos of the Puy de Dôme were presented as early as 1908, but it would take till after the Second World War before realistic plans were made. First they thought of a street race through Clermont-Ferrand, but after the horrific crash at Le Mans that year, killing over 85 spectators, this plan was cancelled. Between 1955 and 1958, Jean Auchataire of the Association Sportive l'Automobile Club d'Auvergne (ASACA) created the circuit de Charrand. A track around the Puy de Charade and the Puy de Gravenoire. After constructing a dedicated pit-straight and a few corners to link the pit-straight to the public road, races were finally ready to be organized.

First of such was in 1958 with the Troi Heures d'Auvergne. A three-hour race in the Le Mans GT-class won by Innes Ireland in an 1100cc Lotus Eleven. The race was a success, and the track lay-out was favoured by many drivers. The following year, Stirling Moss got his first experiences with the circuit de Charade: "I don't know a more wonderful track than Charade." I have the impression that Moss was spot on. Quit a few videos circle the web where the viewer can experience a bit of the old track. And it becomes apparent how beautiful the corners sweep the hills. The apex hangs low in the corner. You point the nose and dive to the right, no understeer, no oversteer, just rolling the car through till the tarmac levels and straightens the car. A lefthander immediately appears after, you brace your shoulders and slam the nose in the next corner. Your stomach gets pushed into your seat. The 1500cc Coventry Climax V8 screams at 8000 rpm. Twenty seconds behind you a BRM V8 roars in its chase for you, Jackie Stewart behind the wheel. No sight of the Ferrari's. John Surtees in his Italian V8 can't keep up with the pace while Bandini's flat V12 lacks the punch to convert a third place in qualifying and his rushing to keep up with a strong performing Dennis Hulme results in a crash. He is out of the race, no thanks to Ferrari team manager Eugenio Dragoni for pushing him beyond his capabilities. The last few corners loom on the horizon. The long bend of the Tetre de Thèdes where you let the car plummet down to the last parabolique. The roar of the arena, the pits straight right in front of you. The checkered flag, the third victory in four races.

When seeing the nostalgic footage, one cannot keep himself from feeling a bit like Jim Clark, who took the win at the inaugural grand prix of France at the Circuit de Charade in a Lotus 25, finishing in front of Jackie Stewart (BRM) and John Surtees (Ferrari). The venue, although brand new, lacked the capacity for the Formula One circus and all the media that came with it. The garage, where the cars were prepared, was not much more than a few square feet of grass and some tape to enclose it. Concrete blocks were installed to make sure the F1 cars didn't come crashing down through the rooftops of Clermont-Ferrand, giving the firemen a hard time. Jim Clark won the 1965 grand prix of France with overwhelming domination. This had a lot to do with this beautiful and smooth way of handling his Lotus. The sexy, rolling, sweeping corners of Charade asked for a tender touch of the steering wheel. Clark was able to dance with his Lotus like no other. The images of him driving around the volcanos of the Puy de Dôme are utterly breath-taking.

Okay, so the weekend wasn't entirely smooth sailing for Jim Clark. During the weekend, Clark went out for dinner with non-other than Yuri Gagarin (the first man in space in 1961) who was touring Europe to give readings on his adventure. Clark, his girlfriend Sally, Chapman and team mate Mike Spence were invited. They took their Peugeot rental and went out. When returning to their hotel, Chapman drove the Peugeot in a ditch. Spence was okay, but Chapman bruised his thumb, Sally was bleeding from a head wound while Clark got torpedoed from the back seat. Upon seeing Sally bleed, he fainted after which he was mostly disturbed about the state of his suit. The weekend was still on though. During free practice, his car broke down. John Surtees was kind enough to give Clark a ride back to the pits on top of his Ferrari. So it seems that the classic hop-on-to-get-a-ride-back-to-the-pits is as old as Formula One itself. During qualifying and the race, Clark was dominant and took a great victory, his third in four races. Clark was during the entire '65 season in a league of his own, resulting in him taking his second and last world championship title.

Circuit de Charade found its way back to the Formula One-calendar on three more occasions. Once in 1969 (Jackie Stewart, Matra), 1970 (Jochen Rindt, Lotus) and 1972 (Jackie Stewart, Tyrell). After 1972 the French GP moved from Charade to Paul Ricard, from which the drivers already got a taste in 1971. Charade became too dangerous. The low safety standard of the sport, strengthened by public opinion, made for safer and preferably permanent tracks. Furthermore, the track was littered with lava rocks that proved fatal for the tires. The '72 grand prix saw no less than ten (!) punctures. And not just the tires were victim. The rocks were also slingshot against the drivers' helmets. Jochen Rindt had a close call in 1970 whereas Helmut Marko got his left eye permanently blinded during the 1972 race, causing him to quit his F1 career. After 1988, racing on the circuit stopped all together. The ASAC built a dedicated racetrack around the pit-area where racing continues up until the present day. However, because of the close proximity of Clermont-Ferrand only seven days of racing are allowed in a year.

Circuit de Charade, one of the beauties from a bygone era. The thrilling, Nürburgring-like track conquered the hearts of many. You can still ride the old parts, as they are still in public use. If you are surrounded with wife and kid headed to a near campsite, no worries. The Côtes d'Auvergne knows a wonderful Pinot Noir. When saluting, look up to Clark and give a nod.