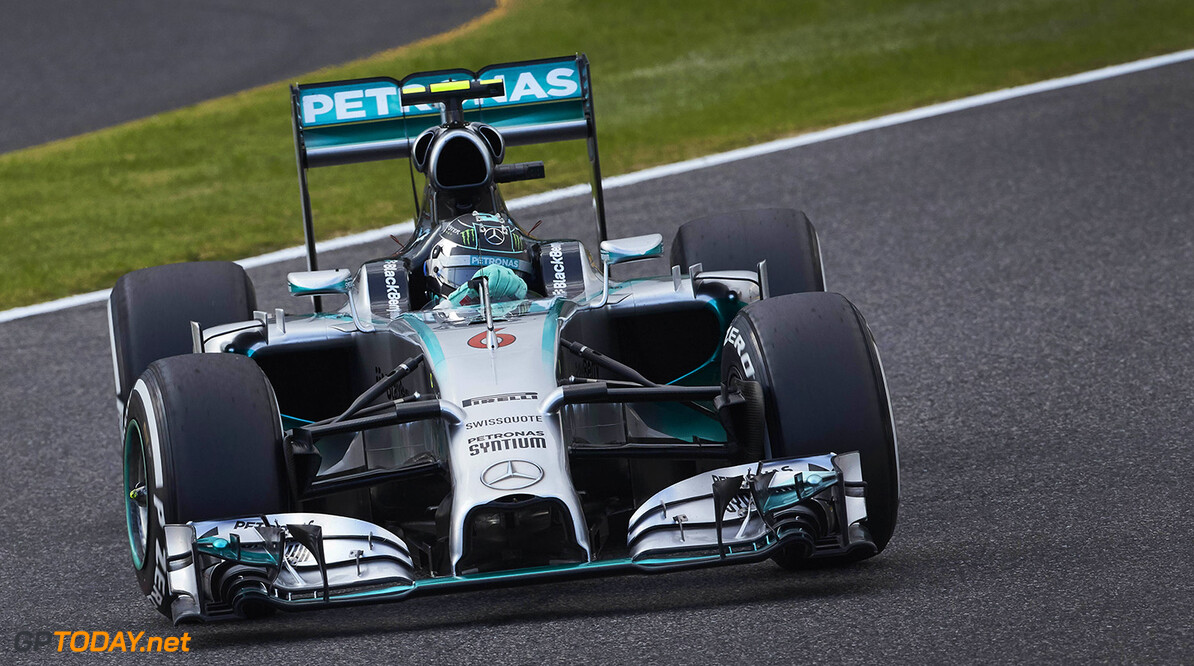 Qualifying for the Japanese grand prix took place at Suzuka, the usual silly season rumours were floating around, and some rumours came to fruition.

Vettel confirmed this morning that he will be leaving Red Bull at the end of this season for Ferrari. That has reinforced the rumours that Alonso may sign for McLaren replacing either Button or Magnussen. Kvyat will be promoted from Toro Rosso to the Red Bull seat to fill the boots of the four-time world champion.

Maldonado went into qualifying with a 10-place grid penalty for the use of a sixth Renault power unit.

Q1: A few cars make their way out onto the track early with the Caterham of Kobayashi leading them out.

Majority of cars took to the track and Rosberg set the first competitive pace of 1:33.671 but it was soon beaten by Hamilton who set a 1:33.611.

Both Williams set quick times but were still six tenths off the Mercedes drivers.
21 out of 22 cars had completed a lap time with 10 minutes left of the session, with Ericsson yet to set a time.

Rosberg had a little lock up going into the final chicane but wasn’t anything major.
With 8 minutes remaining, eight cars were still on track and Vettel was pushing his Red Bull to get closer to the top five.

Bianchi was the first to see the chequered flag but Ericsson out qualified both his teammate and his main rivals Marussia.

Mercedes top the time sheets followed by both of the Williams then Alonso in the Ferrari.

Q2: No cars took to the track straight away as they did in Q1 but it was soon busy with Sauber, Force India and Williams drivers heading out onto the circuit.

Bottas went onto the first timed lap, with Massa closely behind him, and set the initial pace for the session with a 1:33.801 and his team mate two tenths adrift.

However, it was soon beaten by Rosberg with a 1:32.950 and Hamilton just 0.032 behind him.
Hulkenberg went wide at Degner 2 but manages to keep the car under control.

Majority of cars set their fastest times and head back to the pits to prepare for the final push to get into the top ten. However, both Red Bulls were out of the top ten with just over five minutes remaining.

Bottas is first out to make the final push and takes advantage of the empty track, soon followed by both Red Bulls.

All cars are on track apart from the Mercedes who were confidently through to Q3.
Vettel had a little mistake coming out of Spoon. Both Red Bulls made it into the top ten but only just.

Bottas improved his time but was still half a second off the Mercedes.

Q3:First out for this part of qualifying was Bottas who in both Q1 & Q2 was fastest after the Mercedes.

Soon after both Mercedes and Alonso take to the track.

Bottas set the first quick time of this session with a 1:33.329. However, this soon beaten by Rosberg who was really pushing the car to limit setting a 1:32.629.

With five minutes remaining Raikkonen is the only driver to not set a time.

All the cars get on track to make a final push with just 3 minutes to go.

Rosberg is the first to see the chequered flag with Hamilton two tenths slower.

Rosberg took pole with a 1:32.506 making it his 12thpole position of his career in Suzuka followed closely by Hamilton in second and Bottas in third. The rest of the grid was Massa, Alonso, Ricciardo, Magnussen, Button, Vettel & Raikkonen.