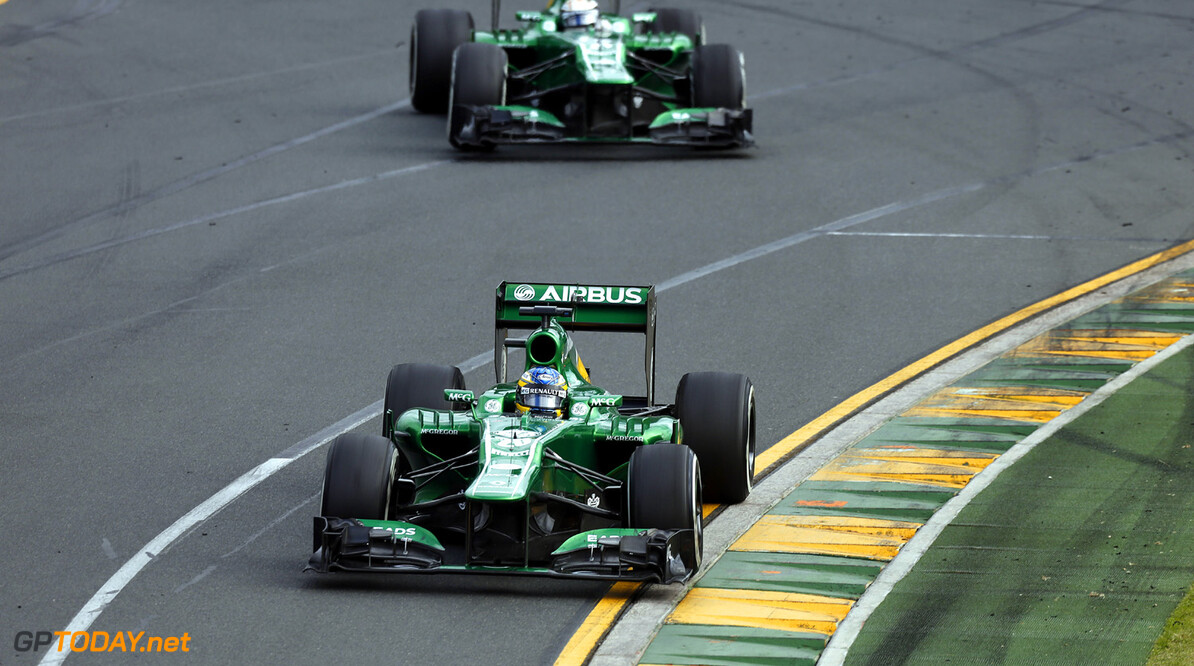 The Caterham Formula 1 team is holding a press conference at the moment in Leafield. The team announced Kamui Kobayashi and Marcus Ericsson as their new driver pair for 2014. Dutchman Robin Frijns will be test- and reserve driver.

Kamui Kobayashi: "It's a great feeling to be back as an F1 race driver and I'm really pleased it's with Caterham F1 Team. We've been talking to Cyril and Tony since last year about driving for the team for 2014 and beyond and throughout all our discussions I've been very impressed with where they want to take the team, and how much investment has been made already to help them achieve their goals. For me, it's a great honour that the team hired me based on the value I bring in racing terms, and the experience I have and I am so happy that I am able to make this announcement today. I will do my very best to lead the team and work as hard as possible to achieve our targets."

"I also want to give special thanks to all the fans who have made donations to KAMUI SUPPORT. Their donations and gestures gave me extra strength to come back fighting and I am very pleased that the money they raised not only helped me but will now go to helping Caterham progress this year. Every single one of you who helped with KAMUI SUPPORT will race with me in 2014 and that makes me very proud."

"I first visited the factory in Leafield just before Christmas and it's clear how hungry the whole team is to make progress. Last year was a tough season but the new rules this year mean that everyone in F1 is starting again and that means everybody has a chance to improve. From what I've seen, Caterham now has everything in place to progress this year and for many seasons to come. Were all realistic about what we can actually achieve this year, and until weve run the car properly at the tests its still too early to see where we are compared to the other teams, but whatever happens we have to move forwards this year. For me, it's a chance to start again with a new team but one thats serious about progressing, and for the team, 2014 is the first chance to show what they can do with all the people and infrastructure they've built up in Leafield since moving there in 2012."

"I can't wait to start work again, and one of the benefits to making this announcement so close to the start of the tests means I only have a few days to wait to get back on track! Before then I'll be at the factory as much as possible, working in the simulator and with everyone there to prepare as much as we can for the tests in Jerez and Bahrain. Physically and mentally I'm fully prepared, now I just want to get back to work!"

Marcus Ericsson: "This is a very proud day for me and everyone who has helped make my F1 dream come true. I'll be making the step up to F1 with Caterham F1 Team in 2014 and I'm already excited about the season ahead, and the first race in Australia in particular."

"It's obviously great for Sweden that we'll have a Swedish driver back on the grid in 2014. This is what Ive been working for since I first started racing karts back when I was nine years old, and now I know Im ready for the step up to F1. Caterham is a young team and together we can take on the challenges the new rules will present in 2014 - learning together and continuing to develop as the season progresses."

"After a good break at home over Christmas, the hard work has already started. My physical fitness has always been good but I've been working even more on that since the discussions with Caterham began, and Im going to be in the factory in Leafield as much as I can before and during the tests in Spain and Bahrain so I can play an active role in helping understand the 2014 car, and what we need to do to unlock its performance. We have a big task in front of us but it's an exciting one, and one both the team and I are ready for."

Robin Frijns: "I am more than happy that Caterham and Renault have given me the chance to be in Formula One in 2014. Nowadays it's rare to find an F1 team that will put so much trust in a young driver like me, but during the negotiations I had a very strong feeling that the team really believes in me, which I couldn't appreciate more! This was one of the main reasons why Caterham has been my number one priority for quite a while and I am so thankful that it worked out.

"There are many good reasons to believe that Caterham will be moving up the grid in the next few years and I feel that every member of the team is strongly committed and really working hard to make that happen. Also, when I visited the factory for the first time, I saw that the working atmosphere in Leafield is very positive, which gave me a good feeling right away. My personal goal for this season is to help the team as much I can and also gain valuable experience to make sure that I can establish myself in the team and in F1. I am sure that we will have many great years together."
F1 News Marcus Ericsson Renault Caterham F1
<< Previous article Next article >>
.