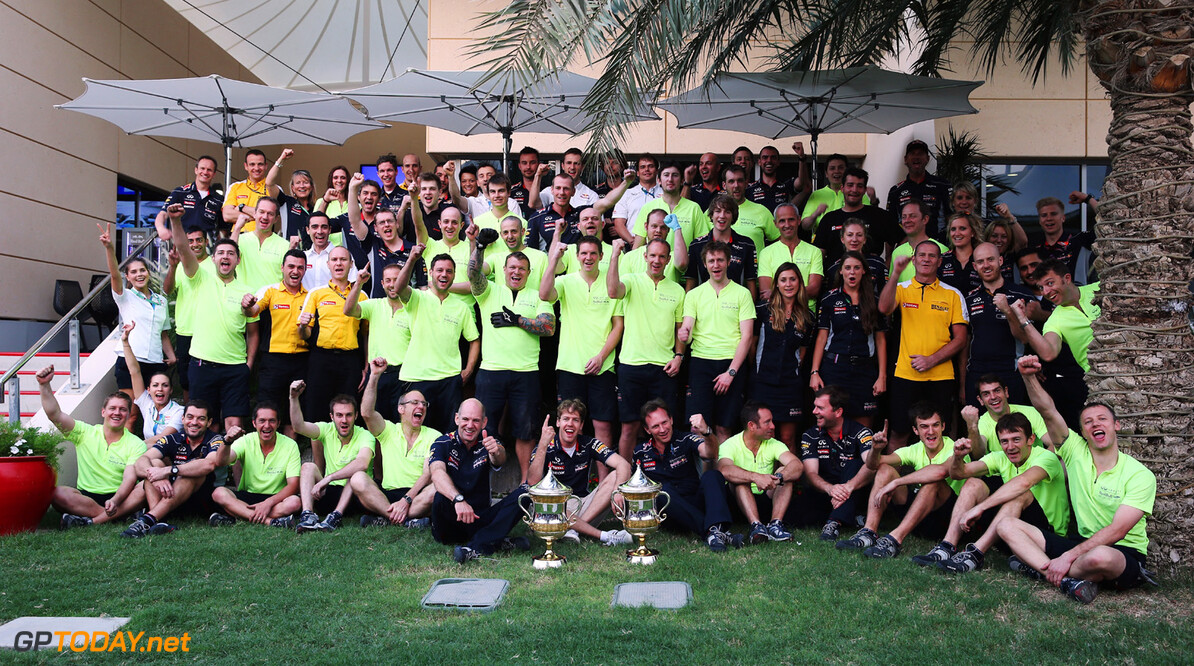 Red Bull will have EUR 25,000 less in its coffers for the championship party in Abu Dhabi, after the FIA toasted Sebastian Vettel's title win on Sunday with a penalty. The German was fined and reprimanded after breaking 'parc ferme' protocols and doing donuts on the front straight when he secured his fourth consecutive world title by winning in India.

But the FIA said it only decided against levying an even harsher penalty "due to the special circumstance". Vettel, of course, had equalled the feats of Alain Prost (4), Juan Manuel Fangio (5) and Michael Schumacher (7), who all also won at least four titles. "Phew," Vettel said, puffing his cheeks out in emotion, when compared to those greats. "I am way too young to understand what it means."

He muddied his emotion even more by constantly swigging on his magnum of podium champagne throughout the FIA press conference, and more drinks would follow. "We will celebrate a little bit," Red Bull's Dr Helmut Marko told German media, "with Sebastian's favourite drink." It is jagermeister "with lots of Red Bull". Bild newspaper said the party raged in a hotel until about 2am.

The bigger party will wait a few days. "Most of the team flies out tonight or tomorrow morning," Marko said in the Buddh circuit paddock. "We're planning a proper celebration for Abu Dhabi."

It was actually a stressful grand prix for the team. Teammate Mark Webber laughed bitterly as he returned to the paddock following his alternator failure, as his Red Bull is usually the one that breaks down. Team boss Christian Horner doesn't agree with that assessment, though, insisting that a cool look at the statistics shows that both Webber and Vettel "have had an equal amount of issues and failures".

Indeed, Vettel said the team was also worried about his RB9 in India. "I wasn't allowed to use the drinks bottle in the race," he revealed, "we switched the KERS off, we did everything to try to save energy at the end. The cars are built on the limit."

Development of the 2013 car will now finally stop altogether, amid suggestions Red Bull could be on the back foot for 2014, given key rivals like Ferrari, Mercedes and McLaren have been working on the all-new rules for next year for quite some time. "It's not a disadvantage," team supremo Dietrich Mateschitz told Salzburger Nachrichten newspaper, "because any development this year can also be something good for next year."

Still, as team boss Christian Horner pointed out, "Every driver in the pitlane would like to be in one of our cars at the moment," he is quoted by Agencia Estado news agency. Vettel was born to succeed at the wheel of one of the energy drink-branded cars. "At the beginning there were many in the team that thought Vettel was not the right thing for us," Marko recalled on German television Sky. Vettel added: "He (Marko) said, 'Give the boy a chance'. I'm glad it worked out."

He remains under contract for 2014 and 2015, and Prost - the only other holder of four titles - thinks Vettel could go on to match Fangio's record next season. "The rules are changing," the famous Frenchman told RMC, "so the drivers who are the most involved will undoubtedly have an advantage. And great engineers like Adrian Newey are best able to manage these changes. It is quite possible we will see Red Bull and Vettel dominate for quite some time," added Prost.

It must, however, be tempting for Vettel to bottle his Red Bull successes and turn soon to a new challenge with another team. "He can't stay at Red Bull forever," Prost agreed, according to Der Spiegel. "On the other hand, if he is always getting the best car at Red Bull, why would he change just to make the fans happy? He should only change if he wants a new challenge for himself."

After winning his fourth title on Sunday, however, Vettel admitted for the first time that recent bouts of booing had affected him. "I didn't find it easy," he told Bild newspaper, "especially when I had done nothing wrong. My girlfriend (Hanna) really helped me with that."