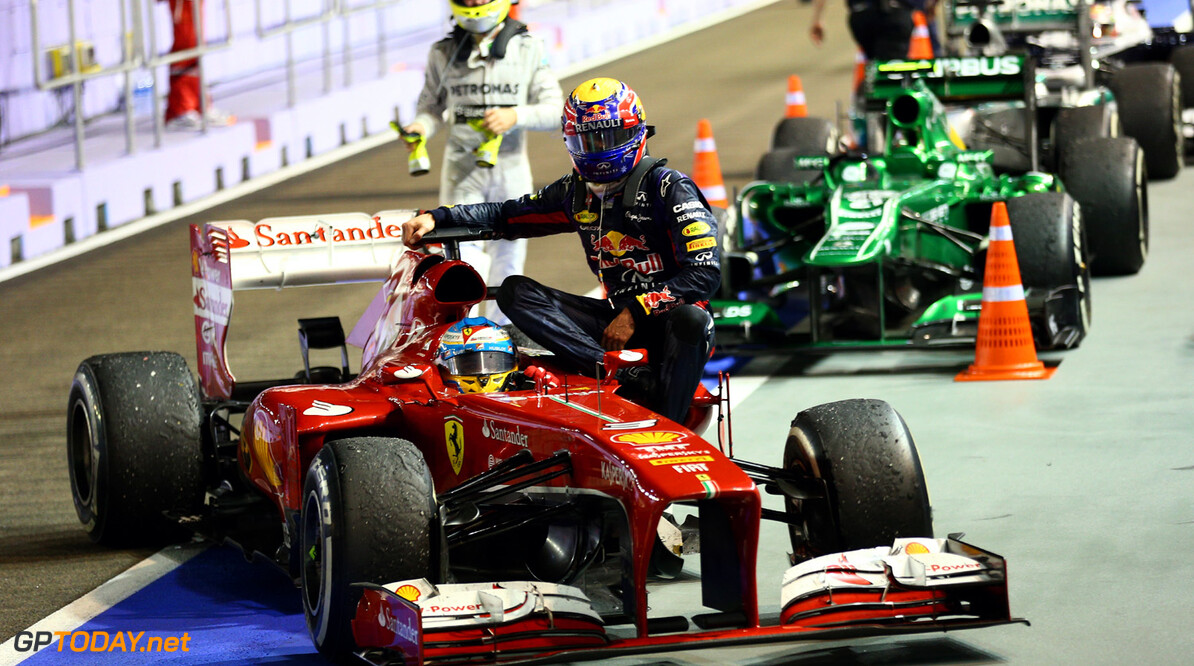 Mark Webber and Fernando Alonso have slammed and ridiculed the ten-place grid penalty the Australian will have to serve next weekend in Korea. Webber was penalised for hitching a ride on the sidepod of Alonso's Ferrari after breaking down at the end of the Singapore grand prix. He is furious. "For Alonso and me to receive reprimands for our actions after the race is comical to say the least. Great moment, and fans loved it," Webber wrote on Twitter.

He posted a montage of 12 similar 'taxi rides' throughout F1 history, including when Singapore steward Derek Warwick rode on the engine cover of Gerhard Berger's Ferrari. "Yes, I thought it had been done before," added Webber. The 37-year-old, who is leaving F1 at the end of the season, also denied marshals told him not to cross the track in order to climb aboard Alonso's stationary car. Friend Alonso also joined the Twitter condemnation, posting a photoshopped image of himself and Webber in a taxi, with the caption addressed to the Red Bull driver: "Ready for Hollywood?"
More about Ferrari


FIA steward Warwick had defended the penalty on the basis that drivers on the slowing-down lap had to swerve past Alonso and Webber, because the Spaniard had parked on the racing line after a blind corner. But Webber's former Red Bull teammate David Coulthard insisted: "Who were Webber and Alonso putting in danger? In reality, only themselves. And that's what they do every time they strap themselves into their racing cars," he wrote in a column for the BBC. McLaren's Jenson Button agreed: "(I'm) disappointed to see the penalties for Webber and Alonso; (an) act of sportsmanship should not really be punished," he said on Twitter.

Sections of the press are also highly critical of the penalty. "It is petty and hypocritical to accuse drivers who have risked their lives for two hours at an average of 200kph between concrete walls to have acted dangerously. It is treating them as though they are children who don't know what they're doing," Autosprint's Alberto Sabbatini said. "Actually, as we could see from the cameras, (Lewis) Hamilton was doing only 60kph (when he passed Alonso-Webber) -- ridiculous(ly slow) speeds for the brakes and reaction times of professional drivers," he insisted. (GMM)
F1 News Fernando Alonso Jenson Button Ferrari McLaren
<< Previous article Next article >>
.