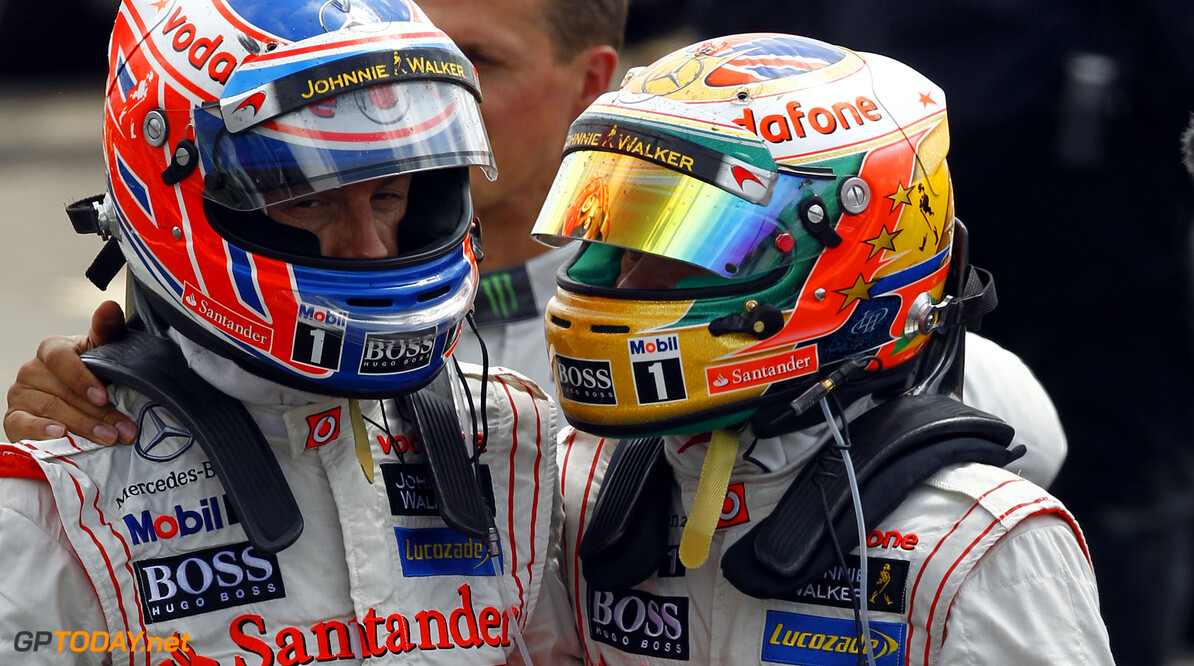 Jenson Button has revealed he is "disappointed" Lewis Hamilton gave away McLaren secrets last weekend at Spa. In trying to show his million Twitter followers why he was so much slower than the sister McLaren in qualifying, Hamilton published a highly-confidential telemetry image that also contained sensitive information about ride heights and acceleration rates.

The 2008 world champion was reportedly scolded behind closed doors for the breach, although team boss Martin Whitmarsh and communications chief Matt Bishop have been trying to play down the affair.

"Very surprised and, yes, disappointed," Button answered when asked how he feels about the Hamilton incident.

"We work so hard to improve the car and to keep things like that secret and private. I didn't want to see it on Twitter. It was the whole telemetry from qualifying."

Button also said he thought Hamilton was making an irrelevant point about the 6 tenth top-speed difference between the new and old wing specifications.

"He (Hamilton) should be gaining it back in the corners because he's got more downforce on. And I was eight tenths quicker in qualifying anyway," Button insisted.

Gary Anderson, a former F1 technical chief who now works for the British broadcaster BBC, said the fact Hamilton opened a "cupboard" of McLaren secrets to the world "shows how naive" the Briton is, and "how little he understands the big picture".

"The data in there isn't any great use to anyone, so I don't think there is much damage done," he said.

But the BBC cited an unnamed engineer who said rival teams could 'work out how McLaren were running their car' from the telemetry sheet.

Former long-time McLaren driver David Coulthard wrote in the Telegraph: "Teams go to great lengths to protect that sort of information. "I remember when I started out there used to be bin hokers who would go through the rubbish bins of rival teams on a Monday after a race, searching for just such telemetry.

"Nowadays everyone has shredders in their motor homes and high-tech security on their computers. "It's another lesson learned for Lewis, I'm afraid."

Former Toro Rosso driver Jaime Alguersuari added: "I would never do something like this because it is a kick in the teeth to confidentiality, to yourself and to your team, who are all working so you can do your best and the company can improve." (GMM)
F1 News Jenson Button Lewis Hamilton McLaren
<< Previous article Next article >>
.