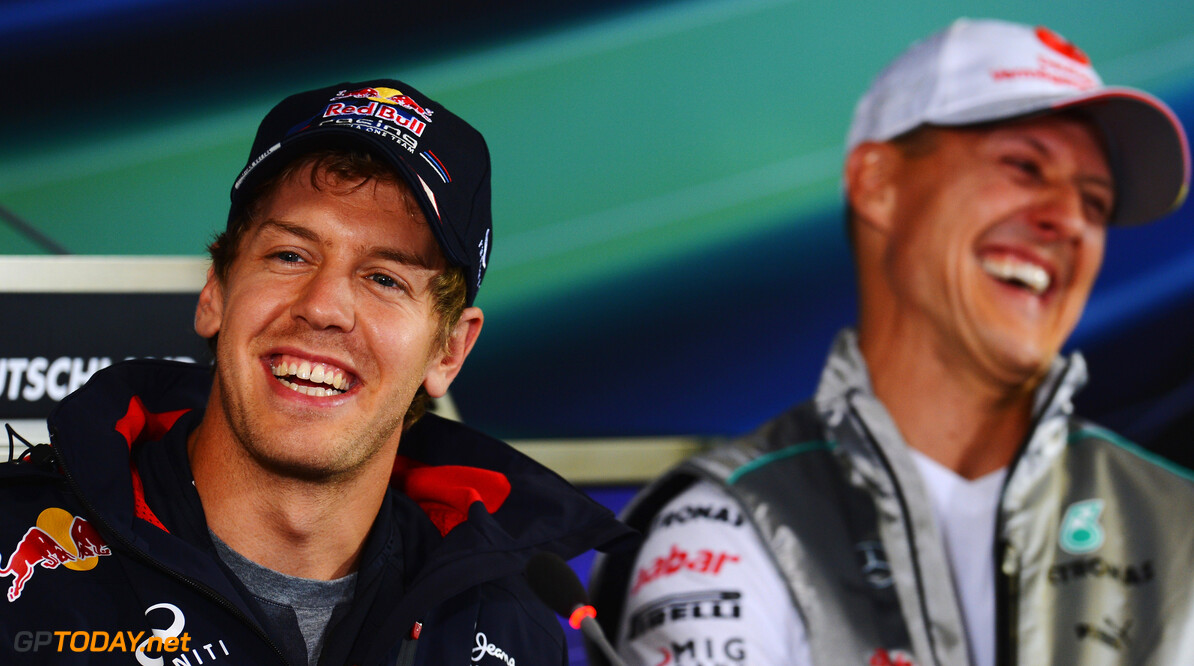 Schumacher not 'the reference' at Mercedes - Vettel

Nico Rosberg has undoubtedly had the measure of Michael Schumacher since the seven time world champion returned to the sport in 2010. That is the reluctant view of Sebastian Vettel, the reigning world champion who is so close to Schumacher that the German press still often refers to him as 'Baby Schumi'.

Throughout most of Schumacher's initial 16-year formula one career, the great German utterly dominated the sport, becoming its most successful driver ever and always standing tall over those at the wheel of sister cars. But since returning with Mercedes in 2010, it is teammate Nico Rosberg who has shone the brightest in the silver cars, with Germany's Sport1 pointing out that the younger German has beaten Schumacher in qualifying 36:13. And in the races, the Rosberg-to-Schumacher points ratio is 308:177, the 27-year-old scoring 5 podiums to Schumacher's single top-three finish, while Rosberg has a pole and win.

Vettel has to admit that his friend and mentor has been outshone. "On the one hand you can say that Michael has forgotten nothing and is clearly not struggling, which he has proved very often," the Red Bull driver is quoted as saying. "But Nico has done an awfully good job and has usually been the reference (at Mercedes)," Vettel acknowledged. "There's no way of talking around it," he admitted.

Nevertheless, it is strongly rumoured that 43-year-old Schumacher will sign on to remain alongside Rosberg beyond his 2012 contract. Mercedes chief Norbert Haug recently said he doubts "there will be an announcement at Spa" next month, which was widely interpreted as a clear sign that an announcement of a new deal will be made eventually.

Team Ross Brawn is hinting similarly, telling F1's official website this week that Mercedes' current driver lineup is working well. He said Schumacher and Rosberg are "very professional, very committed, good attitude, speed, work very well in the team, work well together as a pairing - which is not always easy with drivers - and I believe both are more than capable of winning races if we provide the equipment."

So why the delay in signing off Schumacher's 2013 contract? "I think this is a very important decision for all the people involved," said Brawn. "We won't be rushed on the decision and when the time is appropriate we will announce what we are going to do. I don't want to increase speculation by commenting on where we are." (GMM)
F1 News Nico Rosberg Sebastian Vettel Mercedes
<< Previous article Next article >>
.