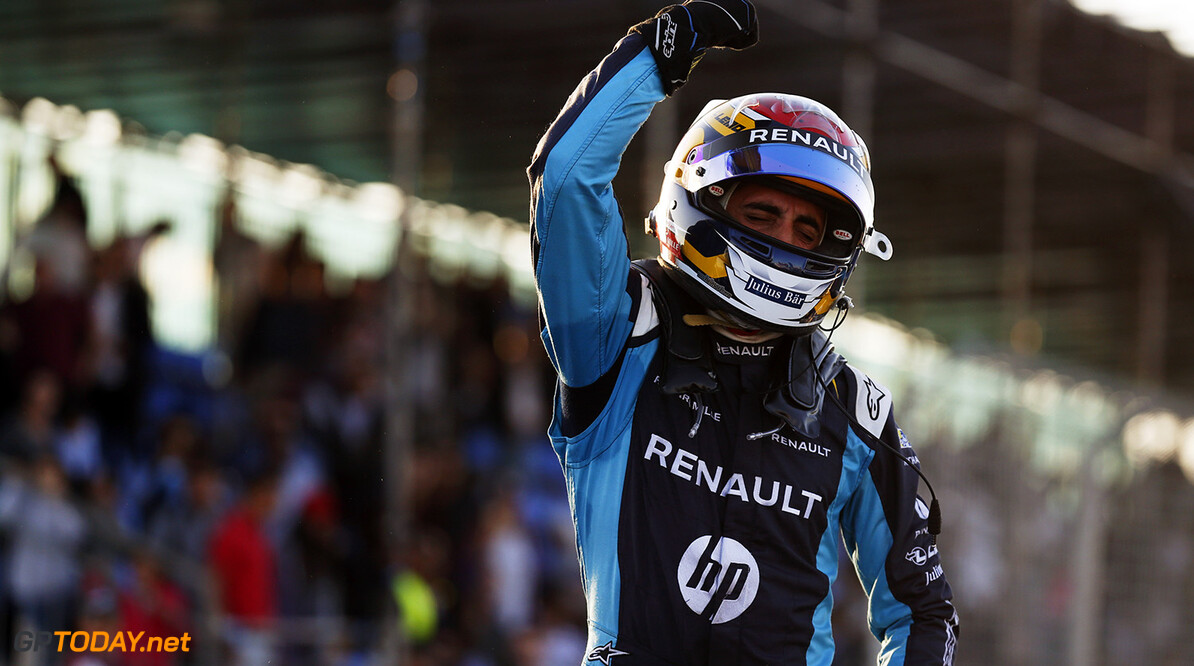 Sebastian Buemi comfortably won the Buenos Aires ePrix, taking the lead early on in the race to control the pace and take the chequered flag.

Buemi finished ahead of Jean-Eric Vergne who finished the race from the same position he started in. Lucas Di Grassi, who started from pole will surely disappointed that he couldn't convert it into a win, as he finished third.

Fourth was Nico Prost in the Renault e.dams, ahead of season one champion Nelson Piquet Jr, and Loic Duval in sixth.

German Daniel Abt put in a good performance to finish seventh, ahead of Jerome D'Ambrosio in eighth. Oliver Turvey crossed the line in ninth and taking the final point was local hero Jose Maria Lopez.

Lucas di Grassi made a good start from pole position, extending a lead behind him while all the other racers squabbled for position, with a lot of bumping and grinding. A full course yellow was emitted when it came to realisation that Adam Carroll in the Jaguar failed to get away from the grid.

When the full course yellow was taken away, the field once again got back to racing, with Mitch Evans overtaking Jerome D'Ambrosio. Almost immediately after that overtake, Jean-Eric Vergne took the lead from Lucas di Grassi, with Buemi also taking advantage of the struggling Brazilian to take second.

Lap 5 saw Nico Prost overtake Nelson Piquet for fifth, who was struggling with his car. Buemi hunted down and overtook Vergne to take the lead of the race. Di Grassi was struggling after being overtaken twice in quick succession, and his day got worse when Oliver Turvey overtook him for the final spot on the podium.

Sam Bird then emerged with a problem and had to return to the pits on lap 8, while Loic Duval managed to get by Stephane Sarrazin. The winners of the FanBoost were announced, with Buemi, di Grassi and Abt taking the fan's vote.

Maro Engel was then spotted off track but managed to keep going. Nico Prost pulled a move to get by di Grassi to move up into fourth position. Engel's troubles continued and was forced to retire, and at this stage, Buemi was leading Vergne by 4.4 seconds.

On lap 18, Turvey was the first to pit from third position and change car, but dropped to sixth after all the stops were made. Evans was handed a five second penalty for speeding under the full course yellow that was out on lap 1.

Di Grassi was lucky not to collect Piquet as the former emerged from his pit box right in front of the Brazilian. Felix Rosenqvist, who had before been racing well, had a problem starting his second car and dropped right down to seventeenth upon emerging from the pits.

Loic Duval then overtook Evans for seventh, while di Grassi seemed to be much more comfortable in his second car, as he got by Prost for third.

Di Grassi began to chase down Vergne in a hope to get back into contention for the lead, and was cutting into the gap nicely. D'Ambrosio then overtook Evans for eighth, and it seemed like Jaguar's first points of the season were slipping away.

Sam Bird set the fastest lap in an attempt to salvage points, as he dropped out of the running early on due to a problem. The race came into it's closing stages, and it transpired that di Grassi was under investigation for the unsafe release with Piquet. However, no penalty would ensue.

Lopez overtook Robin Frijns for eleventh, as the Argentine gave his local fans something to cheer about. Faraday Future Dragon team mates Duval and D'Ambrosio were side by side for a number of corners on the final lap, before Rosenqvist set the fastest lap to secure three points.

Sam Bird ended his race on the final lap, not by crossing the line, but by hitting the barrier at turn 4. Moments later, Buemi crossed the line to take victory, making it three wins from three and extending his lead in the championship.