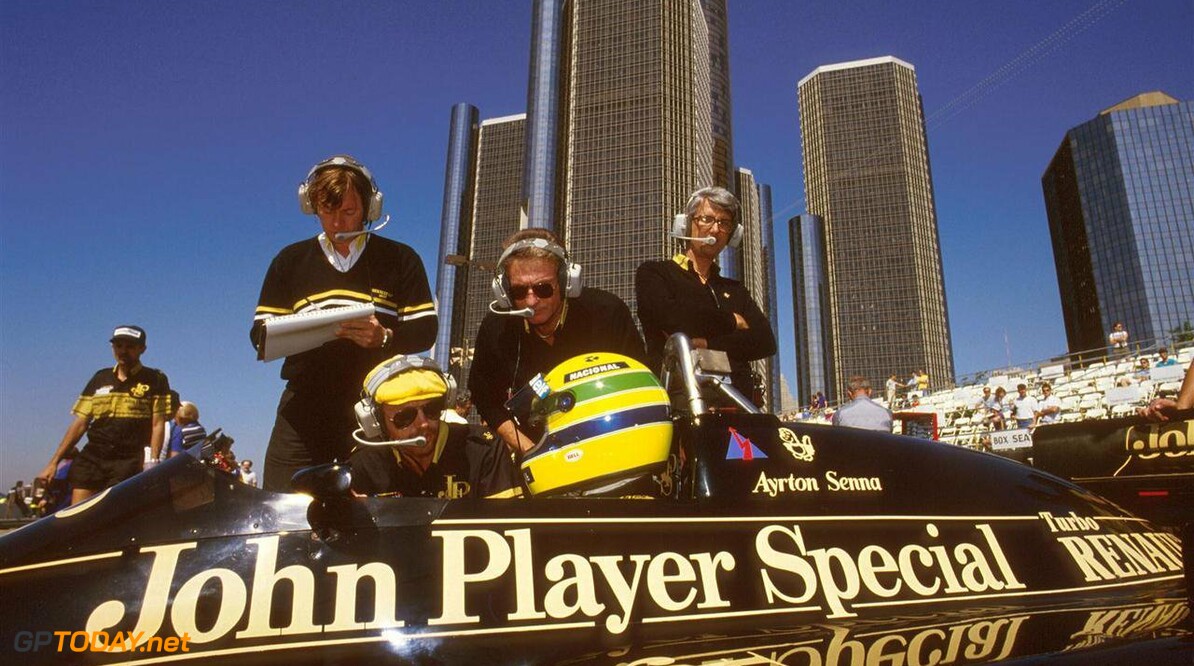 Ayrton Senna Special: Part 21 - Second year at Lotus - A good start and the lead in the championship after Detroit (1986)

After the victory at Jerez, Ayrton travelled to San Marino as the championship leader for the third round of the world championship. Ayrton, who started from pole, had to let Piquet past, and settled in second place until he dropped out on the 11th lap with a broken wheel bearing. Exactly the same thing had happened to his teammate Johnny Dumfries. The British rider was again four seconds behind in qualifying.

The race at Monaco went better. After qualifying in third place Ayrton took Nigel Mansell at the start and drove behind Prost through the tunnel. It was the only time Ayrton could try to pass the McLaren. Prost drove further away lap by lap and behind, Ayrton came under pressure from Nigel Mansell and Keke Rosberg, who started in ninth place.  At the start of the 27th lap Rosberg caught up with Mansell. Mansell then decided to perform a tyre stop.

Rosberg then put pressure on Senna, who initially closed the gap to him. Then Rosberg decided to go into the pits. After a stop of 13.20 seconds, Rosberg left the pits. Two laps later Alain Prost entered the pits and Ayrton took the lead in the race. On the 41st lap Prost had closed the gap to Ayrton and decided to attack on the straight. Ayrton kept to the middle of the track. "Senna is going to play the blocking game, but can't keep Alain behind him forever", James Hunt remarked during the report. Hunt was partially right, Ayrton decided to pit and after 10.28 seconds he drove away again. Rosberg took over second place. Now Ayrton and Nigel Mansell were after him. The Brazilian had newer tires and could easily finish. But for the rest of the race, Ayrton decided to go safe and finished in third place.

A second place at the Spa-Francorchamps circuit behind Nigel Mansell was a good performance. Ayrton was seen as the cause of the starting accident between Gerhard Berger and Alain Prost. At the start, he cut the La Source hairpin from the outside. Piquet, who had taken the lead in the race, was hit with a problem with the turbo. Mansell had passed Ayrton and won the race with a 19.827 second lead.

In Canada, Ayrton finished fifth after starting from the front row. Ayrton was able to keep up with Nigel Mansell's pace in the first lap, but in the early stages of the race he lost a number of positions due to the poor handling of his car. After six races he was second in the championship on the same number of points as Nigel Mansell and two points down on Alain Prost. Nelson Piquet was fourth. It was clear that the title fight would focus on these four drivers.

A pole position on the Detroit street circuit should be the basis for a 'relatively easy' race. But nothing could be further from the truth. While Ayrton drove to the fastest time in qualifying for the fourth time this year, things turned out to be different in the race. In comparison, teammate Johnny Dumfries was again four seconds slower. After seven qualifications, Dumfries was 27.776 seconds behind his teammate. Was Ayrton right in saying that Lotus couldn't build two competitive cars? It became painfully clear that Dumfries could never get near the Brazilian. Elio de Angelis, who died in a test at Paul Ricard, could still regularly stay ahead of the Brazilian.

Prior to the race, Ayrton said the following: "It will be a tough race. I expect Williams and McLaren to be very strong here, especially at the beginning of the race. If I can manage to run away in the first ten laps of the race it could be interesting for me." Ayrton then indicated the tyre situation: "I think I might only have to stop once. Maybe I don't have to stop at all, we haven't decided anything yet." Mansell was determined to win three times in a row, and when asked if he could beat Ayrton Senna he said: "It will be difficult. This circuit is difficult for the car. It's very hot but I keep my fingers crossed on a good race."

At the start, Ayrton stayed ahead of Nigel. On the fourth lap, Mansell caught up with Ayrton on the straight. At the exit of the tunnel, Mansell passed Ayrton. Arnoux immediately followed on the straight. The Lotus ha good temperature and started to build up a lead. After 14 laps Ayrton was 6.5 seconds ahead of Rene Arnoux. Mansell's lead had started to decrease. Suddenly Ayrton came in the pits. He had a flat tire and rejoined the track in eighth place.

Jacques Laffite had taken the lead in the race. In the twentieth lap, there were two Ligiers in the lead. Mansell was third and Prost fourth. Behind these four were the Brazilians Piquet and Senna. Senna had already passed Johansson and Alboreto by now. After pit stops by Lafitte, Arnoux, Mansell and Prost, Ayrton was in second place behind Nelson Piquet. After a pit stop by Piquet, Ayrton was back in the lead. Because the Williams pit stop lasted too long, Ayrton decided to go for a second tyre stop and came back on the track well before Piquet past.

Both Nelson Piquet and Rene Arnoux wouldn't make it to the end of the race due to a crash. After 63 laps Ayrton was the first to see the flag. Jacques Laffite finished just ahead of Alain Prost. Nigel Mansell's Williams finished fifth. It was the 77th victory for Lotus in Formula 1. "I'm standing here with the Brazilian flag", Ayrton said. "I stopped during the in-lap because I saw someone with a Brazilian flag." Ayrton then answered if the choice for two stops was planned: "I had a flat tire and therefore I had to stop early. Something ended up on the tire. I didn't hit a wall and didn't drive over anything. Very strange", he concluded the answer. Prost was also satisfied: "I'm happy with my ten points in Canada and Detroit. These are two difficult circuits."