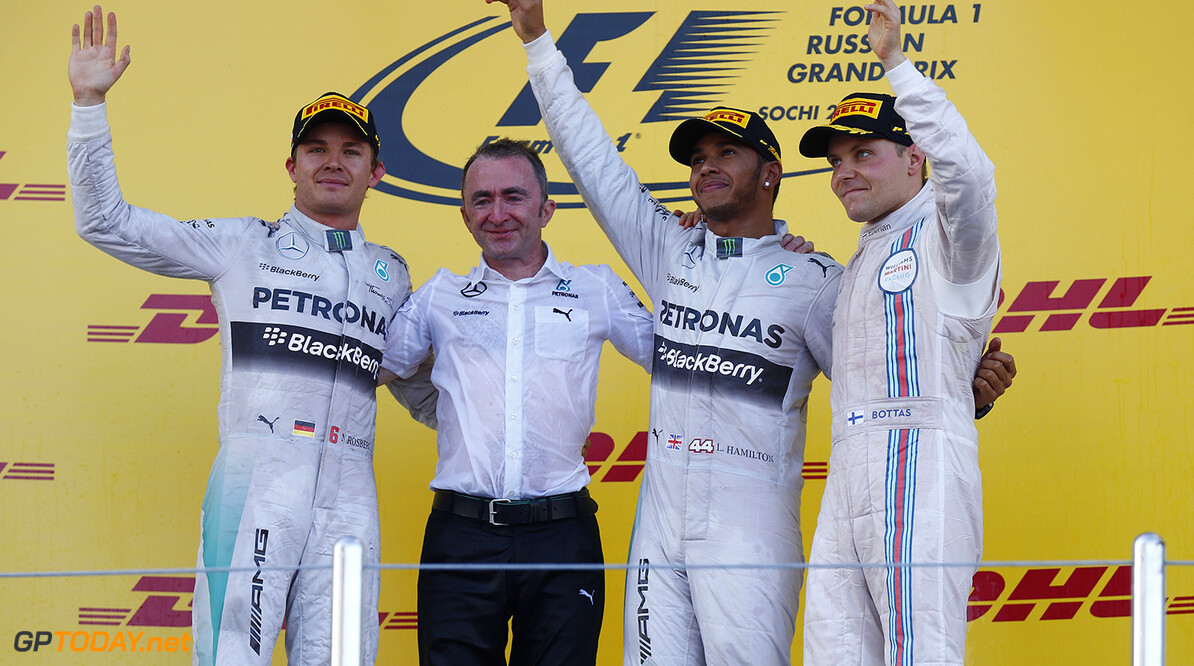 The past two days have seen celebrations at Brackley and Brixworth as the team commemorated the first ever FIA Formula 1 World Constructors Championship title for Mercedes-Benz in a landmark year for the marque. 60 years have passed since the three-pointed star took victory in its first ever Formula One Grand Prix in Reims, and 80 years since the Silver Arrows were born at the 1934 Eifelrennen. In the year that Mercedes-Benz has celebrated 120 years of motorsport achievement, the 2014 campaign stands as a fitting tribute to the impeccable standards of success established in years gone by.

With 13 wins, 35 podium finishes, 16 pole positions and 14 fastest laps from 16 races, the Mercedes-Benz PU106A Hybrid Power Unit has taken 64% of all available World Championship points thus far in 2014, leading 88% of racing laps in the process. Meanwhile, the Mercedes-Benz F1 W05 Hybrid has taken 34% of points available, leading 85% of racing laps.

Across the two days, drivers Lewis Hamilton and Nico Rosberg and senior management have visited both factories - addressing the masses, congratulating team members as a group and individually, and joining in with the celebrations:

Niki Lauda, Non-Executive Chairman, Mercedes AMG Petronas Formula One Team: "I'm very happy to stand in front of everybody here today. Many years ago, I was fighting as a racing driver to achieve a World Championship. You win one race, you lose another, you keep going until one day you are World Champion. On the evening I became World Champion I thought I hadn't done a bad job, as I had driven the car to the title. Standing here today, however, is a totally different experience. Every one of our people can now call themselves a World Champion - and that is because they have all worked together as a winning team. We have three more races and we must keep on pushing to make sure our drivers have an equal chance to win their title. Then, we must push even harder to keep winning year after year - and it will only get tougher. But I believe we have the people to do that. It's a great achievement."

Toto Wolff, Head of Mercedes-Benz Motorsport: "What a moment. When I was driving to the factory after Russia I remembered when I first joined the team, how inspired I was by everybody I met. Not a day has passed since that I don't walk through the factories and feel the same inspiration. We have such an intelligent, hard-working group of people. Winning the very first Constructors' Championship for Mercedes-Benz is a moment of immense pride for all of us and this the moment to recognise everybody involved in that team effort - starting with Ross Brawn, who was an inspiring figure at the team and laid the foundations for our current success. I thank each and every one of these great people for their involvement in what we have achieved and raise a toast to their efforts - the best of the best."

Paddy Lowe, Executive Director (Technical): "Getting a one-two finish in Russia was the perfect way to wrap up what I hope will be the first of many Constructors' Championships for Mercedes-Benz. It's fantastic to be a part of this great team and I think we have all the ingredients to continue this success. My congratulations go to everyone at Brackley and Brixworth for the tremendous effort they have put in to achieving this."

Nico Rosberg: "So this is it - we're actually standing here now as World Champions! This has been a long time coming. Since I joined at the start of this project back in 2010 I expected this day to come as I've had such strong belief in this group of people from right back on day one. To be a part of that and to have finally achieved this Championship in such dominant fashion is a great feeling. I'd like to say a big thank you to everyone for all their hard work. I hope they can really enjoy this moment, that there will be many more great moments to come and that this is just the beginning of a long era of success for the Silver Arrows."

Lewis Hamilton: "I'm actually speechless at this moment. What an incredible feeling it is to be stood in front of all these incredible people. You almost have to take a step back and just think about what we've achieved together. I know it's been a long road and many of the team have had to work through tough times to lay the foundations for what we're seeing today am I'm incredibly grateful for all of their hard work. These past two years have been the best of my life - and that's all down to everybody standing here today. The effort and the synergy here is unlike anything I've ever seen and I'm excited for the future."
F1 News Lewis Hamilton Nico Rosberg Mercedes
.