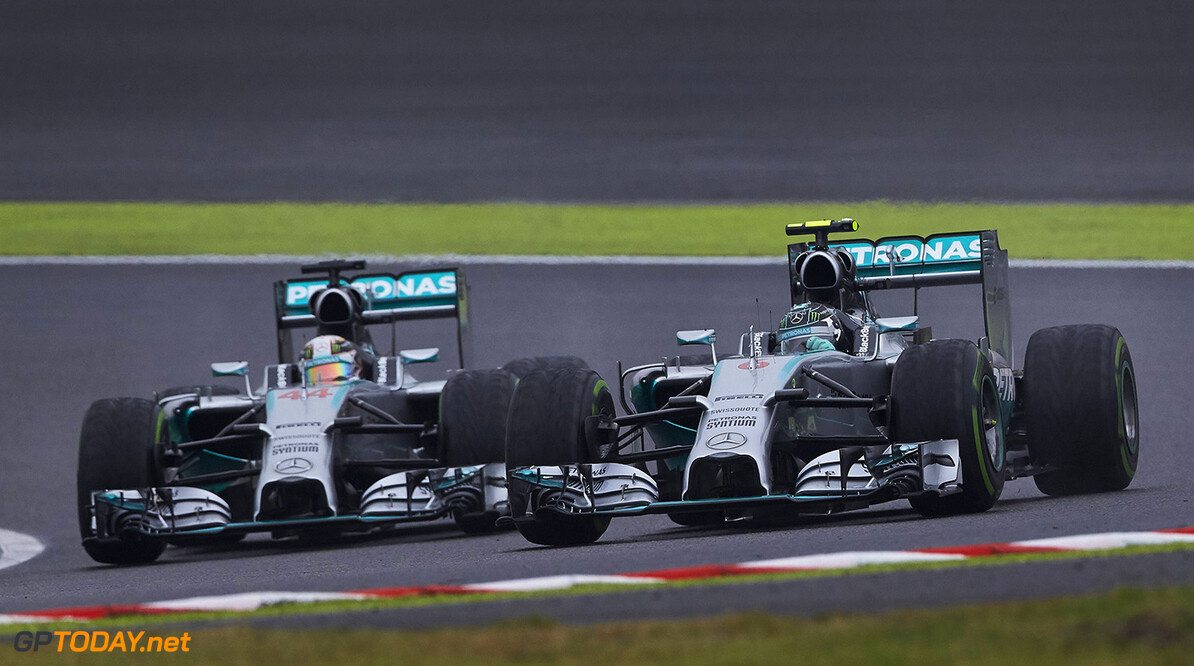 Lewis Hamilton: "It's difficult to know what to say after a weekend like the one in Japan. As I crossed the line, obviously I was pleased to have finally won at Suzuka - but as soon as we got back to the pits and heard what happened to Jules it suddenly didn't seem relevant anymore. My thoughts and prayers are with him and his family. This weekend is a new experience for Formula One as we head to Russia for the first time. I like a challenge and a new circuit always provides that. Of course, we've run through plenty of laps on the simulator - but you never really know what it will be like until you get out there and feel your way into the track. I'm looking forward to seeing what it's really like and how our car performs there. It felt great in the race in Japan and I'm sure it will be strong again in Sochi, so I'm hoping to keep up this run of results that we've built in the last few races."

Nico Rosberg: "My first thoughts at the moment are always with Jules Bianchi and I really wish him, his family and his colleagues all the very best at this difficult time. The weekend in Japan brought a good result for the team but we came away from the race with only one thing on our minds - the well-being of our colleague Jules. Looking ahead to this weekend, it's exciting to be going to the first ever Russian Grand Prix. Formula One has never raced in Russia before, of course. But we did actually do a demo in Moscow a couple of years ago where I drove round the Kremlin, which was really cool. Everybody was really into it - all the Russian fans - so I think there will be a lot of people coming to watch us. It's a new circuit, so we've spent a lot of time in the simulator practising it to learn all the lines and the gears as best we can before going there, which will be important when we first hit the track. I'm looking forward to what I'm sure will be a great first year for Formula One in Russia."

Toto Wolff, Head of Mercedes-Benz Motorsport: "I think the whole paddock left Japan feeling numb after what happened at the end of the race on Sunday. I know I speak on behalf of everyone at Brackley, Brixworth and Stuttgart when I say our thoughts are with Jules and his loved ones. As we head to Russia for the first time, what should have been the excitement of exploring new territories for the sport has been overshadowed by the events of Suzuka. The new circuit in Sochi looks impressive and, if we think back to the Winter Olympics, I am sure we will see an event the country can be proud of, with many new fans turning out to see our sport's debut race in Russia."

Paddy Lowe, Executive Director (Technical) : "First of all, both my thoughts and I'm sure those of the entire team are with Jules Bianchi, his family and our colleagues at Marussia. Suzuka may have seen a strong performance for us, but really that pales into insignificance in the wake of Sunday's events. We all hope for some positive news soon. Now, we head to the inaugural Russian Grand Prix which is an exciting prospect for the sport as a whole. Coming to a new circuit such as Sochi provides an interesting challenge for every team. Although we conduct extensive work in the simulator to prepare as best we can, the weekend will undoubtedly be a steep learning curve for everyone involved. Track evolution will be a big factor, as demonstrated most recently at another brand new venue in Austin two seasons ago. This is part of the challenge of Formula One - and one we all relish. It will be fascinating to see how the relative performance of both the cars and drivers evolve across the weekend and we could be set for a highly entertaining race. We certainly hope that this is the case and that we can put on a good show for the Russian fans at their first home Grand Prix."
F1 News Lewis Hamilton Nico Rosberg Mercedes Marussia
.