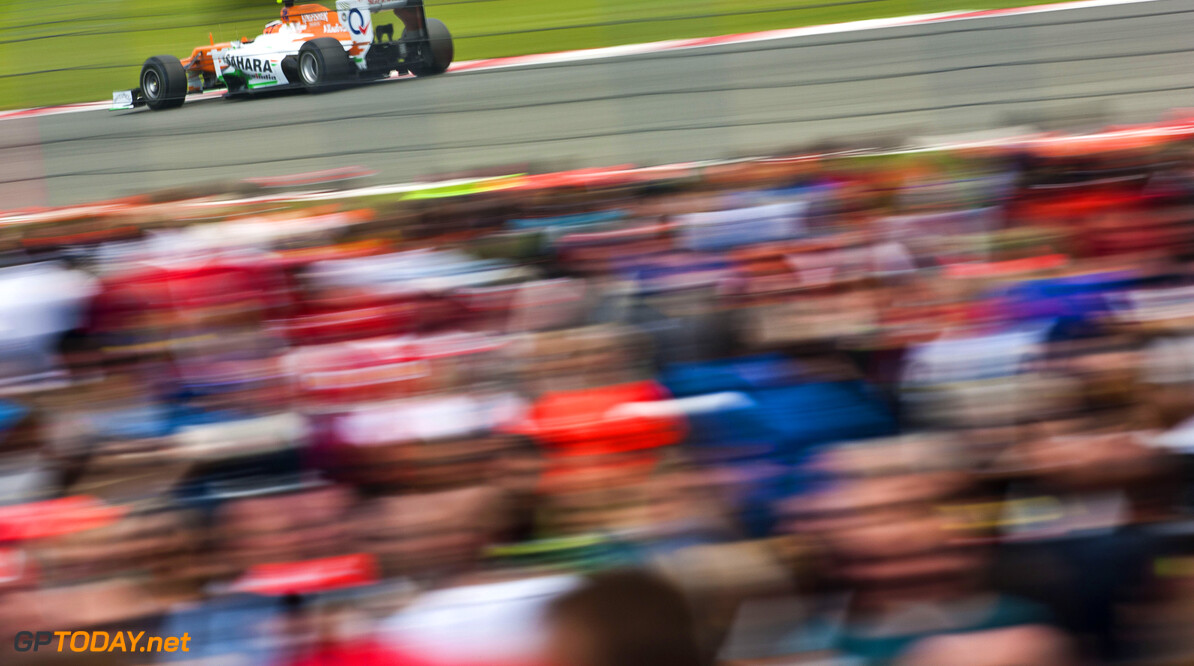 After a challenging local race at Silverstone, Dr Vijay Mallya sums up the mood in the team and looks forward to a competitive showing in Hockenheim.
How would you sum up the British Grand Prix weekend?
Mallya: "It was certainly frustrating that we didnt score points at Silverstone. We were really hoping to put on a good performance and were targeting a double points finish. The weather definitely played its part on Friday and Saturday, so we really couldn't predict accurately what to expect for Sunday. One car was set up for the wet and the other for the dry."

How disappointing was it to see Paul retire so early from his home race?
Mallya: "The conditions would have suited Paul, who had the dry set-up. Unfortunately he made contact with Grosjean and that was the end of his right rear tyre. You have to expect things like this in F1, but it's always disappointing when it happens to you."

Nico nearly made the points  it must have been very frustrating to see him fall back right at the end
Mallya: "Nico did very well, although I wish he could have hung on to ninth. The bottom line is we followed a hard-hard-soft strategy. In the last stint we asked the soft tyres to last 17 laps and Nico was under pressure to defend his position. It was a combination of tyre degradation and Nico making a slight error when he locked up the rears. I guess Alonso lost his lead to Webber because he followed the same strategy and clearly the hard tyres were better at the end of the race. Anyway, there was a lot to learn and once again the unpredictability of the tyres played a very important role. We will come back in Germany with a greater sense of determination."

You must take encouragement from seeing both car running strongly in the top ten once again?
Mallya: "It's satisfying to see that we are consistent top ten performers. We need that little bit of extra luck to get on the podium. Having said that, our immediate competitors didnt have too much luck either  Perez and Maldonado were both going well, but they didn't score. Sauber didnt get any more points to increase their lead over us. We are still only three points adrift of Williams and 16 behind Sauber, so we have reasons to be optimistic going forward."

F1 has not raced at Hockenheim since 2010, so there's no Pirelli knowledge and perhaps a bit more uncertainty
Mallya: "Yes, it's wide open in that sense. It's also Nicos home race. We have no time to take things easy. We have to take every race very seriously, with the same intensity and do everything we possibly can to earn more points."

Nico Hulkenberg gets set for his home race.
Nico, tell us what it means to be racing at home this weekend?
Hulkenberg: "It's always a bit more special and it's nice that I only live one hour away so I don't have to catch a flight! The fans always support the race and help produce a good atmosphere, especially in the stadium section at the end of the lap. It's fair to say that Michael and Sebastian are the main attractions, but the fans always show their support for all the German drivers."

What memories do you have of racing at Hockenheim?
Hulkenberg: "It's where I had my very first car race in 2005 when I raced Formula BMW  and I won both races that weekend. Since then I've raced there a lot in Formula 3 and I also raced there in Formula One with Williams in 2010. Its a track I know very well and I enjoy the layout, although its a relatively short lap."

Tell us about the main challenges?
Hulkenberg: "I think the most challenging corner to get right is turn one. It's a quick right-hander that we take at well above 200 km/h and there is a tricky curb on the exit. Another important part of the lap is getting the hairpin right. If you get your braking wrong its easy to run wide and it's the main opportunity for overtaking."

Paul Di Resta reflects on Silverstone and looks ahead to racing in Germany.
Paul, a short home race for you in Silverstone  how do you feel looking back on the weekend
Di Resta: "It was a shame to end the race so early, but there's no point getting frustrated. It could have been such a good race because we had taken an aggressive approach with a dry set-up on Saturday and I'm sure we could have come away with points. The contact with Grosjean was very slight and just one of those racing incidents, but it was enough to cut the tyre and that completely ended my chances."

You've spent a lot of your career racing in Germany  what are your thoughts on Hockenheim?
Di Resta: "I know the track well from my days in the DTM and I am looking forward to getting out there in a Formula One car. It's a fun circuit with some challenging corners and its good for overtaking, especially the slow hairpin at turn six. My favourite part of the lap is the stadium, where you can really feel the energy of the crowd. The double right hander onto the start/finish line is another special corner and its difficult to get it right. If you have lots of experience on this track you can gain a little bit of time through this corner."
F1 News Pirelli Williams Sauber
.