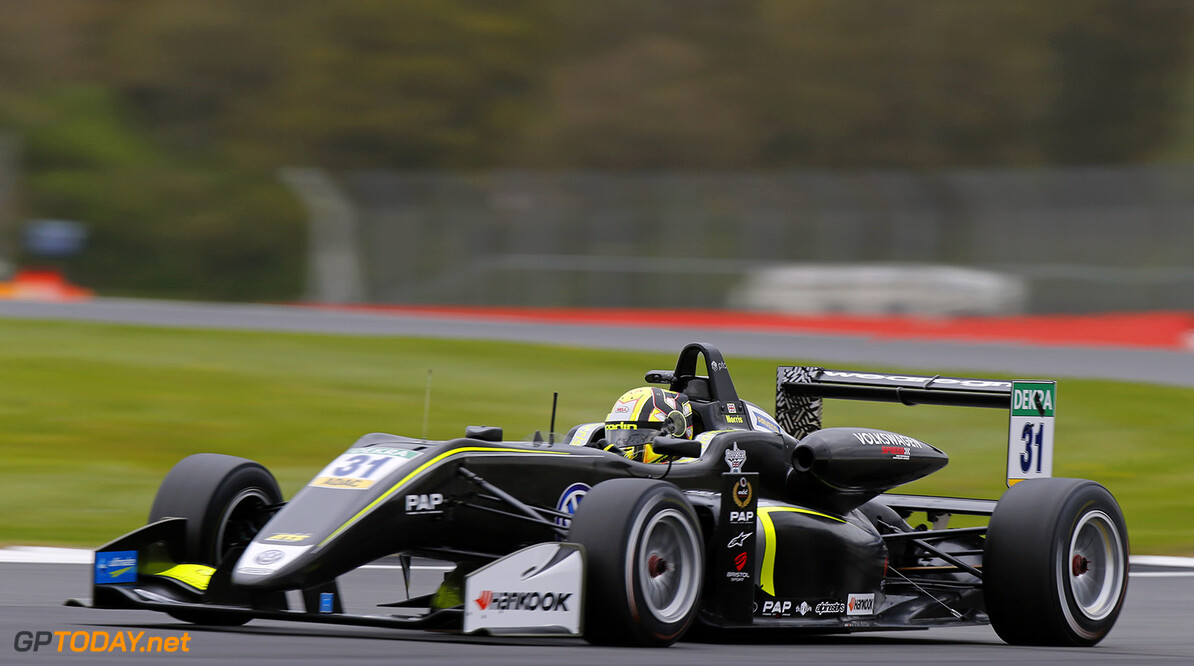 Carlin's Lando Norris took his third win of the 2017 F3 European Championship season at Monza on Saturday morning, after both a troublesome start and a very close pursuit of his team-mate Jehan Daruvala, who eventually had to settle for second.

The Briton started alongside polesitter Daruvala on the grid, but any hopes he had of immediately jumping into the lead were dashed when he bogged down. This allowed another Carlin driver, Jake Dennis, to pass him from third as Daruvala kept his lead up ahead. As he led the field into the second chicane, Norris was unable to make the turn behind him and cut across, allowing the fourth Carlin of Ferdinand Habsburg to easily take third.

Norris soon got this back on lap 2, and there was more drama at the front on the following lap when Dennis got a tow behind Daruvala on the main straight, giving him an opportunity to pass into Turn 1. He overshot, giving Daruvala some breathing space and returning second place to Norris.

The top six was rounded out at this stage by championship leader Joel Eriksson, who had so far been unable to make much of an impression, but the significant gap to seventh allowed him to focus on attacking those ahead.

Callum Ilott had set the fastest lap for Prema, meanwhile, and was on a charge looking to pounce on Habsburg, who was fourth. He managed to do so on lap 4, and despite the Austrian's attempts to reclaim the place he was able to defend it.

At the edge of the top ten, a fierce battle was raging between the other three Prema drivers - Guanyu Zhou, Mick Schumacher and Max Gunther - and the Hitech of Nikita Mazepin, who ran wide at the Parabolica as he tried to defend ninth. It looked like the stewards would be taking action on those who left the track very soon.

Dennis retook second from Norris on lap 5 as Daruvala extended his lead to six tenths of a second, and Ilott soon passed him as well, although he could not hold the position for long as his car began to fade. Habsburg took fourth from him on lap 7, and was now behind third-placed Eriksson, who was finally starting to advance through the field.

Lap 8 saw Pedro Piquet become the latest driver to leave the track thanks to contact with Joey Mawson at the second chicane, bringing Ralf Aron into the points and handing Mawson a drive-through penalty.

On lap 11 Mick Schumacher was warned about track limits as Ilott ran wide ahead of him and he came under pressure from Zhou for seventh. Norris had closed to within 1.5 seconds of Daruvala in the lead, and the gap had shrunk even further by lap 13, when he was 0.9 seconds behind. He got a tow on the next lap to be right on the Indian's gearbox, and the two would remain close for the rest of the race.

Lap 16 saw Daruvala finally lose the lead to Norris, although the win was not yet in the bag for the Briton. With Ilott having slipped back to P6 due to a pass from Schumacher, he was out of contention for a podium place, and the last spot on the rostrum was eventually taken by Habsburg after a spin from Eriksson.

Norris held the lead to the flag, but victory was only assured at the Parabolica when Daruvala ran wide. They finished ahead of Habsburg in third, with Eriksson fourth. Zhou took an excellent fifth ahead of his team-mates Schumacher and Gunther, whilst Aron was eighth with Ilott ending up ninth. Aron rounded out the top ten, and he was followed home by Mazepin, Tadasuke Makino, Marino Sato and Mawson, whose race was compromised by his penalty. Harrison Newey was the last finisher, having failed to move forward from his last-place grid slot, whilst Keyvan Soori, Pedro Piquet, Jake Dennis and David Beckmann were all retirements from the race.