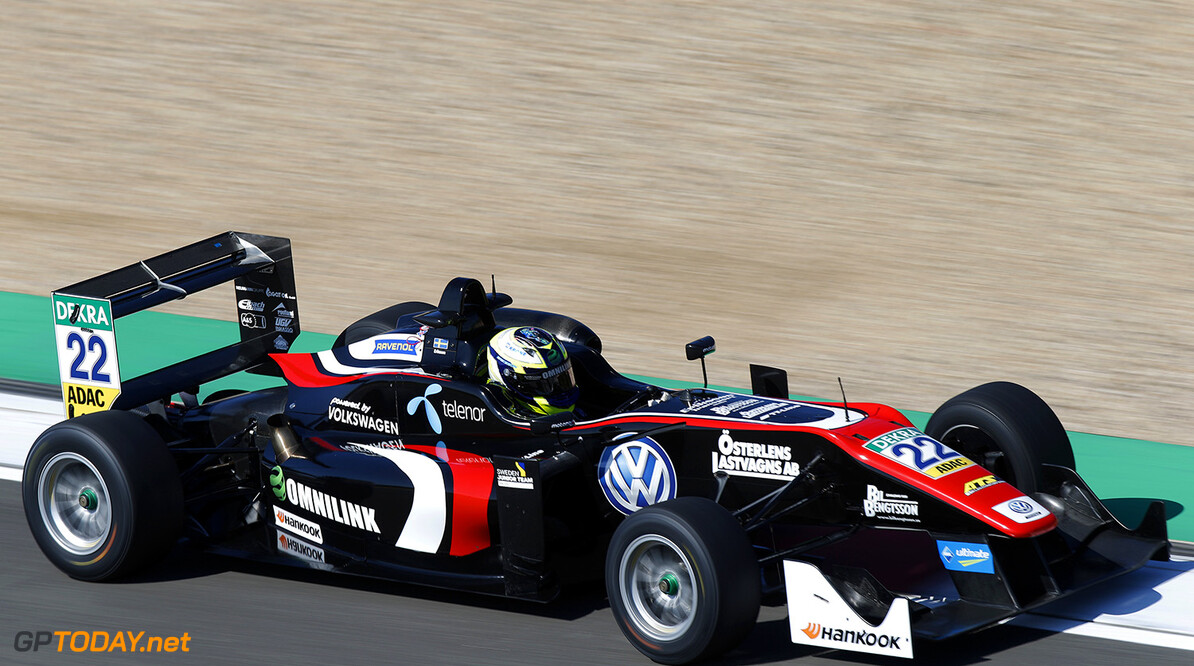 Race 2 of the FIA F3 European Championship got underway at a dry but windy Silverstone on Saturday morning, and it saw Joel Eriksson take the win for his Motopark team, as Race 1 winner Lando Norris faltered - eventually crossing the line in ninth place.

As the lights went out, it was polesitter Callum Ilott who made the best start in the #53 Prema car, keeping his lead into the first corner as Norris, who had started beside him on the front row, lost out and slipped to sixth. Meanwhile, Jake Hughes jumped to third place from fifth on the grid for Hitech as Eriksson took advantage of Norris' misfortune to take second, challenging Ilott for the lead.

The Swede eventually took it with a move at Brooklands, and he would stay in that position for the remainder of the race, never relinquishing it at any point. By lap 4 he was pulling away and had set a new fastest lap, but further down the field, there was a close duel as Van Amersfoort's David Beckmann fought to defend tenth place - the final points position - from the Force India-backed Carlin driver Jehan Daruvala. Although Daruvala was unsuccessful in his attempts to pass at that point, better things were to come from him later in the race.

By the next lap, Norris - who had dropped a further two places during lap 1 to be eighth - was pressuring Beckmann's Van Amersfoort team-mate Joey Mawson for seventh, but despite being well-positioned for a move he could not make one stick and would have to try again. Another Van Amersfoort driver, Harrison Newey, was now also making his mark on the race, passing Hitech's Ralf Aron as he himself passed Beckmann.

Lap 6 saw the first of many warnings given by race control regarding track limits, and in this instance, it was fourth-placed Max Gunther being reprimanded. Hughes was edging away from him in third, although he would not be able to get close enough to Ilott or Eriksson to advance any further, leaving him very much on his own. The next lap saw Norris under attack from Guanyu Zhou of Prema in ninth - although he would soon escape the Chinese driver when he finally managed to overtake Mawson at Luffield on lap 8.

Mawson was evidently struggling, and he was soon displaced by both Zhou and Daruvala in quick succession. On lap 12, as Ilott found himself only 0.9s behind race leader Eriksson at the front, he was clinging desperately to the final point in tenth as Newey sought to take it for himself. Lap 13 saw Norris on Mick Schumacher's tail for P6, as Hitech's Nikita Mazepin was handed a drive-through penalty behind them for exceeding track limits.

Eriksson began opening up the gap to Ilott at this point, but there was pressure behind the two leaders as Mawson could hold off Newey no longer, conceding tenth, and Jake Dennis pressured Gunther for fourth going into Stowe. The stewards were now coming down hard on those who were straying from the tarmac - Daruvala and Norris were both given black and white flags, whilst Beckmann received a drive-through penalty on lap 17.

Eriksson entered the last lap with a lead of just under 2.5 seconds over Ilott, and the two would hold their positions to the flag, with Hughes finishing third. Gunther was fourth with Dennis fifth and Schumacher sixth, whilst Zhou and Daruvala both passed Norris in the closing stages to leave him ninth. Newey completed the top ten.

Mawson ultimately managed to hold onto eleventh after a difficult race, and he was followed home by Motopark's Marino Sato, Carlin's Ferdinand Habsburg, Aron, Sato's team-mate Keyvan Andres Soori, Mazepin, and Van Amersfoort's Beckmann and Pedro Piquet. Hitech's Tadasuke Makino was nineteenth and last, in a race where all cars finished.