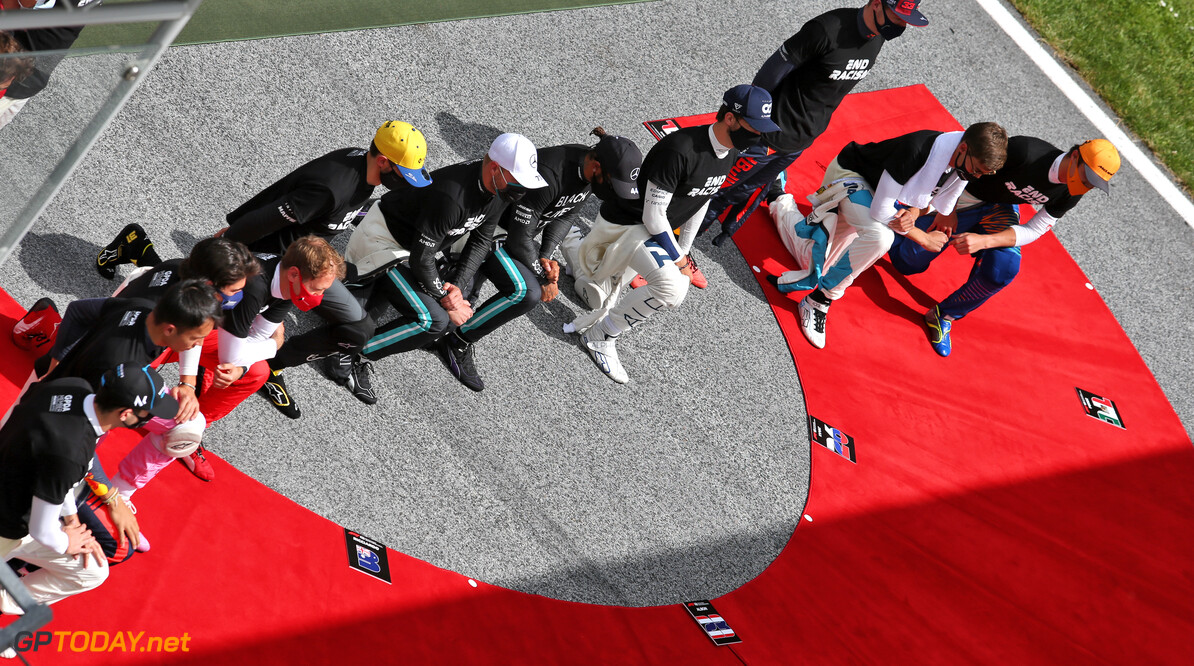 Hamilton: F1 has to do a better job with equality messages

Lewis Hamilton says Formula 1 must collectively do more to improve the 'End Racism' message it sends during grand prix weekends.

On Sunday, drivers once more opted to show a sign of solidarity against injustice and inequality, with a brief gesture underneath the podium before the start of the race.

However, the process was messy, as several drivers were late and didn't know where to stand, before the display was quickly stopped with the start of the national anthem.

Hamilton took aim at Romain Grosjean, a director of the Grand Prix Drivers' Association. Hamilton says the Frenchman “doesn’t think it’s important to do. He’s one of them that thinks it was done once and that’s all we need to do.”

Hamilton added: "I tried to speak to him about what the problem is and it’s not going away and we have to continue to fight for equality.

Hamilton explained that he had been in private contact with Sebastian Vettel, who is also a director of the GPDA, who understands the importance of the matter.

“I think this time he [Grosjean] didn’t mention anything in the drivers’ briefing and neither did Sebastian,” he said. “Sebastian and I messaged each other and he stressed as did I the importance that we continue to do it.

“I think moving forwards we need to speak to Formula 1, they’ve got to do a better job.It was such a rush. Us getting out of the car, running over, quickly doing the knee, they need to do more.

“I don’t know why they’ve only done it for the first race, they did the start, they’ve not done it since then. They’ve come out saying they’re going to be fighting for diversity and end racism but they’re not giving us the platform to continue to do that. It’s all rushed.

"I think they can give us more time, so I’ll probably send an email over the next couple of days, and try and co-ordinate with them because they want to do it, I guess there’s not good enough communication.”

Some drivers have chosen not to take a knee, however Hamilton hopes by the final race of the year, all 20 drivers will have come around to the movement.

“With the other drivers, there’s not a lot I can do,” Hamilton said. "I gave a lot of energy in Austria to try and convince a couple of the drivers, and it’s a battle.

“But I think what’s important is the ones that are doing it, the understanding is fantastic. My dream is that one day the other drivers come around to it and if we get to the last race and we’re all kneeling down and showing that we are united, I think that would be beautiful.”