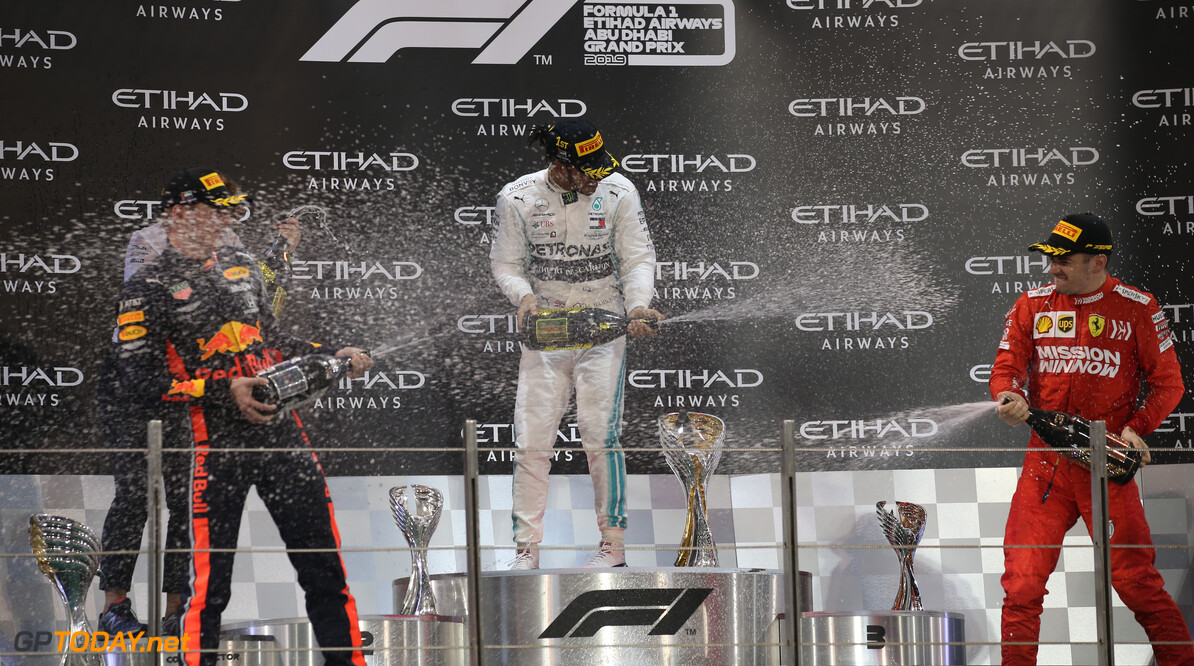 Hamilton ended the year in the perfect way with pole, the fastest lap and the race win. The Brit edged teammate Valtteri Bottas in qualifying and did not put a foot wrong in his domination of the race.

Verstappen drove a solid race, but Mercedes looked like they were out of reach for the whole race. The Dutchman had a bad start and lost a position to Charles Leclerc, but despite engine problems, he was able to come back at the Monégasque driver in the latter stages of the race to reclaim second place.

Leclerc performed well all weekend, out-qualifying his teammate Sebastian Vettel on Saturday and out-racing him on Sunday. However, despite a good start, the Ferrari was off the pace throughout the weekend and unable to mount a challenge for pole or the race win.

It was unfortunate that Bottas had to start from the back of the grid as the Finn was on the pace all weekend. He narrowly missed out on pole position on Saturday and then completed an excellent recovery drive on Sunday to finish in fourth. It is highly likely that he would have scored a podium if DRS was activated at the start of the race as it should have been.

To cap off a season which has not been Vettel's finest, it was another lacklustre performance from Vettel in Abu Dhabi. The German was beaten in qualifying by Leclerc, and then beaten in the race by Bottas who started from the back of the grid. The biggest redeeming factor is his strong pace at the end of the race on the soft tyre, overtaking Alexander Albon for fifth place.

It was actually quite a good race for Albon, who was the only one of the early stoppers from the top six to make it to the end on the hard tyres. He is still lacking on overall pace to Verstappen, but with another encouraging performance, he will hope to start next season stronger than ever.

Perez used the race in Abu Dhabi to yet again prove he is the master of saving his tyres, with the Mexican running very long on his first stint to put him well inside the top ten. He then did well to carve through the midfield in the latter stages of the race to pass Lando Norris on the final lap to finish 'best of the rest' in seventh place.

After looking like he was off the pace of Sainz for most of the weekend, Norris put in a great lap when it mattered in Q3 to start in seventh. The Brit came so close to driving a perfect race before being passed by Perez on the final lap, with the McLaren driver lacking speed on his very old hard tyres.

Kvyat has not had the best time in the second half of the season as the Russian has been outshone by teammate Pierre Gasly in recent races. He had a good weekend though in Abu Dhabi, qualifying just behind Gasly and then driving a solid race to score points for Toro Rosso.

Sainz was, for some reason, off the pace of McLaren teammate Lando Norris in qualifying and the race. However, the Spaniard made an excellent move on Nico Hulkenberg on the final lap to secure sixth place in the championship and finish the year at the front of the midfield.

Ricciardo did pretty well to split the McLarens in qualifying and looked set for some points on Sunday before missing out by the smallest of margins, having switched onto the two-stop to mirror Sainz's strategy.

In what could have been his final ever race in F1, Hulkenberg drove pretty well, sticking to a one-stop strategy in the race. Points looked to be on the cards until a late-charging Sainz and Ricciardo in the last laps overtook him on fresher tyres. Still, a solid weekend from the German.

Alfa Romeo never looked close to challenging the top ten all weekend, and in the race, the pace of Raikkonen failed to mount a challenge on those inside the points. Alfa will be hoping for a much stronger 2019 season, considering the pace the C37 car had at the end of the 2018 campaign.

The chequered flag has finally fallen for Haas, concluding a miserable campaign for the American squad. Abu Dhabi proved to be a struggle for the team, as it didn't threaten or worry its rivals during the race. However, Magnussen's qualifying efforts to escape the Q1 dropzone must be hailed.

Grosjean went with his teammate on Sunday and ran an almost identical strategy, however it was the Dane who came out on top in their intra-team battle. Like Magnussen, Grosjean will be hoping for more things to cheer about when the new season kicks off next year.

Giovinazzi enjoyed noticeable growth throughout the year and proved it again on Saturday by getting the better of Raikkonen in qualifying. His race was a little more difficult, sustaining damage when he made contact with Kubica. But again, the car was unlikely going to make it to the points on merit anyway.

Russell capped off a tough year for Williams by completing the qualifying whitewash on teammate Robert Kubica. In the race, he fell behind the Pole but came back to overtake him and stretch a gap in the second half of the race.

The first corner on race day saw Gasly's grand prix decline, as he made contact with both Racing Points, which resulted in a lengthy drive back to the pits and a slow pit stop. However, that stop, which saw him switch to the hard compound, was his one and only stop of the race. He saw the chequered flag on his 54 lap old tyres.

Kubica's full-time race comeback in F1 has come to a close and while it didn't turn out the way he wanted, there is no faulting his determination. His race in Abu Dhabi wasn't his worst this year, but he was still out-performed by his rookie teammate.

After having a decent showing in qualifying, Stroll was a little clumsy to get caught up in an accident with Gasly on the opening lap, which saw him make an early pit stop and eventually retire from the race.