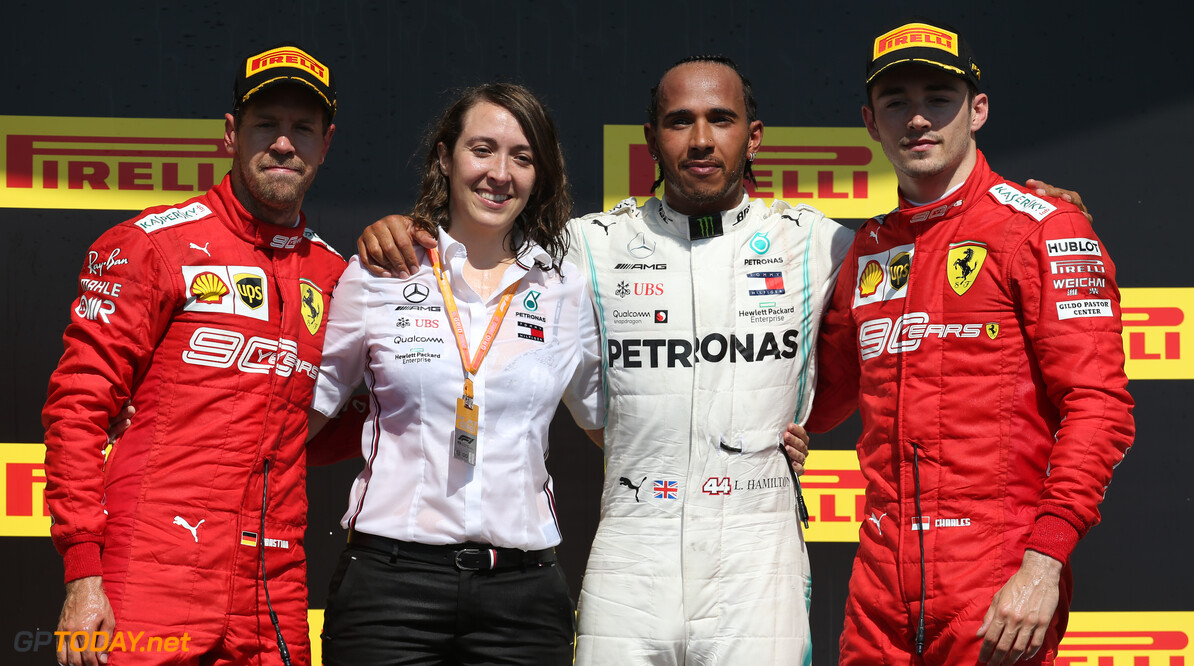 Hamilton did not have the best preparation for the Canadian Grand Prix, as a crash in practice cost him a substantial amount of track time. However, this did not stop the Brit from having a good qualifying in a car that was clearly lacking in terms of straight line speed to the Ferrari's. He then put pressure on Sebastian Vettel throughout the race, which ultimately meant he took the victory. Not the way he wanted to win, but a win nonetheless.

Vettel was having what looked to be the perfect race after a perfect qualifying on Saturday, driving on the limit throughout the 70 laps. However, he did make another error under the pressure of Hamilton, which lead to the penalty and the loss of the race win. Whether or not you think the penalty was deserved, it was his mistake which caused it.

It was a quiet weekend for Leclerc, as although he started strong in Friday practice, his pace faded away when it mattered on Saturday. He then did enough to get his second podium, but it could be argued that not for the first time this season, his race was compromised by Ferrari's strategy. He just missed out on second place after Vettel's penalty was applied, but I think that would have been more than he deserved.

It was a weekend to forget for Valtteri Bottas in Montreal, as he had a terrible time in Q3. The Finn had to abort his first lap in the session thanks to a hair-raising slide at turn three, and then made a couple of mistakes on his final attempt to only qualify in P6. During the race, it was a performance worthy of the Bottas of old, as he fell thirty seconds behind the leaders and struggled to find a way past the Renaults on his way to fourth place.

It is hard to read much into Verstappen's performance during the weekend, as he was unfortunate not to make it to Q3 due to the red flag caused by Kevin Magnussen. However, what we can see is that he extracted as much as he could from his Red Bull to finish in fifth, ahead of his teammate by a considerable margin.

Ricciardo was flawless in qualifying, scoring a fourth place start for Renault with a lap which was not only quicker than what his teammate Hulkenberg could manage but also slightly ahead of Gasly in the Red Bull. The 'Honey Badger' did well to battle with Bottas and Verstappen for some time during the race, and did all he could to defend in an inferior Renault but eventually gave way.

Hulkenberg had a relatively good qualifying, as P7 is still a good result for Renault. However, where the German excelled was in the race as he extended the stint on the soft tyres very well. He looked to be faster than Ricciardo in the race, but was ordered not to try and overtake the Australian in the closing stages to ensure the maximum points haul for Renault.

The excuses must be running short for Gasly at this stage in the season, as he had more than enough time to get acquainted with his Red Bull. He was not only beaten by ex-Red Bull driver Daniel Ricciardo in qualifying, but he finished behind both of the Renault's in the race as well as his teammate Max Verstappen. The Frenchman needs to improve, and fast if he wants to keep his seat.

Although he maintains his 11-race streak of not making it out of Q1, Stroll had a respectable qualifying where he was less than a tenth down on his teammate Perez. The Canadian then drove an excellent race at his home track, and had the pace at the end to overtake Carlos Sainz and keep Daniil Kvyat behind.

Kvyat is showing remarkable consistency for Toro Rosso after his year away from the sport. The Russian had an unlucky qualifying on Saturday, where he was unable to finish his Q2 lap thanks to the stricken Haas of Kevin Magnussen. He then drove a steady race to pick off the McLaren of Carlos Sainz, with an excellent move into the first corner in the final few laps.

Sainz made a mistake in qualifying that left him as the slowest of the timed runners in Q3, behind teammate Lando Norris. In the race, he drove 66 laps on the hard tyres, just missing out on points in the final laps of the race, bringing an end to his streak.

It wasn't the strongest weekend for Perez, who didn't little wrong except lack a bit of pace. The Racing Point car didn't seem best suited to the Montreal race track, but the Mexican will nevertheless be disappointed to miss out on points.

Giovinazzi impressed in qualifying, getting the better of teammate Kimi Raikkonen amid Alfa Romeo's current struggles. In the race, he made a costly error by spinning out - however points were probably not on the cards anyway for the Alfa Romeo squad.

Grosjean was frustrated after his Q2 exit, eliminated when teammate Kevin Magnussen crashed (although he admitted that advancing to Q3 was not likely). He slipped back to last place after Turn 1 when he avoided some mishaps ahead of him, but made up a few places on his recovery drive.

Raikkonen didn't have the pace in qualifying to advance out of Q1, and was running ahead of his teammate in the race before Alfa Romeo opted to pit him a handful of laps towards the end for soft tyres. It failed to produce anything, and the Finn ended up far away from scoring points.

Russell once again out-classed teammate Robert Kubica, getting the better of him in qualifying by a large deficit. In the race, he stayed ahead of a struggling Magnussen in what was a weekend that Williams anticipated would be one of its toughest.

Magnussen described the Canadian Grand Prix as his worst experience in a race car ever as he struggled for pace throughout the race. His weekend was compromised on Saturday though when he had a large shunt at the final corner which not only ruined his own efforts, but his teammate's as well.

Kubica's comeback story is being significantly dampened by not only the fact that the car he's driving is an uncompetitive car, but also because he is being outshone by rookie George Russell. It doesn't lower views on him, as coming back was always going to be a huge challenge. But even he probably expected more than this.

Albon was unlucky all weekend, as his final effort in Q2 was halted after Magnussen's crash, while he was squeezed at Turn 1 which took off his front wing, ultimately ending his race.

Norris drove a nice qualifying and was doing well in the race before a very peculiar issue relating to his brakes and the suspension put him out of the event.