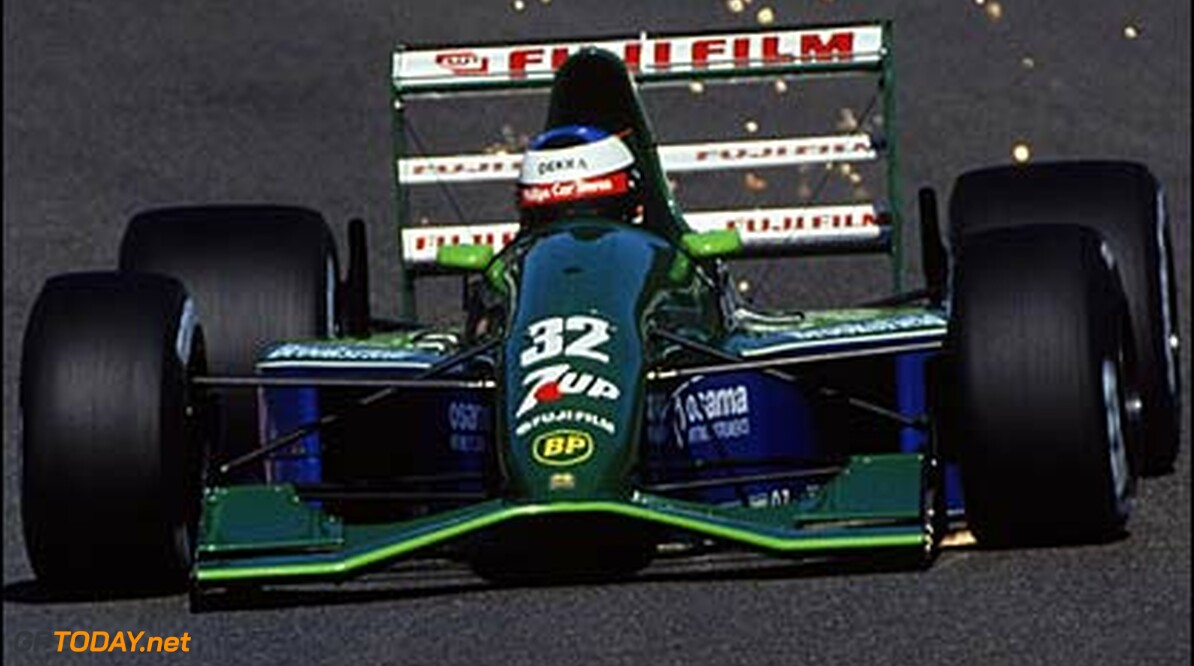 His debut for Jordan

Many think Michael made his debut at Spa on Friday morning during the first free practice session, but this is not true. On Tuesday, August 20th, Michael tested the Jordan-Ford 191 around the Silverstone Club Circuit. The deal was signed just before this outing. Willi Weber was informed that Bertrand Gachot was in prison after he had sprayed a taxi driver with tear gas. This incident actually happened much earlier, but the Luxembourgish-French driver was not convicted until the summer of 1991. Gachot was sentenced to six months in prison, which saw Weber picked up the phone and got Mercedes to fish out about 350,000 Deutsche Mark (DM). When staying at the hotel, the German had to fork out about 1600 DM through telephone costs, because he wanted Jordan on the phone. It turned out to be all worth it in the end. Jordan, who was looking for a replacement at the time, initially had Keke Rosberg (at that time active in DTM) or Stefan Johansson (at that time without a seat as he was sacked by Footwork) in mind. Weber convinced Jordan to have Schumacher test and race at Spa-Francorchamps. Eddie Jordan was able to use the money and finally agreed.

During his first test, it became clear that Michael was better than the Irishman expected. In fact, within six laps the German was up to speed and felt the limit of the car flawlessly. In an interview in 2003, Schumacher said the following about the test: "I was very impressed when I first got in the car, the car was very fast, but it was also very difficult to drive. The first lap was the hardest, I I did not know what to do with the whole situation, after a few laps I came to rest and after a couple of laps I was settled." The German left no space through the corners and had speed from the first moments. The technical team from Jordan called Michael in after a few laps as they thought that he was over the limit. "That was not the case, he was right on the limit, but not over it," Trevor Foster said years later. "He impressed, we were watching his positive technical feedback, his approach and his raw speed."

Eddie Jordan this year said in a podcast from F1.com how the situation was for him in 1991: "Although it was an excellent debut year from a sporting point of view, I was seriously embarrassed by money. Bertrand (Gachot) was in prison, so I could sell the seat, and it did not matter who came in, I had a big name, but the group around Michael paid me $150,000 for that seat. I could not say no. I was in contact with a guy who knew he was talented, initially I sent him away, but later I found out that this driver would be good for the money, that's why I got him in put the car in. The rest is history. " And stunning was the German from the moment

he stepped into the car in Spa. His manager had lied about the fact that Michael had never ridden at Spa, but nobody could tell. Michael finished in seventh place in qualifying for the race. During Friday practice, he clocked a 1:53.290 which was good for eighth place. With this, he was more than eight tenths faster than his experienced teammate Andrea de Cesaris. Michael's fastest time on Friday was more than four seconds slower than the time Ayrton Senna drove in his McLaren-Honda MP4/6B. On Saturday, he improved to a 1: 1.212, more than six tenths faster than his teammate.

Michael Schumacher became the main hype for Sunday. It is estimated that for the Belgian Grand Prix of 1991 about 10,000 to 15,000 extra tickets were sold at the gates. Many German fans decided to venture to Grand Prix on Sunday.

During the warm-up session on Sunday morning, Michael improved his set-up for the race. He finally came to fourth place in the morning session. The expectations were very high. There was a 'buzz' around the circuit. Michael was an exceptional gift for Formula 1. Right from scratch, there was a future superstar on the grid. But from that seventh starting place, Michael did not go beyond Eau Rouge. The clutch had failed. "That clutch was completely burned out," designer Gary Anderson later said. "I had never seen anyone demanding so much of the material. In my time at McLaren I worked with great champions, but this guy had something special."

The switch to Benetton

Mercedes, Jordan and Formula 1 were impressed by the German after the marker he set at Spa. Jordan reached an agreement with Michael's management on Saturday tying him down the rest of the season, but this did not happen. The German decided to sign for Benetton. This was down to (made clear at a later stage) by Bernie Ecclestone. The Englishman wanted to keep Schumacher for Formula 1 and decided to contact Flavio Briatore. Briatore, who was appointed as the team boss by Luciano Benetton in the 1980s, eventually agreed to Ecclestone's wishes after a short period and gave Michael Roberto Moreno's seat. At first race for Benetton at Monza, Michael again qualified in seventh place. Again he was faster than his teammate, triple world champion Nelson Piquet, who had to recognize his superior in the German. Michael would eventually finish the race in, ahead of teammate Piquet and only seven seconds from Gerhard Berger's McLaren-Honda.

Behind the scenes, there was heavy fighting over the validity of his contract with Jordan. Jordan felt that Michael and his management had committed a breach, which should be decided before the court. In the end Jordan and Benetton came to a settlement. Jordan got the money that saw out Michael's contract and received Roberto Moreno as a bonus. The Brazilian was dumped by Benetton in favor of Schumacher. In 1991, Michael scored a total of four points. During a wet race in Barcelona, the German was in third place for a short time after he qualified within a second of polesitter Gerhard Berger. Later Nelson Piquet would indicate that this would be the 'turning point' in his career. "Schumacher was just a lot faster than me, I had no answer anymore."

Although Michael scored four points in his first three races for Benetton, at the races in Japan and Adelaide it became immediately clear that his lack of experience would bring him into stuffy situations. Michael crashed very hard during a practice session at Suzuka. He thought he could take the 130R turn full throttle, but slipped off the track and spun backwards against the wall. Schumacher would later explain: "When I had to undergo a medical check when I signed with Ferrari, the Italian doctor asked if I had ever broken my back. I did not understand what he meant,  but it turned out to be a crack. The doctor saw that the fracture had healed in a natural way and that this had been done years ago.

"I had of course had a heavy crash at Imola (1995), but could not remember which crash this would have caused. In the evening back to the hotel, I realised that it must have been that crash in Suzuka, and I am almost 100% certain that it happened there. " Schumacher also crashed in the run-up to the season finale Australian Grand Prix. Michael crashed at the last turn and drove over the back of the Brabham of Mark Blundell. The German would spin off the track during the rain-affected race on lap six.

In our third part, we will look the first full years at Benetton that would lead to two world titles.