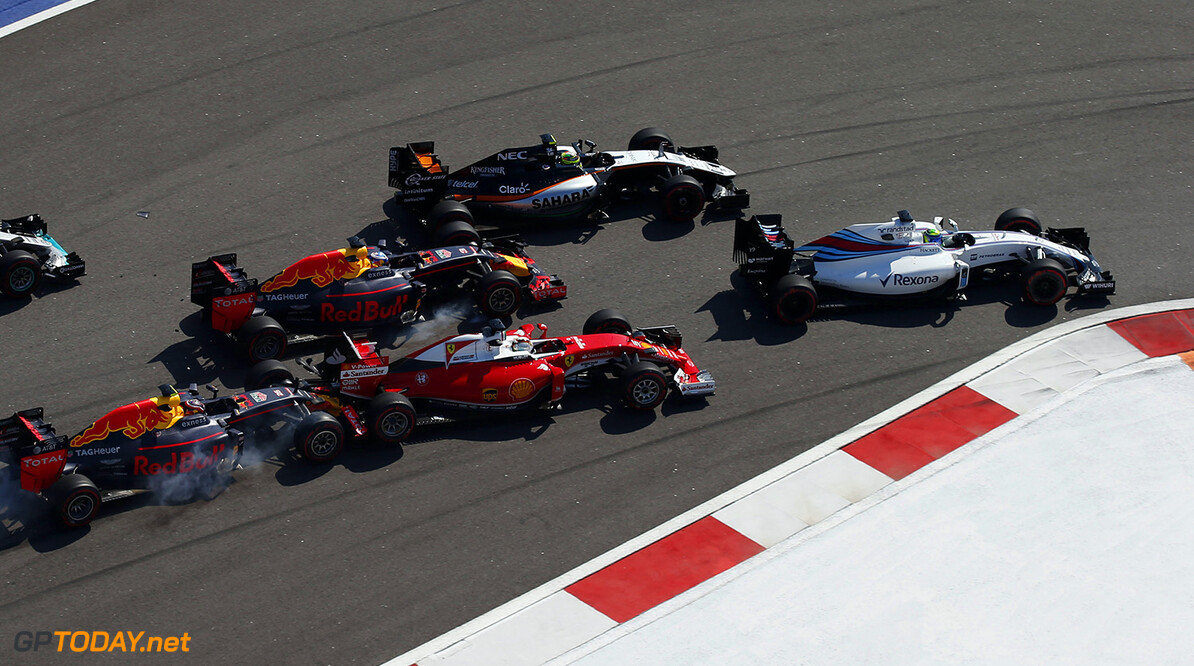 Marko needs to have 'serious word' with Kvyat

Maurizio Arrivabene on Sunday said Daniil Kvyat could mount no justified defense of his driving after colliding with Sebastian Vettel twice at Sochi. A foul-mouthed German Vettel was incensed after being punted out of the Russian grand prix by the young local, and even Kvyat's boss Dr Helmut Marko admitted the youngster was in the wrong.

"This time he (Vettel) was rightly annoyed, yes," Marko, referring not only to Sochi but another incident between Kvyat and Vettel in China two weeks ago, told motorsport-magazin.com. Asked what Vettel had told Red Bull officials after the Sochi incident, Marko revealed: "That we need to have a serious word with Kvyat, and he's right."

The incident comes at exactly the wrong time for the 22-year-old, amid speculation Red Bull will surely promote Max Verstappen to the senior team for 2017. Kvyat admitted he was in the wrong, but he also argued that he had simply been caught out ahead of the second rear-end contact that left Vettel in the barrier. "I'm not Superman," he told the Finnish broadcaster MTV. "If someone slows down in such a fast bend, I did not have time to react."

But Ferrari chief Arrivabene had no sympathy, joking when almost run into by a photographer ahead of a post-race interview: "Was that Kvyat?" Told that Kvyat had said Vettel suddenly slowed, the Italian responded: "When I look at our data, I cannot share this impression. I think you only need to look at the TV pictures and everything is clear."

"I have always promised you (the media) that I want to be honest. So I said after China that Kvyat did nothing wrong. I did not complain. Kvyat did his job in Shanghai. But this time I really can find nothing that would pass as an excuse for the Russian," he added.

Even Red Bull team boss Christian Horner admitted it had been Kvyat's fault. "He was perhaps a little overexcited because it was his home race," he told Bild newspaper. "But he's a young driver and he will learn from it."

F1 legend and Mercedes team chairman Niki Lauda was even more critical, telling the German broadcaster Sky that "If I was Vettel I'd kill him. The FIA should think about giving him a warning," the famous Austrian added.

Kvyat did, however, receive a ten second stop-and-go penalty and have 3 penalty points added to his F1 super license. "I think the punishment for Kvyat is enough," Igor Ermilin, the presidential advisor to the Russian automobile federation, told Tass news agency. "Kvyat might have been a little more attentive in the situation with Vettel, although it was very hard for him with the severity of the pressure of his home race," he added.

And then there is the pressure posed by the prospect of Kvyat losing his race seat for 2017. "To avoid this happening, he will need to make progress throughout the season and convince the team to sign a new contract with him," Nikolay Martsenko, a Russian driver and pundit, told Sportbox. "Or he will need to convince another good team, which is possible because there is enough time. I hope everything will work out for Daniil," he added. (GMM)