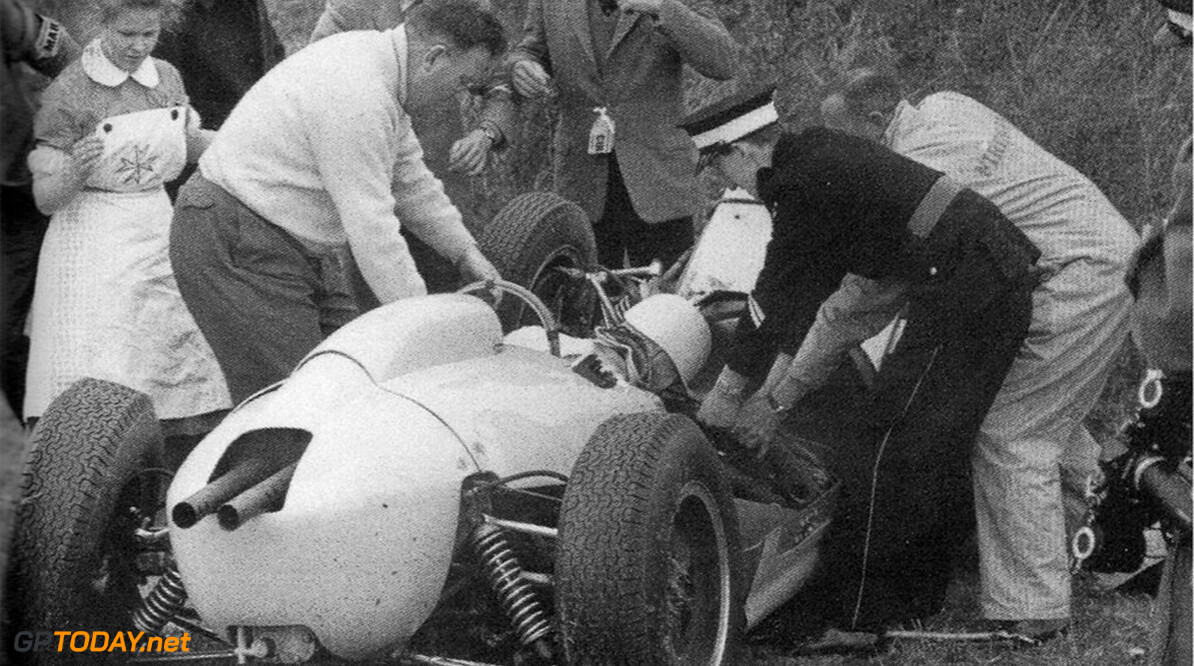 History: Either the doctor comes in, or the drivers get out!

"When I arrived at Brands Hatch for the first time, the medical centre was based in a room beneath the main grandstand (…) we had to carry the wounded driver down the stairs to a room with only a bottle of oxygen. Two marshals guarded it without knowing how to operate the damn thing."

When prof. dr. Sid Watkins voluntarily worked as a medical officer during a big go-kart event on Brands Hatch in 1961, he did not expect to find himself carrying a stretcher in-between beer and hotdog stands to be able to reach the little room under the grandstand. Nor did he expect the hospital to which a wounded Graham Hill had to be transported, to be a hundred miles away from the track. It is an almost fitting image of that time, not far from usual for the sixties racing scene. It is almost impossible to imagine how simple the medical facilities were in those days, if there were any. This week we are going to take a closer look at the development of the medical facilities in Formula One racing, telling the stories of Sid Watkins and Bernie Ecclestone who were the two prime actors in this development. Not only did they took the initiative like Jackie Stewart already did before them, they also institutionalized these initiatives in what is today the FIA Institute for Motorsport Safety & Sustainability. The incredible legacy of Sid Watkins is not to be explained in one article. We start today with part one.

Contrast is the key word of all the historical articles that are being written every week. 'Can you believe how primitive those days were?' In Formula One no greater contrast exists than the one between the medical facilities in the sixties and early seventies, and the current day facilities. To make this contrast apparent, let's sum up the current facilities. Shall we? The medical team active during the sessions consist of a total of eight cars. There are four S-cars (safety) that are to be the first cars at the scene of the crash. The S-car (not to be confused with the Safety Car) houses between four and six people with fire extinguishers and cutters to perform immediate assistance in life threatening situations. Also, there are two R-cars (rescue). These must arrive at the scene within 30 seconds and bring with them a doctor and four paramedics. The two remaining cars are E-cars (extrication) in which the chief medical service sits with two extrication specialists. The E-car is important for the heavy accidents that require the stabilization and extraction of the driver from his cockpit. Every paddock houses a permanent medical facility with a completely fitted OR and the necessary equipment to perform scans that are vital to assess the drivers' health before transport to a hospital. The medical facility is run 24/7 by three shifts, each containing an orthopaedic, anaesthetist and six paramedics. Transport of the driver to a hospital is performed by a chopper which comes with its own doctor and two paramedics. A back-up chopper waits outside the track together with two ambulances. A total of around ten hospitals are mobilized during a grand prix weekend. The primary hospital is on stand-by the entire weekend with two OR’s and two teams of doctors, anaesthetists and medics.  Clearly the medical service came a long way since Brands Hatch in the sixties.

If Jim Clark can die, anyone can

The turning point in how people thought about driver safety came with the regulation changes of 1967. The engine output was to enlarged. Together with the introduction of sponsorships and commercialization through broadcasting, the drive for car development started to exceed the limitations of the tracks. These were unaltered ever since they were created before or just after World War Two. Between 1967 and 1978 a total of fourteen(!) drivers lost their lives, and I haven’t included the Formula 2 casualties. Before 1967 the danger of Formula One was generally accepted. The key was to drive just below the limit. If you went over it, death was a possibility. So the drivers knew how to handle and maintain pace in a relatively safe way. From that perspective, the death of Jim Clark - renowned for his fine driving style- came as an utter shock. Jackie Stewart recalls: "We suddenly realized that if Jimmy could be killed, my god, anyone could be killed." External factors that could compromise driver safety started to rise. The GPDA under the rule of Jo Bonnier started to campaign for driver safety after Clark's death. Guardrails were to become mandatory at every race. A policy that got the GPDA to successfully boycott the 1969 race at Spa-Francorchamps. The medical facilities were still way behind. During the late sixties and early seventies, the medical units were no more than first aid posts in lorries, busses or even caravan's. Jackie Stewart even hired his own doctor that would take care of him every race weekend. Emerson Fittipaldi soon followed this idea. At first, the idea of your own doctor was perceived as unnecessary and diva-like behaviour. However, it did send a message to the FOCA (the early FIA) which, at the time, was an organisation that had to kneel for the race organisations who were not in the mood for spending money on silly safety procedures like permanent medical centres and guard rails all around the circuit. A definitive change in attitude was yet to be reached.

In the first half of the seventies medical facilities barely changed. A chief medical officer was now appointed for every grand prix by the race organizations. These were often doctors from nearby hospitals and operated from reasonably well equipped medical centres. However, the most important part of medical assistance during heavy accidents was yet to be developed: the immediate extraction of the wounded from their cars, off the track and to the hospital as quick as possible. Niki Lauda's crash at the Nürburgring in 1976 was a clear example of how quick extraction could save lives. The vast size of the track would make the response to any crash stupendously slow. However, within a minute the ONS (Oberste Nationale Sportkommission) was able to reach the scene where they took medical care of Lauda. Okay, it must be said that Lauda’s life was saved by the driver that got out of their car form him, but the ONS was an incredibly efficient medical intervention team that were on stand-by along the track in red Porsches. Staying in touch by portable radio, the Porches were manned by racing drivers with first aid certificates and doctors who were also certified firemen. Dr. Watkins was tremendously impressed by the ONS and would successfully cooperate with them numerous times. The S-, R-, and E-car concept would derive from the ONS. However, the medical standards elsewhere were still horribly low and at the start of the 1978 season, Bernie Ecclestone had seen enough.

In the old London Hospital at 07.00 pm on an evening in May, 1978, Bernie Ecclestone knocked on the door of professor of Neurology Sid Watkins. Looking towards the professionalization of the medical services during grand prix weekends around the world, Ecclestone offered Watkins the leadership over medical facilities that, over the years, would become regulatory and institutionalized within the FOCA. More importantly, Ecclestone granted Watkins a veto with which he could influence race organizations. If the medical facilities weren't up to Watkins' standard, then no grand prix was to be held. Ecclestone was not kidding. A lot of race organizations were not happy with Watkins’ appointment and were not happy to see some outsider come in and tell them what to do.  Understandably as Brands Hatch was not to be put on the calendar until the medical centre was moved from underneath the grandstand into a permanent facility in the paddock. Watkins created a medical check-list which had to be honoured by the organizations. An amazing example of Ecclestone’s radical use of Watkins' veto came with the German grand prix at the Hockenheimring in 1978. The chief medical officer, dr. Adami, was not allowed to sit with Race Control where Watkins awaited him. Watkins reported this to Ecclestone who in turn told Race Control to let dr. Adami in, or else he would let the drivers get out of their car, pack their bags and go home. Race Control objected by asking how this would affect all of the 85.000 disappointed spectators. Ecclestone replied: "You can tell them to go f*** themselves!"

Part two coming up next week