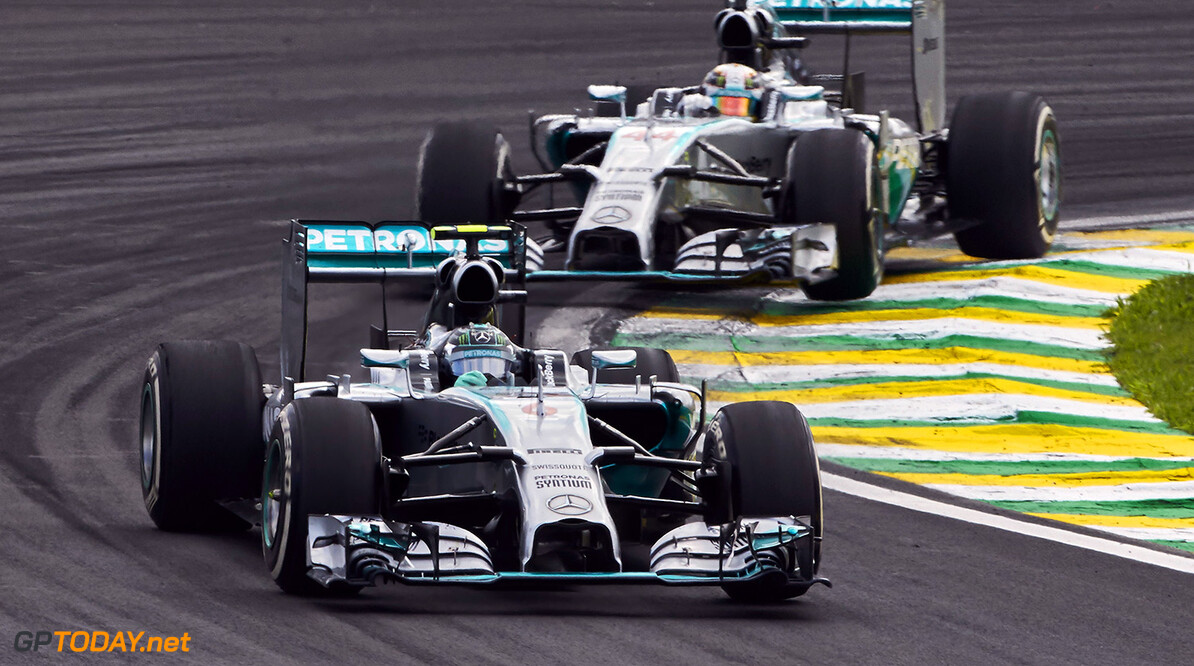 Lewis Hamilton: "Brazil was a great weekend for the team. Of course, it didn't go exactly to plan for me but second place in the circumstances was a good recovery and it was a great moment to get a record-breaking one-two finish for all the people who have worked so hard to give us this amazing car. I really felt like I connected with the fans in São Paulo and their support was just incredible - I still can't get over it now. That really inspires me heading into the final race of the season in Abu Dhabi. People talk about how long it's been since I won the title - but I honestly feel like I'm fighting for my first World Championship all over again. Sure, I'm older and maybe a little bit wiser than I was back then. I've learnt a lot in the years since 2008 - but I'm still the same driver. I still have the same hunger, the same will to win, and I've been giving it everything I've got from the word go this season. I've had ups and downs along the way - but I've never once given up. I've managed to fight my way back from whatever has come my way and my approach doesn't change for this race. I've got a good record at the Abu Dhabi circuit. Last year was actually the only time I've not started on the front row or finished on the podium. But I've also had some misfortune there over the years - particularly in 2012. I'm hoping that bad luck won't play a part this time around and I know that the team has been working flat out to make sure it doesn't. I'm feeling relaxed, I'm feeling confident and I'm ready to win."

Nico Rosberg: "After the disappointment of Austin, Brazil was just the way to bounce back with a great weekend for both me and the team. I felt in control from the very beginning and it was a big positive to take the lessons from Texas and put them into action. Of course, it wasn't enough to regain the lead in the Championship as Lewis drove a strong race to finish just behind me. But the gap is smaller than before and I absolutely believe I still have the chance to take the title in Abu Dhabi. It won't be easy, but I'll be full attack - just as I have been all season. Although this has been my first year fighting for a World Championship, I've never felt more comfortable than I have done this year. The team behind us have done an incredible job and it's great that they've given both of us equal opportunity to compete with each other. There have been difficult moments just as there have been amazing moments - but this is what Formula One is all about and I hope that everyone watching at home has enjoyed the story of this battle as much as I have. Win or lose, double points or no double points, I feel proud of what I have achieved this year and especially proud to have been a part of this fantastic season for the Silver Arrows. I go into this race with no fear and with every belief that this can be my title. It's not over until that flag drops!"

Toto Wolff, Head of Mercedes-Benz Motorsport: "To claim two one-two finishes from another pair of back-to-back races was a great achievement. When fatigue can so easily become a factor this late in the season, everyone has stepped up their game to ensure a record-breaking end to an incredible year. Of course, our drivers were no exception and Brazil provided another tense, exciting battle - once again demonstrating how evenly matched they are. Nico controlled the race in impressive fashion - particularly given the disappointment he felt after Austin - while Lewis proved his fighting spirit once again to recover from a spin and push his team-mate all the way. Now, they head to the final race with a World Championship on the line. When we look back through the season, each driver has had his share of ups and downs and both have shown great strength of character to recover from setbacks. As a team we are fortunate to have such a talented line-up and both are worthy champions in the eyes of everybody behind them at Brackley, Brixworth and Stuttgart. Of course, there will be bitter disappointment for one of them and great joy for the other. While it won't be apparent to them at the time, both have long careers ahead of them and they have proven their credentials for the years to come. You only have to look back to such great battles as that of Lauda and Prost in 1984 to see what can be achieved. This was the last title for Niki, who won that year, and Prost was defeated in that battle. But he then went on to win four Championships before he retired. A top driver always has the ability to engineer another opportunity and both our boys have proven themselves to be just that: top drivers. It is now down to us to ensure that this fascinating year concludes in the right way by giving Lewis and Nico a platform to settle the title purely on the track. It is fantastic for the sport to have such a finale in what has been one of the great seasons of Formula One. I for one cannot wait to watch the race in Abu Dhabi and I'm sure those at home feel the same. May the best man win!"

Paddy Lowe, Executive Director (Technical): "Brazil brought yet another exciting race with a great contest between Nico and Lewis and it was fantastic to set a new record for one-two finishes. In doing so, the team has surpassed a benchmark that I remember being set by McLaren during my first season in Formula One and one which I never thought we would see broken. That is still sinking in and is testament to what has been achieved by the team this year. In terms of the battle for the Drivers' Championship, it was a race which once again demonstrated how evenly matched our drivers have been all year and underlines the fact that either of them would be a worthy World Champion. Unusually for Interlagos, rain did not play a role in the weekend. What we did see, however, was the impact of a revised tyre selection. It was positive to see that, despite concerns during running on Friday, the tyres performed well in the race and added to the spectacle with a three stop race, which is a credit to the job Pirelli have done this season. We now look ahead to Abu Dhabi, which has been the scene of a number of exciting title showdowns in recent years - none with such intense focus as this season with double points on the table. We will be running the weekend exactly as we would normally do with the absolute aim of giving both drivers an equal and fair shot at the title. Nothing is more important in our minds and in our preparations as we approach this race. Yas Marina is an impressive facility, with the track itself containing a large quantity of corners and requiring high skill levels from the drivers to put together a fast lap. We can expect a significant following both at the circuit and around the world for such a dramatic conclusion to the season, so we hope to put on a good show."
F1 News Lewis Hamilton Nico Rosberg Pirelli Mercedes McLaren
<< Previous article Next article >>
.